What is ambition? Ambition is a passion or desire that never fails you and will never let you fail it, and therefore ultimately leads the downfall of an individual. Ambition is exactly what leads to the downfall of Macbeth in the play “Macbeth”, written by William Shakespeare. Throughout the play, Shakespeare effectively deepens our understanding of the theme of ambition through the characters, and how they pursue it. He also proves to shows that some forms of ambition can push people into becoming very evil and sinister.

Don't use plagiarized sources. Get your custom essay on
“ Destructive Ambition in Macbeth ”
Get custom paper
NEW! smart matching with writer

The unchecked ambition which Macbeth and Lady Macbeth encounter within Shakespeare’s play not only drives them to become ruthless killers but is the cause of the two characters meeting their demise.

Ambition is first seen when Macbeth and his friend Banquo have an encounter with a trio of witches, the “weird sisters”. The witches have a premonition and they tell Macbeth he will be “Thane of Glamis,” “Thane of Cawdor” and “king hereafter”.

Macbeth then says, “My thought, whose murder yet is but fantastical, shakes so my single state of man that function Is smother’d in surmise, and nothing is but what is not” (I.III.149-152). This shows that ever since Macbeth heard the prophecies that promised him power, his mind descended into a disoriented state as strange as it was Macbeth instantly thought about murder without the witches ever mentioning murdering anybody. This also shows that the witches prophesy awakened a murderous ambition in Macbeth, which could’ve been there all along.

After this occurs Macbeth immediately wrote a letter to his wife telling her about his meeting with the witches. And as soon as Lady Macbeth finished reading the letter from her husband, she becomes so anxious to the point that she could not wait until the arrival of the King. She asks all the evil spirits to plunder her feminine nature and pour into her body the cruelness of a man. “Come, you spirits that tend on mortal thoughts, unsex me here, and fill me from the crown to the toe topfull of direst cruelty!” (I.V.43-45) not only is Macbeth vaulted by ambition, but so is his wife Lady Macbeth.

In the play, Lady Macbeth is shown to have a strong hold over her husband. She is shown as a very manipulative woman, who will stop at nothing to see that her husband gets what is foretold to him. Throughout the play, she makes the decisions for Macbeth. The best example of this occurs when, Lady Macbeth says, “Their drenched natures lie as in a death, What cannot you and I perform upon Th’ unguarded Duncan? What not put upon His spongy officers, who shall bear the guilt of our great quell?” (I.V.75-79). This shows us how devilishly ruthless Lady Macbeth is. She will deliberately ply everyone with alcohol to ensure their “swinish sleep”. Macbeth is impressed by her cunning and agrees to follow through in murdering King Duncan. This really shows how Lady Macbeth’s provocation enlivens the evil ambition residing in Macbeth and how she manipulates Macbeth.

After Macbeth killed King Duncan with a dagger his body was later found by a character named Macduff, who is a Scottish nobleman, also known as Thane of Fife. Macduff plays the role of the hero in the play as he ends the tyranny of Macbeth’s rule of Scotland. In Shakespeare’s message of the destructive power of ambition, Macduff is shown to be someone that uses ambition positively despite his great strength and qualities he does not seek a higher rank but instead stays loyal to his country. When Macduff says, Either thou, Macbeth, Or else my sword, with an unbattered edge, I sheathe again undeeded. There thou shouldst be; By this great clatter, one of greatest note Seems bruited. Let me find him, Fortune, And more I beg not” (V.VI.22-27). This shows that when Macbeth murdered Macduff’s family that brought out Macduff’s ambition, the ambition to avenge his wife and son, along with the ambition of bringing justice back to his country and kinsmen. Macduff didn’t seek power for himself he was a very content character. When Macbeth murdered King Duncan to become king, Scotland suffered enormously of political chaises, and especially Macduff, who lost his entire family, decided to overthrown Macbeth. But the ambition that existed in Macduff was the good kind of ambition, unlike the murderous ambition for power Macbeth and Lady Macbeth had. Macduff’s ambition caused him to develop reasonable motives and not going against his nature and morals, contrasting the overwhelming ambition that lives in Macbeth.

In conclusion, ambition drives many people to accomplish great things, but it also can destroy a life, as it did in Macbeth. In Macbeth, Shakespeare demonstrated another deadly flaw of our mankind, which is unchecked ambition. When overly ambition goes along with moral constraint, selfishness, and violence, it is impossible to stop. Because having too much of something can be very dangerous, it makes a person lose sight of what is truly important, leads them to the wrong path, and finally to their downfall. At first, Macbeth maintains control and channels his ambition into helping those he is loyal to, but after hearing that he could be king, he yearns for more. Once he takes drastic measures to try and kill King Duncan, he is plagued by regret and knows he has been forever damned for his actions. In the end, ambition becomes their greatest weakness and contributed to their destructions. 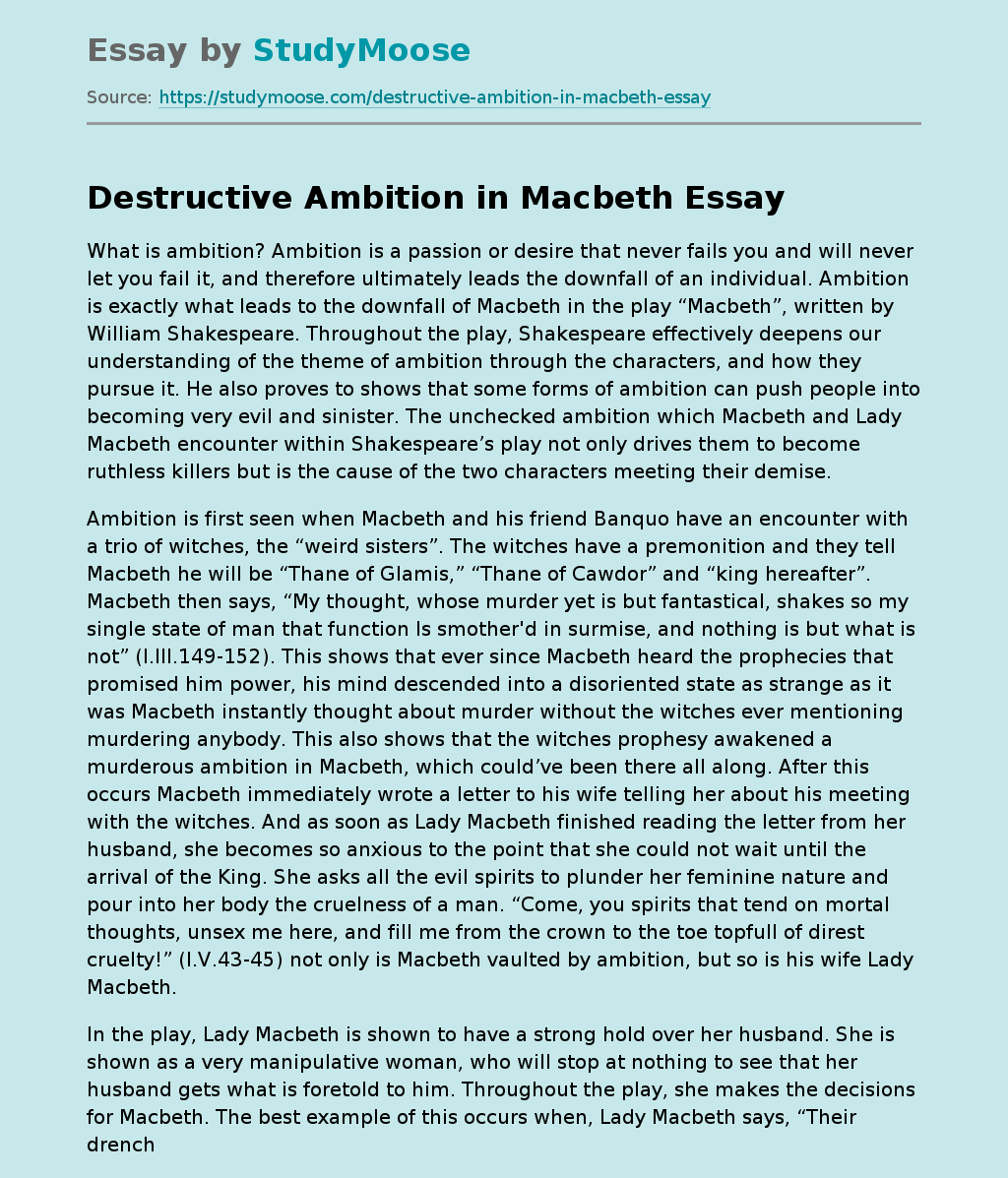