Two vast classifications of fiction most readers would agree to be are commercial fiction and literary fiction. The commercial fiction focuses on bringing pleasure to the readers and satisfying the readers’ expectations at the end of the story. While the literary fiction focuses on giving the reader an understanding and enlightenment about human nature and society. “The Destructors” by Graham Greene is a short literary fiction story about the loss of innocence of a gang of adolescents thru destruction. It is a dramatizing story were destruction can happen anywhere.

Don't use plagiarized sources.
Get Your Custom Essay on Destruction is Creation Just from $13,9/Page

Dramatizing the rebellion of a gang of adolescents who had grown up during World War II, the characters are extremely affected psychologically and team up against society. This literary story helps the reader understand the characters’ mischievous ways, the society’s complexity of moral issues, and the destructors creation. The Wormsley Common Gang is built of mischievous adolescents who lived thru the World War II madness and destructions. The protagonist, Trevor, or “T” called by the other members, has been deeply affected by the city’s demolition which is why it is he who gets the wrecking idea to destroy Mr.

Thomas’ house. “We’ll pull it down. We’ll destroy it”, T. says to the gang. Blackie, the ex-leader of the gang starts out in the story with victimless troublesome shenanigans. By the end of the story however, Blackie is fully supportive of the plan to destroy Mr. Thomas’ house. The society’s complexity of moral issues is demonstrated by the protagonist, T. Greene states, “There was a reason T., as he was afterwards referred to, should have been an object of mockery.”

Trevor’s name is common is the upper-class level and is a symbol of his formerly affluent lifestyle and by accepting the change, T., given by the gang, the gang accepted him instead of laughing at him for down grading to the lower-class. Trevor says to Blackie, “Nobody’s going to steal anything from this house. I kept these for you and me, a celebration. We’ll burn them, one by one.” Trevor shows the gang no care for class distinctions and disregard for wealth by burning all of Mr. Thomas’ hidden life savings. . T. has resentment for the house and ruined the house out of anger and jealously because it is something the gang wish they had and it is something that symbolizes upper-class. It is said in the story, “Destruction after all is a form of creation”, meaning that by destroying the house, T. thinks he’s creating an equal quality society and also creating the gang a more criminal identity. By Trevor accepting the shortening of his name, T. demonstrates change on himself thru destruction. When the gang is done destroying the house from the inside, the gang ties a rope to the back of a lorry and that’s tied to a great wooden shore that supports Mr. Thomas’ house. The next morning someone gets into the lorry, drives off and takes the house down with him. While Mr. Thomas cries out for his house, the driver can’t help but to laugh and says to him, “There’s nothing personal, but you got to admit it’s funny.” The driver is helping Mr. Thomas understand that it wasn’t about him, it was about something bigger, it was about his house.

This big old house that everybody saw everyday stand there with such dignity between the bomb-sites like a man in a top hat. And in destroying his house, the gang inadvertently create for Mr. Thomas the possibility to more beyond his “Old Misery” by eliminating the anchor tethering him to a difficult past. This literary short fiction implies itself with characters that have flaws such as T. who went from living in a great environment to living in the Wormsley Common Underground Station living in poverty and knowing what it is like to suffer. The society class levels doesn’t matter to T. and it’s proven thru out the story. T. wants everybody to be the same, no lower class, no upper class, just one society, and gets the idea that by destroying Old Misery’s house he’ll accomplish. The characters deal with real life society tragedies that can enlighten a reader. The gang of adolescents lose their innocence thru the bombing of World War II because the characters have experienced destruction, war, and life changing tragedies. The effects of the two world wars (World War II and T.’s and the gangs’ war) have given birth to a new and grimmer society, as represented by the gang. The characters experience that by destroying something, change comes along with it and a new creation can be created. 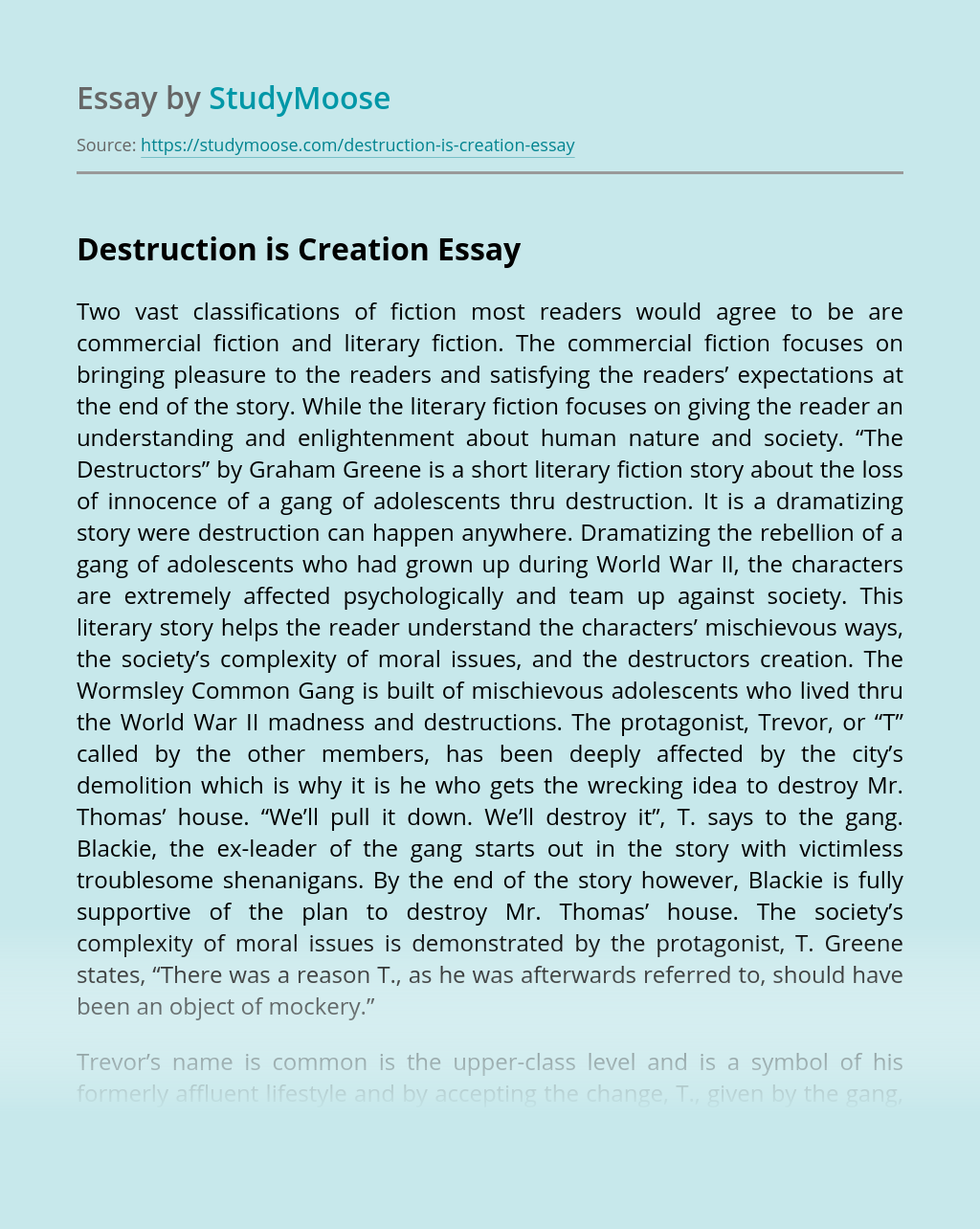 The age old question of how will we power our homes and lives in general moving forward when all the oil runs out, and one day it will. The world needs to move in a direction that will lead to energy independence however businesses and society is slow to move because we cannot see the... VIEW ESSAY

Our voice is the one thing that makes us in the world. It is what we stand for. It is our way of to say something, to stand up for something that is close to our hearts. I was in Grade 10 and I was sitting with my friends at break. I was eating my... VIEW ESSAY

Tourism is third largest industry in the world and according to the report of World travel and Tourism Council tourism industry generates approx 12% of world GNP (Agyei and Samuel, 2006). Heritage and culture has always been one of the most significant aspects of world tourism. People live their lives against rich environment formed by... VIEW ESSAY

The neuroscience perspective is going to look for the causes of abnormal behavior primarily inside the individual. A psychologist studying the behavior of Amy Winehouse using the neuroscience perspective may explain that her reason getting addicted to drugs is because the body and brain enable emotions, and brain circuits may cause Addiction. Once the brain... VIEW ESSAY