“We hold these truths to be self-evident, that all men are created equal, that they are endowed by their Creator with certain unalienable rights, that among these are life, liberty, and the pursuit of happiness.”– “The Declaration of Independence”, 1776 –Thomas Jefferson. Many people believe that their future is a matter of chance and they don’t have the control over it. But these are only pagan faiths. We all were born equal and good; there is no such a notion as a bad baby.

Therefore, man’s future life is a consequence of his own choices. All people are different and thus they have different lives. Destiny is the flow of the circumstances; the predetermined course of events but entirely our actions can foreordain it. Only the right choice can lead to wanted and expected destiny.

There are still people who believe that their destiny is decided long before their birth, they think they have no connection with their fortune. Nowadays these are only pagan beliefs.

In ancient Egypt, they thought so and they even had some gods of fate. For example the goddess Lakshmi, who, like Hathor, was a powerful goddess of beauty, good fortune and benevolence. With the penetration of Christianity in human’s life, these faiths are beginning to die. Presently most people think their destiny is everything but a matter of chance.

All people were born equal and good and their future depends only on them, on their choices in life, on their ability to cope with difficulties without losing their own values. A great example of people’s choice can be found in “Lord of the Flies” by William Golding. Several boys are on a desert island and in the beginning, they are all the same, they are good. But later on when obstacles arise, everyone decides how to continue life and thus he chooses and predestinates his fortune on his own. Some became more sensitive and vulnerable, some get stronger, some kill, some are killed but everything that happens is a consequence of boys’ choices.

The wanted and expected destiny can only be an effect of right choices. The correct choice requires to be maximum clear what exactly we choose, why we do it, what we want to become as a consequence of our choice, how our life will change, what we are giving up and with what we will never do a compromise. If we can answer these questions then we will take the right decision and we won’t be disappointed of our fortune.

As a conclusion I can say nothing but a famous quotation because when great people said it there is no point for me to paraphrase it: “In every act of moral self-affirmation man contributes to the fulfillment of his destiny”. P. TILLICH 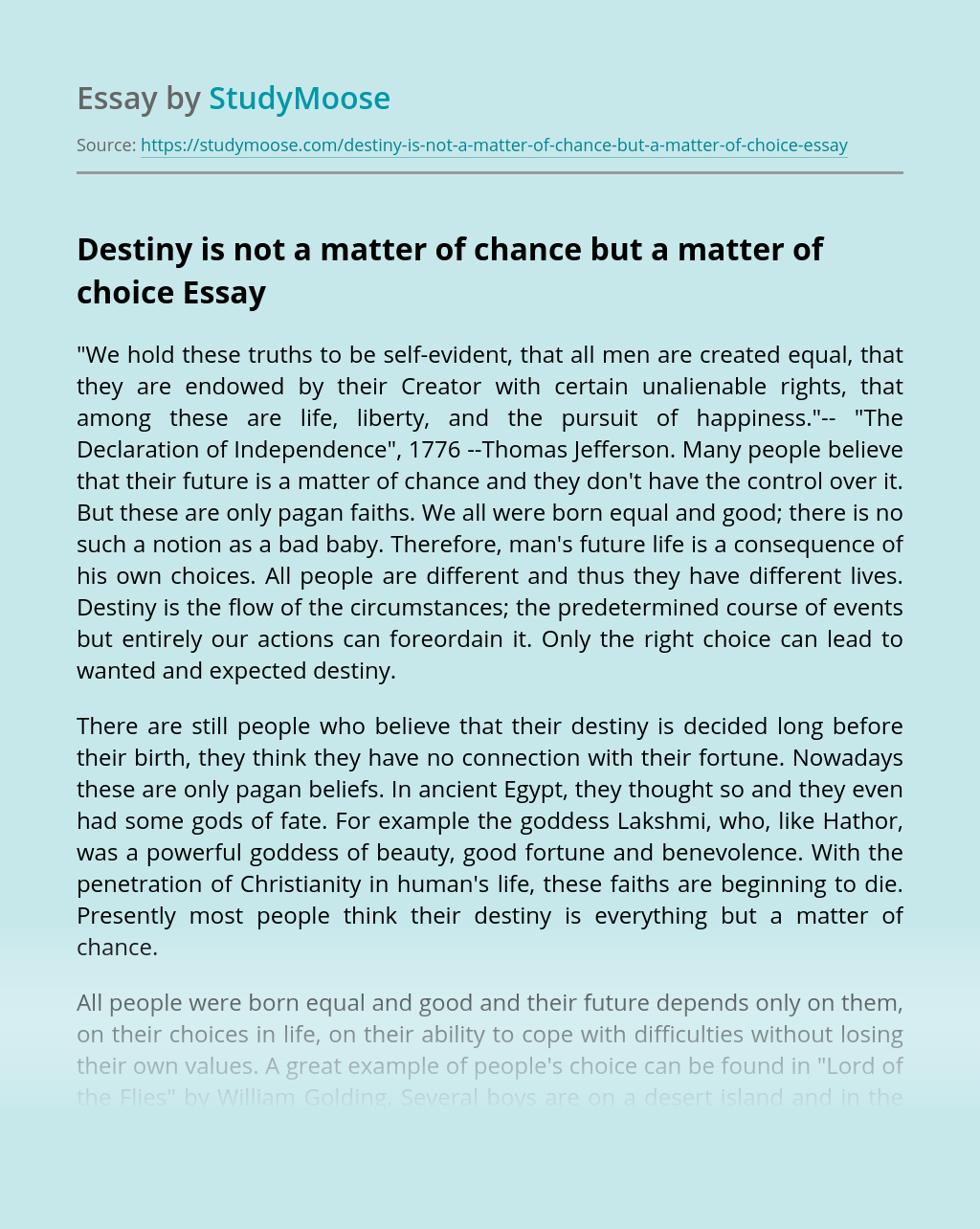 The wedding between Jurgis and Ona is an epitome of the various problems in Packingtown. The way the saloon keeper took advantage of the couple is representative of the dishonesty and thievery from the surrounding society. The crowd stranded outside the wedding symbolizes the helpless and hungry inhabitants of Packingtown. When the newlyweds allowed these... VIEW ESSAY

The Government of Pakistan is a federal government established by the Constitution of Pakistan as a centralized governing authority of the four provinces of a proclaimed and established parliamentary democratic republic, constitutionally called the State of Pakistan. The order of operations constitutes a Westminster system, and it comprises three branches of government: the executive, the... VIEW ESSAY

Most people have manifestations of fear and sadness relating to human distress and report to seek counselling or drug treatment for common emotional difficulties such as phobias, loss of a job, bereavement and terminal illnesses. Medically these emotions are classed as ‘anxiety or depression’ and defined as ‘mental health problems’ (Barker e t al, 2010).This... VIEW ESSAY

View sample
Organizations ought to endeavor to keep urgent data inside

Organizations ought to endeavor to keep urgent data inside while keeping any dangers outside. All elements recognize fundamental security by having secure bolts on the entryways and entrusting a few workers with the keys to confined regions. It is expensive just as tedious for your business to key and rekey each time that a key... VIEW ESSAY