Every year in Pamplona, Spain from July 7th to the 14th there is a huge event called the festival of San Fermin. It’s a religious festival in honor of Saint Fermin. During the festival there are parades, fireworks, bullfights and sports but the most popular even is the running of the bulls. In the 3rd century a Presbyterian man named Honesto was sent to the city of Pamplona to evangelize to the people there. His son was named Fermin. Fermin was eventually ordained into the priesthood.

Don't use plagiarized sources. Get your custom essay on
“ Description of San Fermin Festival Customs ”
Get custom paper
NEW! smart matching with writer

Later Fermin returned to Pamplona and became their first Bishop. Throughout his life he baptized more than 3,000 people. Because he was their first Bishop they decided to name the annual festival after him. Everyday weeklong event starts off with the running of the bulls. The local name for the competition is “encierro”. Encierro means to fence in/to lock up. There are 15 bulls that are released but only 6 will be chosen to be in the bullfights.

Because the distance from the corrals to the bullring is only ½ a mil the race only lasts for 3-4 minutes. One of the longest races lasted 15 minutes and it was because a bull had escaped from the group and wandered up a side street. Obviously it is very dangerous to be in the race. Because the streets are so narrow there’s only enough room to put fencing up in certain areas. The minimum age to be able to enter is 18 because it’s so risky and so many people get hurt and/or die every year. Since 1924 only 14 people have died which is a pretty low number compared to all the thousands of people that join the races every year. Unfortunately between 200 and 300 people are injured every year. The most well-known death cause by the running of the bulls is Matthew Tassio’s. He was a 22 year old American who had just graduated college and decided to travel to Europe with his friends for the summer.

On July 12th 1995 Matthew had been out really late partying with his friends. Still drunk the next morning, he decided to join in the running of the bulls. Sadly he ended up getting his stomach gorged out by the horns of a bull. He disobeyed the most important rule of running with the bulls- Once you’re down don’t get up until the bulls have all charged by .The reason his death became so well know is because he was the first foreigner so be killed by one of the bulls. Daniel Jimeno Romero was that last man to be fatally wounded and that happened in 2003. Like all races and competitions the bull run has several rules. Some of them are: No climbing over fences, Don’t hide in corners, dead ends or doorways on the route before the release of the bulls, if you’re drunk or on any kind of drug you will not be able to race or be near the race and you have to wear a traditional San Fermin costume. In Ernest Hemingway’s The Sun Also Rises, he wrote about the running of the bulls and because of that it has become a global attraction.

The origin of the actual bull running came from Northeastern Spain during the fourteenth century. In order for Farmers to transport their cattle they would scare and prod the bulls up the street in order to make them move them from corrals to the bull ring where they would be killed later that night. On the way to the bull ring children or young men trying to show how brave they were would jump in front of the charging bulls trying to impress their peers. After several years of this game, running with the bulls became a competition. The ultimate goal is to reach the bulls’ pen without getting trampled or gored. However very few people are able to do this. 6 bulls are driven into a corral at the bullring and later that night they are used for the bullfights. The most famous running of the bulls is in Pamplona but Portugal also holds the event. Some cities in Mexico also have it. The San Jose Festival in Trujillo, Peru is another place where the running of the bulls is popular. If you want to watch the bull running then its broadcasted live every year on 2 national channels. 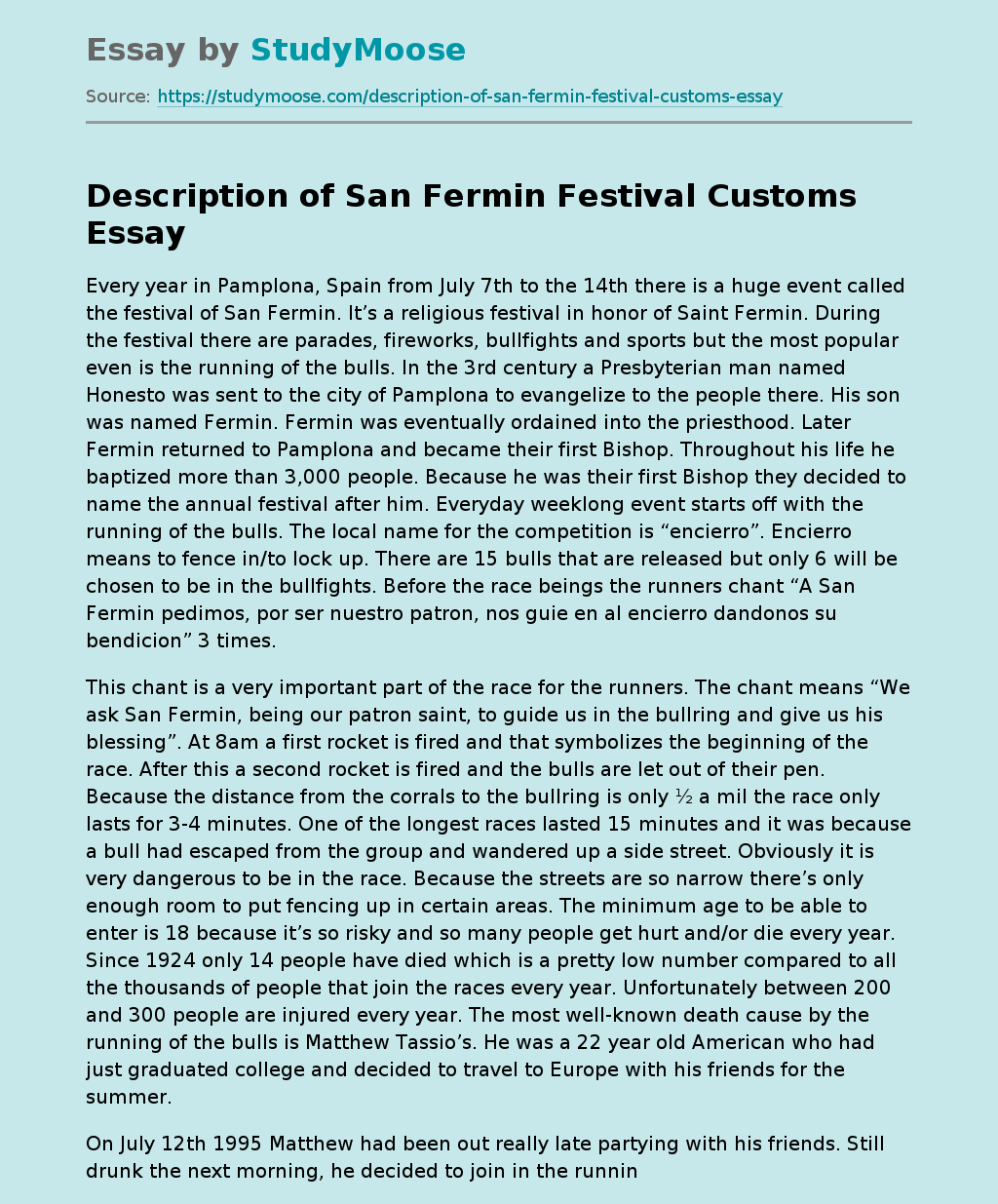