Description of Film "The Blind Side and Invictus"

Through Life you can learned many different lessons and in the Film The Blind Side and Invictus shows us many life learned lessons and hardships . The Blind Side and Invictus both present the issues of uniting each other through the sport each movie present in the film, but The Blind Side shows the determination in helps other can be good, the Invictus show us that even what life put Mandela through many trials and tribulations and did what was right to help others and bring them together Both Firms are based on a true story and both formulaic about show us an expected win on there playing field.

Don't use plagiarized sources. Get your custom essay on
“ Description of Film “The Blind Side and Invictus” ”
Get custom paper
NEW! smart matching with writer

We see that Invictus is concern about the destiny of the nation and it’s instances for the continent, the firmness on the tone of respectful nobility strips the movie of any intensity Nelson Mandela, who was played by Morgan Freeman, is an considerate, courteous, firm, and logical, but these characters, so vital to the leader magnetism, do not offer themselves to drama.

In The Blind Side, how Mrs. Tuohy showed her moral, trustful, respectful and compassionate women. How The Blind Side and Invictus showed how Nelson Mandela and Mrs.

Tuohy has an open heart for helping others and standing up for what is right. For example, in The Blind Side how the family brought in Michael Oher and helped him and treated him like their own child. In the film Invictus how Nelson Mandela showed the rugby team what they was playing for and team the leader how to lead by example.

Also How Mandela was elected president and was trying to make a racial change in the county. He started with his security originally there was 4 black on his security team for the rugby team but he made four white members to the list so it could be equal rights.

By contrasting, the small story of Micheal Oher and his new white family is enthusiastic charged and active. Sandra Bullock plays Mrs. Tuohy the mother as an energetic, woman powerhouse who will not cooperation her tight designer clothes and jewelry when she walks in the ghetto in Memphis, Tennessee. At one point, opening her ears to the depredation and hoots of a good old southerner as her son messes up in a few place at the beginning of the game, she stirs herself to a harden magnolia side, to face the man and threats to close that “Crotch-mouth “ for him if he will not do it himself.

She is the mother every kids wants- very protective and not afraid to voice her opinion or follow her heart. As a desire performances that thrills the subject able because Sandra Bullock do not look nothing like mother Theresa but have the similar dignity and purpose. This is a rare example of a movie that is popular without trying to dumb it down it subject to achieve its point. Both movies had something similar with each other. The similarity was that they both use sports to bring and unite each other.

In the Blind Side the team and family can together through Big Mike and he help them persevere through tough time and show never to give up and never to quit in life. She his background and how someone came along and helped him and in the Invictus how the country united through the sport of rugby. In concluding, the Blind Side shows us that the brightness of helping other through the situation can be for the good of the person. In the Invictus show how Nelson Mandela has brought the nation of South Africa together through the sport of rugby and grown as a continent. In comparing that the both us sports to bring thing and each other together.

Description of Film "The Blind Side and Invictus". (2018, Oct 07). Retrieved from http://studymoose.com/description-of-film-the-blind-side-and-invictus-essay 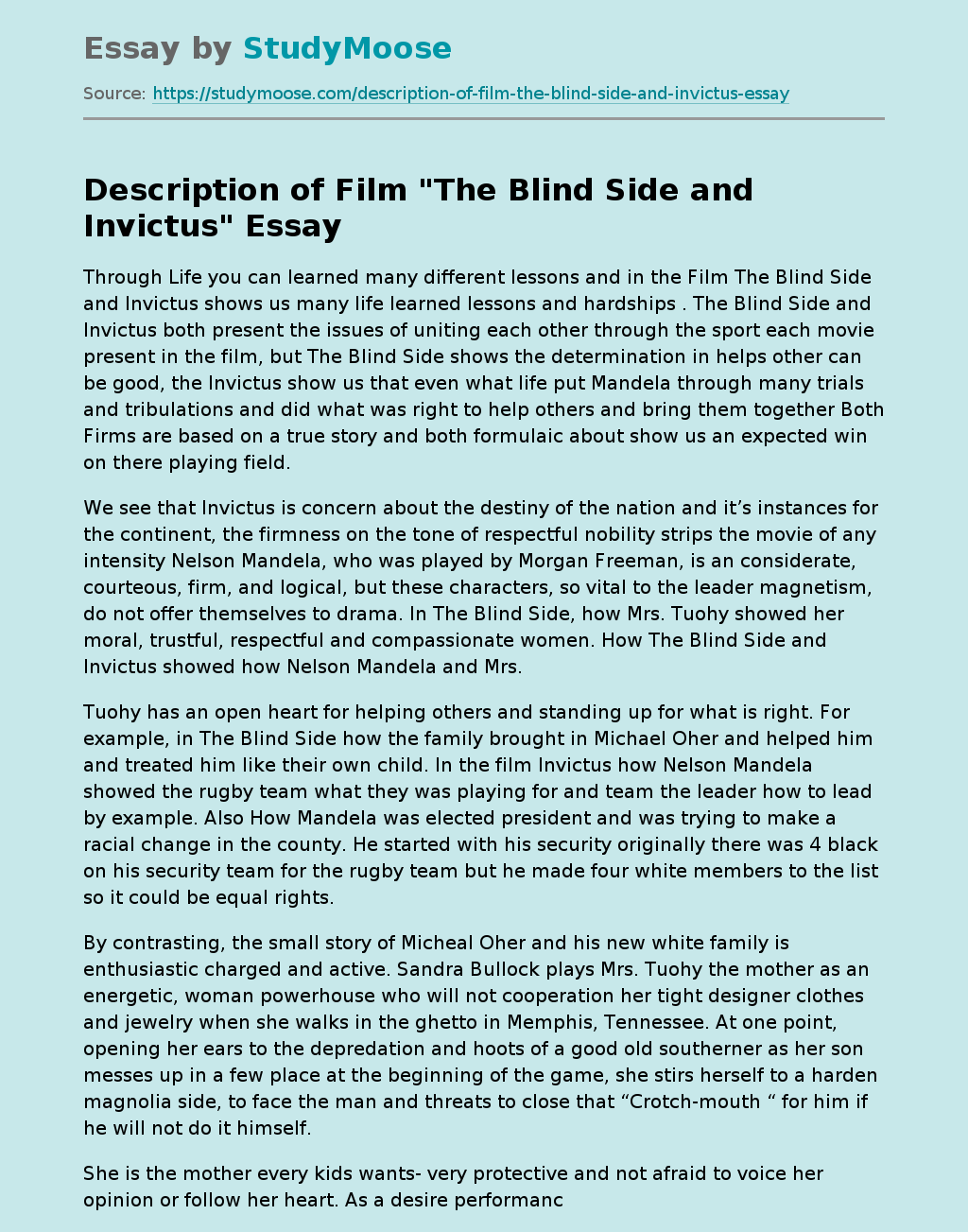