Describe why schools have policies and procedures

Identify the main types of state and independent schools and describe the characteristics of different types of schools in relation to educational stages and school governance.

Turn in your highest-quality paper
Get a qualified writer to help you with
“ Describe why schools have policies and procedures ”
Get high-quality paper
NEW! AI matching with writers

However, foundation and trust schools are run by the governing body but are maintained by local authority. They employ their own staff and decide their own admissions policy and the land and building are usually owned by the governing body or charity and is non-profitable. Both examples follow the national curriculum and the educational key stages.

The responsibilities vary for example community schools governing body consists of a specific number of governors for various categories, the following categories are parent governor, staff governor, authority governor and community governor. Foundation and trust schools usually decide their own governing body. Both have the role of monitoring schools process and setting targets. So basically they are both state school, but local authority runs community and foundation and run by governing body but maintained my LEA.

Independent schools are not maintained by local authority or central government, they do not have to follow national curriculum but most choose to do so. The head and the governors decide on admission policies and staffing and the framework and structure of the school, they are obliged to register with the DfE so they can be monitored by ISI. They are profit running schools and some have charitable status so they can apply for tax relief. Most independent schools educational stages are as follows:

The different types of independent schools are based on where the schools funding comes from for example. Parochial schools are mostly funded by religious groups and managed by the religious institution to which they belong. The schools are usually governed by interim executive board of governors where they have foundation governors which are appointed by the religion they are associated with. One of the main missions would be to teach the religion the school is associated with. Whereas proprietary or private career schools they are profit based schools and the schools directors are not ruled by the governing body if they choose to have a governing body. The main mission for these schools would be occupationally related education and market related. Whereas if proprietary school choose to have a governing body it is a limited system of governance, they are chosen by the governing body there and the proprietor with the proprietor having the final say in all matters.

Describe why schools have policies and procedures. (2016, May 13). Retrieved from http://studymoose.com/describe-why-schools-have-policies-and-procedures-essay 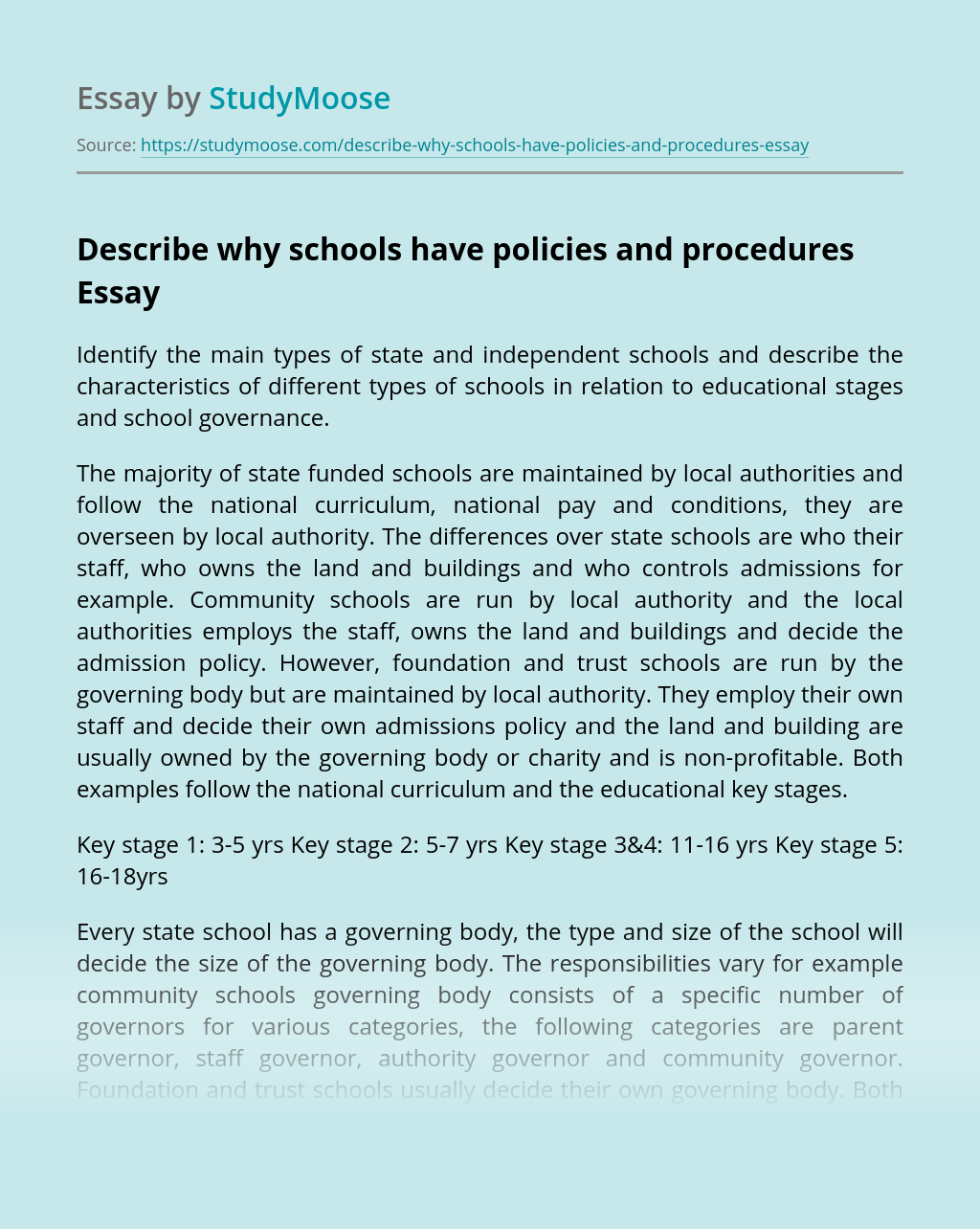 Turn in your highest-quality paper
Get a qualified writer to help you with
“ Describe why schools have policies and procedures ”
Get high-quality paper
Helping students since 2015
Stay Safe, Stay Original