Describe what can happen in the society without law, especially in the field of business

– Fraus omnia corrumpit (theory of fraud), according to which one can never rely on a fraudulent act to justify the application of a rule of law to its own profit. The scope of application, the conditions of application, and the legal effects thereof will be defined, since they are subject of debate. Further, the relation between the principle Fraus omnia corrumpit and other concepts or general principles of law will be examined.

For this, the discussed principle can fulfil three possible functions (with each time different legal effects): a mere explanatory function for other concepts of law; a corrective mechanism which excludes the application of rules of law in case of fraud; or the function of a fully autonomous concept of law.

Don't use plagiarized sources. Get your custom essay on
“ Describe what can happen in the society without law, especially in the field of business ”
Get custom paper
NEW! smart matching with writer

The results of this research will provide a new insight into the role of general principles of private law in the hierarchy of sources of law. The correct scope and function of the principle Fraus omnia corrumpit are still uncertain in law due to a lack of fundamental research, contrary to other systems of law.

Innovative research (according to internal and external comparative law and a functional-inductive approach) will result in fixing the contours of this principle, which will lead to higher legal certainty. – Non bis in idem,

Ne bis in idem, which translates literally from Latin as “not twice in the same [thing]”, is a legal doctrine to the effect that no legal action can be instituted twice for the same cause of action. It is a legal concept originating in Roman Civil Law, but it is essentially the equivalent of the double jeopardy (autrefois acquit) doctrine found in common law jurisdictions.

The principle of in dubio pro reo (Latin for “when in doubt, for the accused”) means that a defendant may not be convicted by the court when doubts about his or her guilt remain. It is often used specifically to refer to the principle of presumption of innocence that dictates that when a criminal statute allows more than one interpretation, the one that favours the defendant should be chosen.

The Latin phase in dubio pro reo translates as in doubt, for the accused. A more expanded definition is that courts and juries must take the side of an accused party when there are doubts about the charges. This is connected to reasonable doubt and to presumed innocence, which are a foundational part of many justice systems. It also affects the rule of lenity, when judges must make interpretive decisions about ambiguous laws in favor of someone who is accused.

Describe what can happen in the society without law, especially in the field of business. (2016, May 16). Retrieved from http://studymoose.com/describe-what-can-happen-in-the-society-without-law-especially-in-the-field-of-business-essay 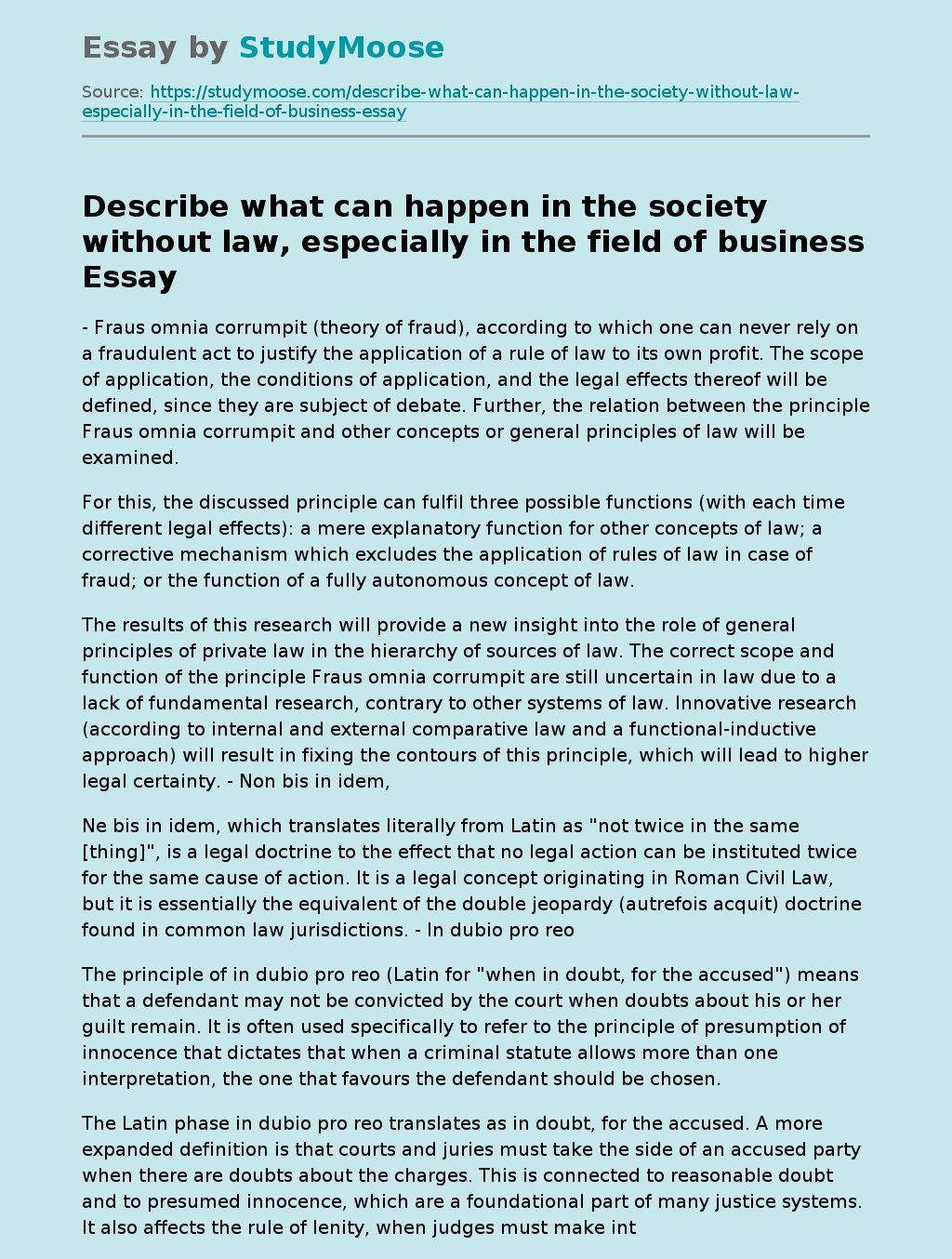