Describe the characteristics and cause of challenging behaviour

In case study 1 Winston is physically aggressive. However over recent months he has become very withdrawn, extremely grumpy and agitated. In the case study it says how Winston wife known as Ruby was assisting him to get ready for bed when he lasted out punching her in her chest. This shows he has become physically aggressive. The characteristics for his behavioural change, was that he shouts obscenities loudly, especially in the evening before going to bed. The cause of his behaviour is due to the fact he had Alzheimer disease.

Turn in your highest-quality paper
Get a qualified writer to help you with
“ Describe the characteristics and cause of challenging behaviour ”
Get high-quality paper
NEW! AI matching with writer

3. What are the causes or triggers? Winston has Alzheimer Disease. This is a type of dementia. Dementia is a group of symptoms which affects the way the brain functions; this could also affect the way Winston behaves as he could become aggressive. The cause of Winston’s anger is due to his physical illness, (Alzheimer Disease) this makes it difficult for him to do some activities and that’s why he has the help of his wife.

Sean’s 21 years old and has been living with his auntie for the past two months because life at home has been very uncertain due to his parents going through a divorce. He does not know his auntie very well and is slightly uncomfortable to talk to her about his personal issues. Sean regularly attends youth club and enjoys meeting his friends from school there. She asks him about his career history and he doesn’t seem to like it as he responds abruptly. He suddenly appears to be very offended by the questions and starts to swear at the support worker repetitively and says ‘what do you need to know this for?’ He gets up and says ‘Forget it’. He starts to walk away while shouting racist comments towards the support worker.

1. What type of challenging behaviour is being displayed? In the case study it says Sean’s, ‘starts to walk away while shouting racist comments towards the support worker.’ This shows that his behaviour is challenging and he shows this verbally.

3. What are the causes or triggers? Sean’s behaviour is could be caused due to the fact his mother and father are separated and divorced. Because of this, he may feel unhappy and stressed. When his support worker questions him about his employment history he might have been worried about being judged.

Describe the characteristics and cause of challenging behaviour. (2016, Oct 01). Retrieved from https://studymoose.com/describe-the-characteristics-and-cause-of-challenging-behaviour-essay 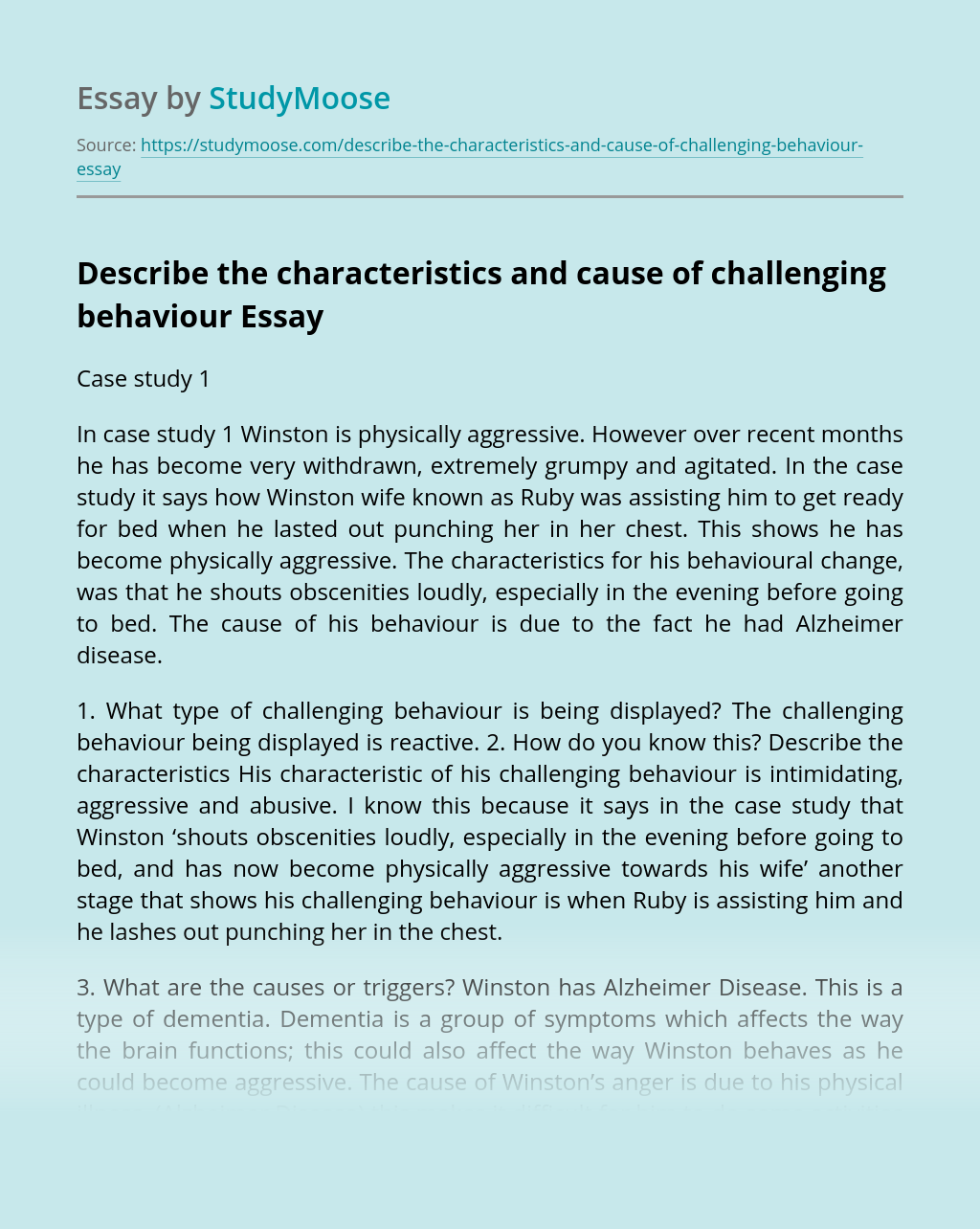 Turn in your highest-quality paper
Get a qualified writer to help you with
“ Describe the characteristics and cause of challenging behaviour ”
Get high-quality paper
Helping students since 2015
Stay Safe, Stay Original