Describe Plato Allegory of the Cave

Describe Plato allegory of the cave (25 marks) Plato is one of the most important Greek philosophers and a pupil of Socrates. He founded the Academy in Athens, an institution devoted to research and instruction in philosophy and the sciences. His works on philosophy, politics and mathematics which were very influential. The complex meanings that can be perceived from the “Cave” can be seen in the beginning with the presence of the prisoners who are chained in the darkness of the cave.

Don't use plagiarized sources. Get your custom essay on
“ Describe Plato Allegory of the Cave ”
Get custom paper
NEW! smart matching with writer

All they can see is the wall of the cave. Behind them burns a fire all the prisoners see and hear are shadows and echoes cast by objects that they do not see.

In platos allegory Plato believes the cave is the world the entire human race are prisoners of the world in the same way the cave represents the limits of their universe or knowledge The cave also represents misunderstanding and distraction, similarly Plato believes our body is a cave and inside the body is the soul ,and the soul is trapped inside the body in which humanity lost everything we required in the world of forms which was the true knowledge when we die the soul is released from our body.

The prisoners know nothing outside of the shadows at one point one of the prisoners are released he starts to see the objects of physical reality The released prisoner is a person confronted with the possibility of enlightenment who first sees the truth (the sun in the allegory) and is blinded by it. Another allegory in Platos story is The chains which hold humanity back from their own understanding these prisoners cannot move because they are restrained by chains the chains can be interpreted as a Fear of failure or  delaying something which are examples of the chains that hold back each individual from their full potential.

In the allegory these chains keep the prisoners from escaping and finding the truth that is the outside world. The chains that restrain the prisoners, while real to the prisoners in the cave, are no more real than the shadows are. Another interpretation found in the allegory the cave is very dark because there is little light inside it and objects are hardly seen, The sunlight at the end of the path, would be specifically the form of good the allegory could also be about religious enlightenment, the Sun representing the light of the good, the Godly other world which the freed prisoner has surpassed to and was now able to see.

The prisoner who was enlightened to religion is momentarily released from the ignorance and darkness of humanity the sun is a form of good, enlightened truth and the escaped prisoner who requires the knowledge and is obliged to return to the people in chains and enlighten them on what has been seen . Improve answer

In the outer world there is light and everything is clear and visible the prisoner released from the cave into the outer world slowly and gradually begins to identify everything and becomes to realise that the outer world is the real and the cave is the unreal world likewise also Knowledge, education, and spiritual enlightenment all symbolize the light. In Allegory of the Cave, light most commonly reflects revelation when prisoners, humanity, leave “the cave”. (unreal world) the darkness in the cave symbolically represents the world of ignorance

The shadows are replicas or copies of reality. The echoes represent items in life that have been distorted over time due to gossip, impressions, and rumours  These shadows or teachings where blinding the prisoner from thinking outside of what was placed in front of them equally the prisoners interpret the shadows on the wall as being real who see reflections but instead are just poor shadows of images of things that exist in the outside world for example a tree is a poor reflection of a real things that exists.

Above all Because of how we live, true reality is not obvious to most of us. However, we mistake what we see and hear for reality and truth his is the basic premise for Plato’s Allegory of the Cave, in which prisoners sit in a cave, chained down, watching images cast on the wall in front of them. They accept these views as reality and they are unable to grasp their overall situation: the cave and images are a trick a mere shadow presented to the prisoners.

Describe Plato Allegory of the Cave. (2018, Sep 26). Retrieved from http://studymoose.com/describe-plato-allegory-of-the-cave-essay 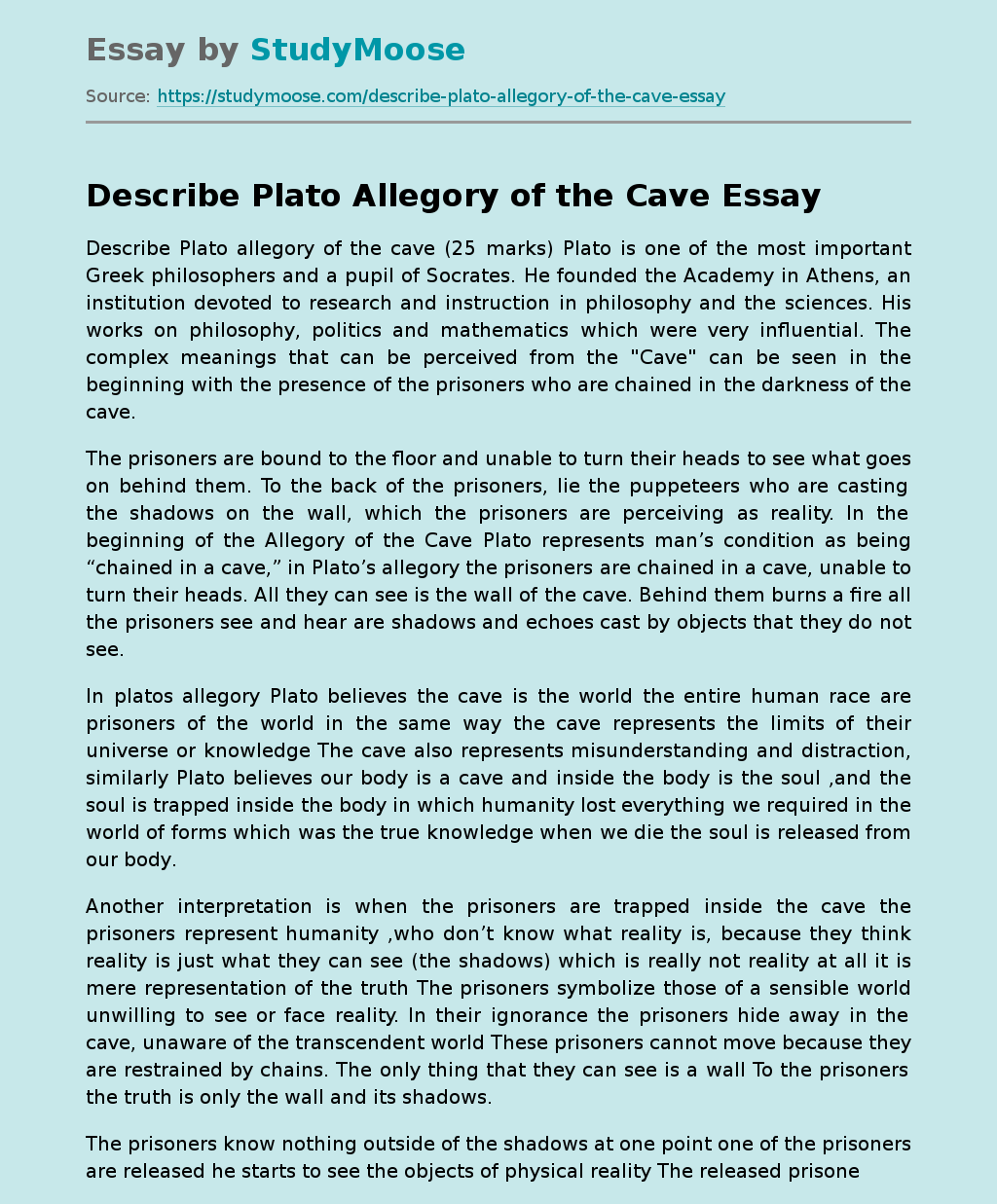