Describe a key moment in your life

An Unforgettable trip, I still remember my 3 days trip to Paris, which is one of the most fascinating cities in the world, with 20 pupils from my year and 3 teachers when I was 14.

We met at waterloo station at 7:00 am, we was all extremely excited so we wasn’t bothered about having to get up early. The train journey to Paris took around 3 hours, however it did not seem this long as I had to sit next to my friend Joe and we talked the whole way there.

Don't use plagiarized sources. Get your custom essay on
“ Describe a key moment in your life ”
Get custom paper
NEW! smart matching with writer

When arriving in Disney Land we had to walk very far to our hotel, in the burning sun, I can remember my feet was killing me as I dragged my heavy suitcase along the floor and sweat dripped down my face.

When we reached our hotel and got our room we had to unpack our bags. The hotel was like one I had never seen in my entire life before. It was like something you would see in a holly-wood film set.

The outside of the hotel was all made of deteriorated wood with a daunting and ancient look fixed to it at every angle. Just standing outside this hotel made me feel like I was a cowgirl in the Wild West. There were false saloons which looked like they had actually been built all those years ago with bullet holes shot through the wood.

As I stepped up the creaking steps and pulled back the rusty wooden door which let out a creaky scream which signaled its astonishing age I looked around on the inside, I had never seen nothing like it before.

False buffalo heads stuck on the walls, oil lamps like something you would see in the movies, but this was very much a reality, I was there. I thought the hotel couldn’t get any better, until I was told who I was sharing a room with, my three best friends.

After finally reliving ourselves of the constant nuisance of lugging the unbearable weight of our suitcases and unpacking it we finally made our much anticipated journey to the rides. Although it was only a ten minute walk it seemed like an eternity, I think this was because we were so excited to get there. As soon as we were in the theme park every single person had their mind set on what attraction they were going to be going on first, Space Mountain, a fast and furious rollercoaster, the experience was so great that we went on it over and over again. But that wasn’t enough, we also brought a souvenir photo to remind us of this unique experience.

After a long day we were exhausted but this did not stop us from partying in the square later on that night. After we eat our Mc.donalds we sat in the square where a DJ was blaring music, we began to dance in the middle. Everyone was watching us but this did not stop us, moments later the floor was packed with people dancing with us. As we went back to our place of rest at 11:30 pm, exhausted and physically and mentally drained, we all looked forward to a good nights rest but the excitement of the day overpowered our desire to go to sleep so our bodies forced us to stay up for a little while longer and I chatted away with my friends talking about the next day.

The net day we got a train into the busy city where we visited places like the Eiffel Tower and the Cathedral. We were all very amazed at the train as it had two floors and none of us had ever been on a train like that before. After all the sight seeing we went shopping, it was mostly girls who went into they city as the boys wanted to stay in the theme park, so we went into shop after shop buying souvenirs for family and friends and gifts for ourselves. That night we went for dinner in an American style cafï¿½, it reminded or being in the cafï¿½ in the film ‘Grease’, I remember a large American red car was coming out of the restaurant and a large jukebox as we walked in. We was greeted by weightier on skates, this set off the American theme even more. After that we partied again in the square and we were allowed to stay out to 12 which was enough for us as after all the dancing we could just about walk.

On our final day we visited the Disney studios where we watched many shows with all different Disney characters in it, it was fantastic, the shows were meant for younger children but we enjoyed them as much as the young children did. We also learned how Disney films were made which was very interesting.

Sadly though it was time for us to leave. Our train was meant to leave at 4:00pm so we would return at waterloo station at 7:00pm. However just before we were about to board our train the fire alarm at the station rung through our ears. I was scared, also worried as we had to leave our suitcases. As we reached the top of the escalators to exit the station I looked down and could see smoke rising, and I could start to smell it. We evacuated the station and in minutes fire engines surrounded the station.

It turned out there was a small fire on another track. We was left sitting out side the station for three hours, however it was another very hot day so we used our time by sunbathing. When we were finally allow to go back into the station we had to get a different train to our original 1 and we had to get off at a different stop to get the right train that would take us back to waterloo but the train that was meant to take us back to waterloo was also delayed. An hour later we were finally on our train home. After a long and tireless journey we arrived at waterloo station to greet our parents at 11:30. Even though all the trouble on the way home our trip to Disney Land was not spoiled.

As we got home so late we was advised to not go to school the next day so we got to lay in which was very good as we was all exhausted after our 3 day trip.

I am soon going away again with my school, to New York which will be my last trip with the school, I hope it will be as good or even better as this trip.

Describe a key moment in your life. (2020, Jun 01). Retrieved from http://studymoose.com/describe-key-moment-life-new-essay 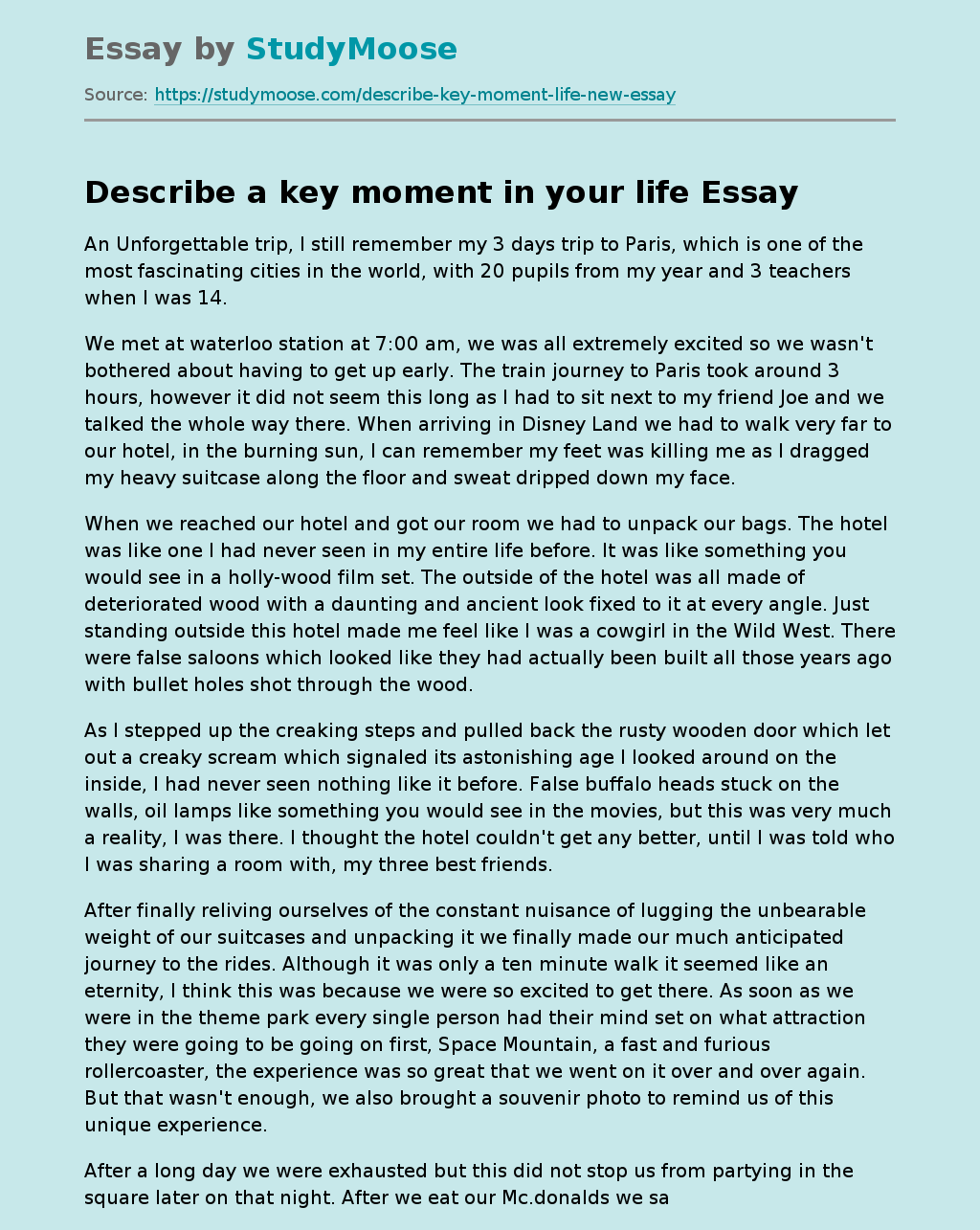