Don’t waste time
Get a verified expert to help you with Describe key aspects of public health strategies
Hire verified expert
$35.80 for a 2-page paper

Identifying the health needs of the populations

This is where trends and patterns are identified through statistics; they can be collected directly from doctors or from other secondary statistical evidence. One specific example of identifying the health needs of the populations could be looking at obesity, this means assessing the likely increase in diabetes due to obesity.

They would look at the mortality and the morbidity rates which would allow them to identify what causes the problems and put something in place to prevent it from occurring. Furthermore some organisations may collect data on communicable and non-communicable diseases, for example they may focus on a main non-communicable disease such as heart disease because there are many things which can be put in place to prevent it which would be the organisations responsibility. The world Health Organisation (WHO) would be one of the main organisations that would collect this statistical data and would make comparisons to other countries which would help them identify the problem.

Once they had identified the problem, they would put strategies in place, for example: if they were looking at heart disease they would think about campaigns which are related to lifestyle factors. Monitoring the health status of the community.

This is where organisations track the changes in health of the population and alert people to potential problems. After they have identified the changes they have made they will then be able to have a clear insight if there were any problems caused by the changes they made and how they could determine these problems. From statistics they will also be able to recognise any new patterns in health for example if a disease is increasing or decreasing. If a disease is increasing such as cancer they would put strategies in place such as screening which will identify the disease at an early stage which will decrease mortality rates on that specific disease. An organisation who would be informed on the problems would be public health agencies, personal health care organisations. Developing programmes to reduce risk and screen for early disease This helps to reduce levels of ill health by introducing new programmes that classify people as being at risk of a disease. For example, screening is put into place for cancer, especially breast cancer as it is very common and is available for most adults and is also available for men that are obese because they also have chances of getting it. Being able to identify cancer at an early stage will reduce the mortality rate because less people will be dying because the conditions won’t be as bad. It is also easier to treat at an earlier stage.

Programmes are put into place to try and reduce the levels of ill health for example, health campaigns such as change smoke free which promotes a healthier lifestyle which is benefitting the individual and preventing them for certain diseases such as lung cancer. The Department of Health is the organisation who puts screening into place to try and reduce diseases being unnoticed and making sure that they catch them early.

Promoting the health of the population

The government promote health of the population by introducing campaigns to educate people and raise awareness. This is done by educating them what health implications there are and what diseases they could get if they have a bad die,t such as diabetes or obesity, campaigns such as ‘change 4 life’ or ‘5 a day’ promote a healthier lifestyle and have the support and resources to help individuals and their specific goals and needs. They also have health campaigns to try and improve the health of the community overall and focus at deaths due to a specific illness. The main reason as to why these campaigns are put into place is to reduce the number of health problems due to obesity, drug and alcohol and smoking within communities, the government collect statistical data of how many people use these campaigns and receive the help they need to be successful and reach their goals and they look at whether this has resulted in the health of the community improving.

For example, the campaign Stoptober is run every year over October and the numbers of smokers has decreased which shows that the campaign is being successful and working effectively which has a positive outcome because these lifestyle factors reduce chances of people getting diseases such as obesity and lung cancer so therefore this comes as a benefit to the NHS because they will be spending less money. Planning and evaluating the national provision of health and social care target setting The organisations that present health and social care services will plan and evaluate what sort of health care the population needs and then they plan what provisions and care services they need to put into place and whether they need to introduce new health and social care services for people to gain access to. Usually more services are due to rising numbers, a prime example of this would be that because there is currently an increase in the elderly population, which means that there will need to be enough care homes to assist the elderly so organisations such as Health Protection Agency which aims to protect the public and they will see the increase and act on it. By making an evaluation it allows them to come up with an overall conclusion on what chances are needed and they will also look at what they are doing correctly.

Part 2- Sources of information
World Health Organisation
WHO collects their data from multiple sources using a variety of data collection methods such as household surveys and routine reporting by health services and from other sources. WHO also collects information about national and international health and can make comparisons between countries. WHO works with other countries to improve health information. They collect statistical data on infectious diseases such as Cholera, Influenza, Meningitis, Tuberculosis, Malaria, Child health and HIV/AIDS. This then allows them to see clear comparisons between countries on specific diseases and can then plan ways in which to control the disease.

Department of Health
The Department of Health aims to help people live a better and longer life they ensure that people have the support, care and treatment they need which is done by gathering statistics. They gather statistics on everything but one example they gathered statistics on surveys designed to assess the diet, nutrient intake and nutritional status of the general population aged 1.5 years and older living in private households in the UK. This then allows the government to compare diets and see if people are living a healthy lifestyle or not and help those who have not by providing resources.

PHE main objective is to protect and improve the nation’s health and to address inequalities. PHE works with local and national government, NHS and industry, to protect and improve the nation’s health and support healthier choices. The PHE look for the problems in ill health and make those changes. They make the public healthier by encouraging discussions, supporting action by local government and advising government, the NHS and others. Furthermore they support the public so they can improve and protect their own health. Mainly they help local authorities and NHS to develop the public health systems and its specialist workforce. The PHE have 36 written statistics about the health of the public, these statistics collect evidence and are
then compared against each other and they can be accessed GOV.UK.

Pressure groups- Friends of the Earth

Friends of the Earth is a pressure group who looks at protecting the wellbeing of people and the planet which has been the inspiration for most of their campaigns. By protecting the environment/planet is protecting the health of individuals too. Their first campaign was to dump 1,500 non-returnable bottles outside the Schweppes London headquarters which by recycling is better for our health. Friends of the earth helps people to see things in a different way and tries to get everyone involved by looking for the best solution, backing ideas up with facts and science.

National groups- Health Protection Agency
The Health Protection Agencies now known as Public Health England’s main role is to prevent and is preparing to meet any threat to the nation’s health. It looks at a specific risk such as radiation, poisons or chemicals and it monitors outbreaks and spread of infection. To fulfil this aim the HPA provided an approach to protect public health in the UK by providing emergency services, support and advice to the NHS and other local authorities. The HPA also had a main role in helping planning for new and rising health treats, such as bioterrorism or in the event of an emerging dangerous disease.

International groups- Who Health Organisation
WHO is a co-coordination organisation for health within the United Nations as a whole and has many roles as responsibilities such as it provides leadership on problems critical to health and appealing in partnerships where there needs to be joint action. It also shapes the research programme and stimulates the generation and dissemination of valuable knowledge. Further it puts down standards and monitors implementation. Lastly it “provides a technical support, catalysing change, and developing sustainable institutional capacity and monitoring” 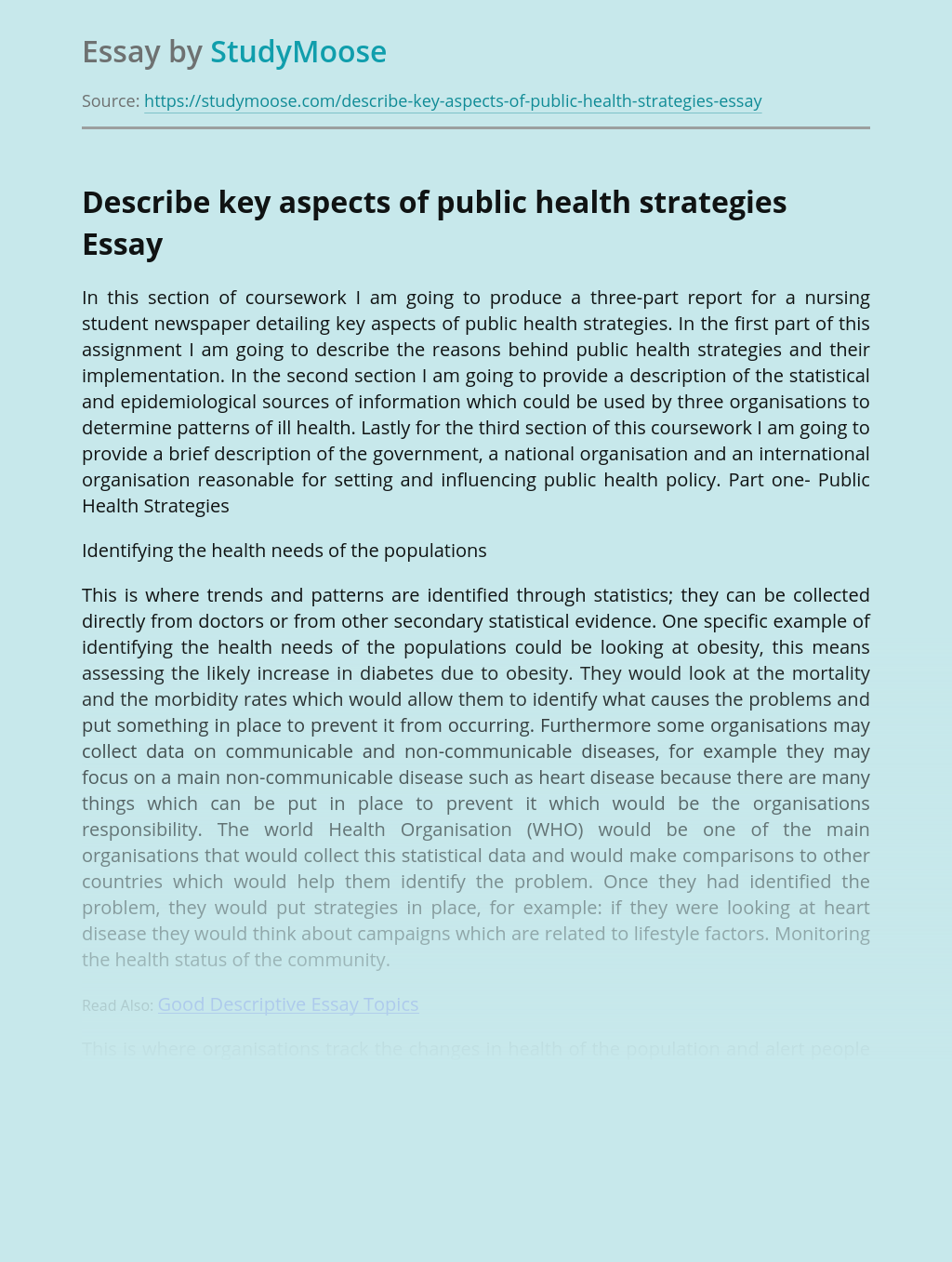