Rene Descartes and David Hume touched upon epistemology on the same question, “where does human knowledge come from? ” They both came to very different conclusions. Descartes claimed that our knowledge came from human reasoning alone and this is an absolute certainty principle. This faculty of reasoning is innate tool that came with human species. He called this tool, “mind,” which is separated from our body. Hume on the other hand, claimed that human learned from observing the empirical world, and connecting ideas using, “cause and effect.

Don't use plagiarized sources.
Get Your Custom Essay on Descartes vs Hume Just from $13,9/Page

Rene Descartes realized that many of the things that he have accepted as the truth was false opinions, and consequentially the principles that were built upon them. He wanted to start anew by try to find out “the truth”, and then build upon that, because the foundation of science requires absolute certainty. In his attempt to find “the truth,” he started to criticize all of the things he had formally believed: applying the method of doubts, and then remove from the foundation what he found to be doubtable or deducible.

He did this as he believed as his doubt increase, certainty decrease and vice versa. By the end of Meditation I, he was in a state called “Abyss,” where he was skeptical of all things and decided that the empirical world was presented to him by an evil demon He then reasoned that for him to be deceived by the demon, he must exist as something, a mind or a thinking thing After stating that his mind is the sole certain thing, he used wax to illustrate that human cannot achieve knowledge through sense, or imagination alone.

He stated that just from observing a piece of already melted wax, he would not be able to identify it as the same piece of wax he had seen earlier in its former form, if he had not been witnessing the melting process. So, sense alone is not the source of knowledge. If he then removed every qualities that a piece of wax can be without, what remain is “something extended, flexible and movable. ” From this explanation, a piece of wax could take any shapes and volume, which would not help him at all in identifying the nature of this piece of wax.

Thus, imagination alone also could not be the source of human knowledge. He concluded that the nature of a piece wax can only be perceived through the inspection of the mind (pure reason) as the other two, sense and imagination, were ruled out. Thus, knowledge is a priori, and Descartes was a Rationalist. However, how could Descartes deny sense data completely, if he had to acquire the appearance of a piece of wax or the knowledge of its nature through sense data in the first instance (before it was melted).

So he started the wax argument by contradicting himself by explaining to us what he sensed of a piece of wax. His reply was that an ordinary language almost as well led him to an error that he saw the wax (from sense data), but in the reality his faculty of mind interpreted the appearance in front of him to be a wax. Another of my objection to his argument is why creating a new thing, a faculty of mind, instate of combining what he already mentioned and known, which are sense and imagination.

In later Meditation, He also use a circular argument to prove the certainty of his reasoning and mind, as he prove God to assure that his reasoning is not fooled by the demon, but we cannot forget that he used his reason to prove God in the first place. His desperation to prove God, and separation of mind and body might be due to the fact that he wanted to serve both of his passions; science and religion. He might be bias in this sense as he doubted until he found want he wanted to seek. David Hume attempted to prove that human knowledge comes from the empirical data and experience.

He started by clearly distinguished between “impression” and “thought and idea” to illustrate that human applies our creative abilities, such as combine, transpose, enlarge and shrink, on our impression to generate thoughts and ideas. He gave two arguments for this position. The first one is human’s ideas and concepts are always complex mixture of simple ideas which are copies of the human’s sensation of the empirical world. The second argument is if a man hasn’t had any experience with a certain object, he would not have any ideas associate with that object.

He challenged oppositionists to prove him otherwise, by giving him an example of thought and idea that is built upon something that had not been seen or heard of before. However, Hume, himself, gave one example that answered to his challenge which was “a missing shade of blue. ” A man would be able to indentify that a shade of missing color from a color scale, even though he hasn’t seen that shade before. Hume stated this example is so singular, it is not worth considering.

Hume then distinguished between two object of human knowledge; relations of idea, which are thing which if were denied would be a contradiction to itself, and matter of fact which its contradiction would still be possible. Hume’s interest was on the later one as he thought the first one was merely a definition or a logical statement. He claimed that the connection between our ideas is cause and effect. For someone to believe that a person can drown in water (effect), he must had before witnessed a drowning incident or had firsthand experience (cause).

For Hume this connection cannot be known by a priori reasoning but always come from experience. Thus, this is a posteriori. However, he was convinced that cause and effect is merely a product of custom and habit. We experience it so many times that we generalize our future on our past, with no certain ground that it will continue to be like the past. This suggests that human knowledge is contingent. Hume could not come up with more certain explanation or step between cause and effect, but he convinced that it was there. Most Descartes was a rationalist.

His work shows that knowledge can only be derived from pure reasoning through innate ability or the faculty of mind, which is certain and proven in Meditation II. He separated this from the body. This leads to a belief that human is more special, as our mind has an ability to provide superior reasoning with give us knowledge. This was in line with Christian belief that men are created in God’s image, which makes us special. By adopting his view, we as a species can rest assures that we are rational being who separated from the rest.

Hume argued that our knowledge which comprised of matter of fact is based on experience, which human connect it using cause and effect. Cause and effect is merely human’s custom and habit. This makes human no more special than any other species in acquiring knowledge. He also implied that human knowledge apart from the relation of idea is contingent. If one has adopted Hume so strictly, one would abandon any knowledge that is not base on mathematic or experience such as metaphysic. Why believe or study it, if it base on something that is contingent, and cannot be proven in any sense. 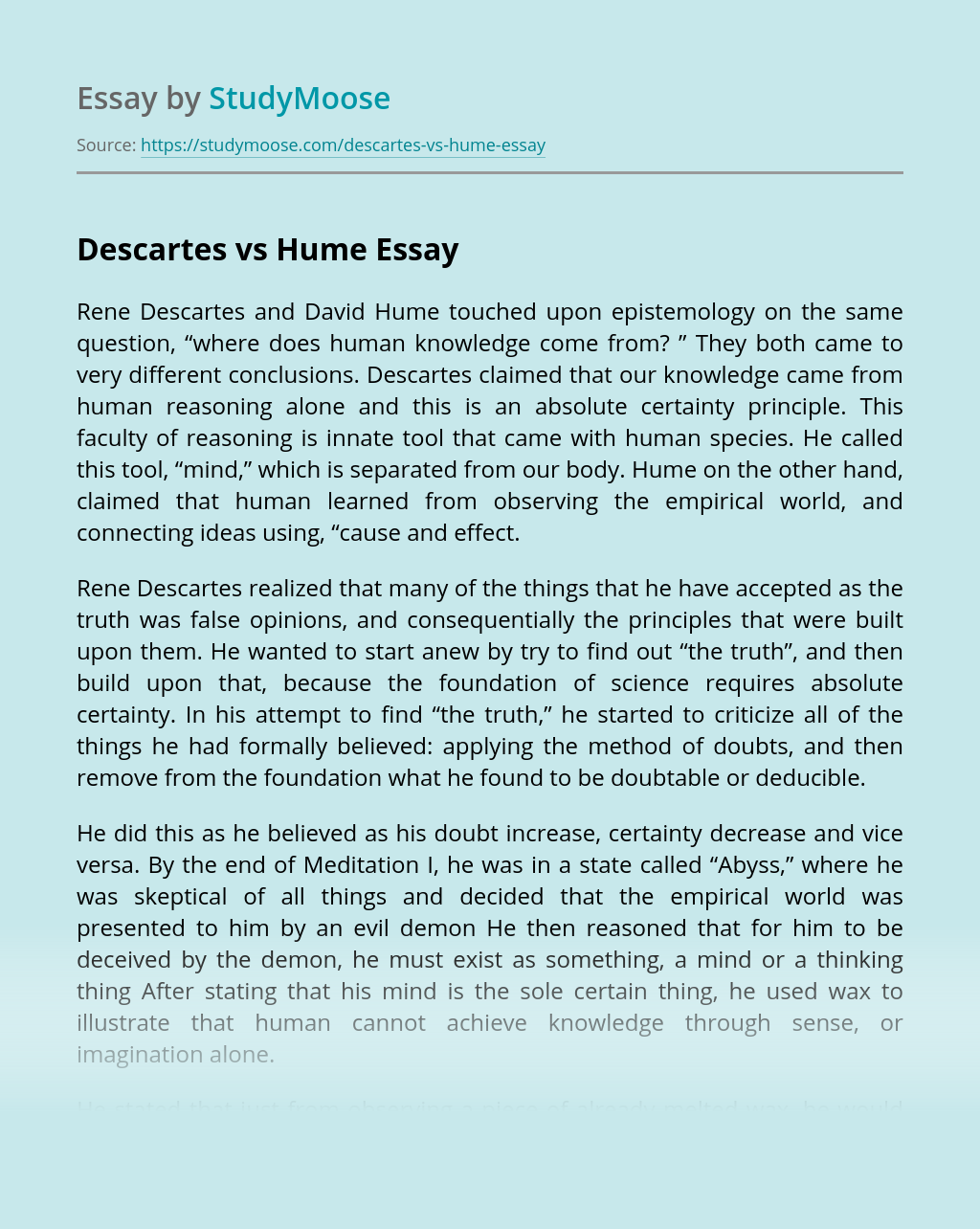