Dengue fever, a really old disease, has reemerged in the past 20 years with a broadened geographic circulation of both the viruses and the mosquito vectors, increased epidemic activity, the development of hyperendemicity (the co flow of numerous serotypes), and the development of dengue hemorrhagic fever in brand-new geographic regions. In 1998 this mosquito-borne illness is the most important tropical transmittable disease after malaria, with an estimated 100 million cases of dengue fever, 500,000 cases of dengue hemorrhagic fever, and 25,000 deaths every year.

Don't use plagiarized sources. Get your custom essay on
“ Dengue Fever Basic Points of Understanding and Prevention ”
Get custom paper
NEW! smart matching with writer

A significant challenge for public health officials in all tropical locations of the world is to develop and carry out sustainable avoidance and control programs that will reverse the trend of emergent dengue hemorrhagic fever.

Dengue Virus and the Mosquito Vector

The dengue virus is a single-stranded RNA infection belonging to the Flaviviridae family. The viral genome is roughly 11 kb in length and is surrounded by an icosahedral nucleocapsid covered by a lipid envelope. The fully grown virion has three structural (core, membrane-associated and envelope) and 7 non-structural (NS1, NS2a, NS2b, NS3, NS4a, NS4b and NS5) proteins.

The envelope protein is involved in the main biological functions and is responsible for binding and transport into host cells. It is also associated with the induction of neutralizing antibodies and development of protective immune response in the host. The non-structural proteins are expressed as both membrane-associated and secreted forms and have been implicated in the pathogenesis of severe disease. There are four serotypes classified according to their immunological properties – DEN-1, DEN-2, DEN-3 and DEN-4. Infection with one dengue serotype confers lifelong immunity against that serotype but only transient protection against infection by other serotypes. All four serotypes have been associated with outbreaks, having seen DEN-2 as the predominant serotype of primary infection during the outbreak in 2005. Recent data have also demonstrated that the various genotypes within each serotype possess varying epidemic potential. The primary vector for the dengue virus is the A. aegypti mosquito, although the virus may be transmitted by the Aedes albopictus and Aedes polynesiensis as well. Infected humans are the main carriers and amplification host of the dengue virus.

Female mosquitoes acquire the virus by biting infected humans in the viraemic phase and become infective after an extrinsic incubation period of 7–14 days. Subsequently, the mosquito may transmit the virus during every feeding. The length of the extrinsic incubation period is dependent on the ambient temperature and the virus involved, both of which affect the replication rate of the virus in the vector. Aedes aegypti is a highly domesticated mosquito that breeds in artificial containers such as water storage tanks, subterranean pits, flowerpot trays and other ornamental containers. The vector is known to prefer to rest indoor, although studies have shown that they may seek oviposition outdoors. Peak biting activity is at dawn and dusk. The multiple feeding behavior of A. aegypti and its preference for human hosts are believed to contribute to the explosive spread of dengue virus, even in the presence of a low A. aegypti population.

Laboratory diagnosis of dengue can be performed by viral isolation, serological tests, dengue antigen tests and molecular detection. Virus isolation for dengue is performed by inoculation of the sample into live mice, live mosquitoes or cell cultures. Successful detection of virus may be affected by the presence of interfering antibodies and the heat-labile nature of the virus. It is normally used as a confirmatory test, being impractical for diagnosis or screening on a large scale. Dengue-specific immunoglobulin M (IgM) and immunoglobulin G (IgG) enzyme-linked immunosorbent assay (ELISA) is widely used in diagnosis as it is relatively inexpensive, has good sensitivity and is quick and easy to perform. IgM is detectable at 3–5 days after infection, peaks at about 2 weeks and declines to undetectable levels over 2–3 months. IgG becomes elevated after 9–10 days and persists at detectable levels for life. During secondary infection, IgG increases rapidly too much higher levels within 1–2 days after infection. Because the virus shares antigenic epitopes with other flaviviruses, the presence of cross-reactive antibodies may interfere with serological diagnosis.

The dengue NS1 antigen-capture ELISA is useful for detection of dengue early in the disease. The test sensitivity has been demonstrated to be significantly higher in primary dengue infection (97·3%) than in secondary dengue infection (70·0%), with a positive predictive value of 100% and negative predictive value of 97·3%. Although it is useful in the first week of disease and provides evidence of presence of the virus, its effectiveness in screening blood donors has not been established yet. Like the NS1 test, the dengue RNA test detects viral material that is typically present in the first 5 days of disease. The advantages of the test are good sensitivity and specificity, and the ability to rapidly detect minute quantities of dengue virus material in serum. The disadvantages are the relatively high cost and expertise needed particularly proper quality control to avoid false positives.

Real-time reverse transcription–polymerase chain reaction (RT-PCR), using either a universal dengue oligonucleotide primer pair or a combination of the four serotype-specific oligonucleotide primers, is widely used for clinical diagnosis and public health surveillance. It has established detection limits of 0·1 plaque-forming units (PFU) mL−1 for DEN-1 and DEN-2, 1 PFU mL−1 for DEN-3 and 0·01 PFU mL−1 for DEN-4 and 88% correlation with virus isolation. Group-specific one-step PCR using universal dengue oligonucleotide primer pairs and SYBR green I is widely used for population surveillance as it is fast and cost-effective for mass screening, with a detection limit of 10–4·1 PFU mL−1. A prototype dengue RNA transcription-mediated amplification (TMA) assay (Gen-Probe, Inc., San Diego, CA, USA) was developed for use in large-scale screening of blood donor samples and uses target genomic sequences that are highly conserved across all four serotypes. The analytical sensitivity of the assay has been established at a detection of 14·9 copies mL−1 at 95% detection limit and 3·5 copies mL−1at 50% detection limit for DEN-1, with comparable sensitivity for all four serotypes, and with a specificity of 99·91%.

Dengue infection can produce a spectrum of clinical illness – undifferentiated fever, dengue fever (DF), DHF and dengue shock syndrome (DSS). In infants and children younger than 15 years, the patient is usually either asymptomatic or has a mild undifferentiated febrile illness with maculopapular rash.

DF is characterized by the sudden onset of high fever, severe headache (especially in the retro-orbital area), arthralgia, myalgia, nausea, vomiting and rash. Infants and younger children tend to present with an undifferentiated febrile disease, often with rash. The acute febrile illness lasts approximately 2–7 days. DHF is clinically defined by high fever, hemorrhagic manifestations, thrombocytopenia and evidence of plasma leakage (Table 1). Four grades of severity have been defined (Table 2), where grades III and IV are considered to be DSS. The presence of thrombocytopenia with concurrent haemoconcentration differentiates grades I and II DHF from DF. Clinical deterioration usually occurs towards the end of the febrile phase when the patient progresses to the phase of plasma leakage. Table1. World Health Organization case definition for DHF and DSS

The following must be present:

Hemorrhagic tendencies, evidenced by at least one of the following:

Evidence of plasma leakage because of increased vascular permeability, manifested by at least one of the following: 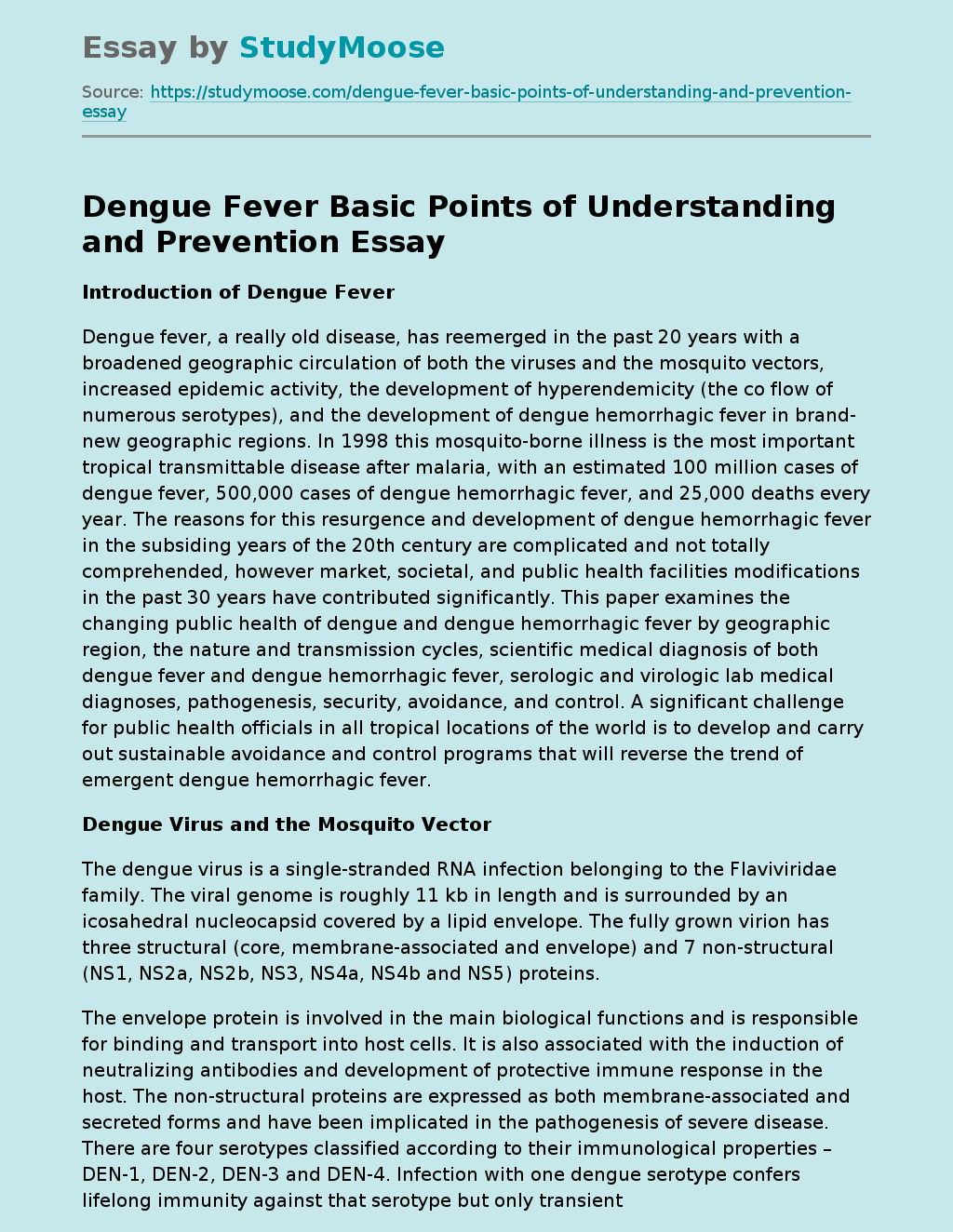