Don't use plagiarized sources.
Get Your Custom Essay on Democrats vs. Republicans Just from $13,9/Page

The biggest distinction of the two parties is that Republicans are known as conservatives and the Democrats are known as the liberals (Democrat vs. Republican). All though they have some views and policies Democrats and Republicans both agree on, there are many differences that distinguish the two political parties such as taxes, government spending, social programs and issues.

It rose to prominence with the election of Abraham Lincoln, the first Republican president. The party presided over the American Civil War and Reconstruction and was harried by internal factions and scandals towards the end of the 19th century (Diamond & Gunther, 5). Today, the Republican Party supports a pro-business platform, with further foundations in economic libertarianism and a brand of social conservatism increasingly based on the viewpoints of the Religious Right (“Our Party”).

Since the division of the Republican Party in the election of 1912, the Democratic Party has consistently positioned itself to the left of the Republican Party in economic as well as social matters (Han & Han, 32). The economically left-leaning activist philosophy of Franklin D. Roosevelt, which has strongly influenced American liberalism, has shaped much of the party’s economic agenda since 1932 (Han & Han, 30). Roosevelt’s New Deal coalition usually controlled the national government until 1964 (Han & Han, 30).

Republicans believe that each person is responsible for his or her own place in society (“Republican National Committee| GOP”). Government should enable each person the ability to secure the benefits of society for themselves, their families and for those who are unable to care for themselves. The Republican philosophy is based on limiting the intervention of government as a catalyst of individual prosperity (“Democrats vs. Republicans”). Government should only intervene in specific cases where society cannot effectively act at the individual level. With the core belief that individual destiny should be in the individual’s hands, governmental power and resources should be kept close to the people, through their state and community leaders, and not centralized in distant federal government agencies (Diamond & Gunther, 7).

Democrats believe it is the responsibility of government to care for all individuals, even if it means giving up some individual rights and/or subordinating enterprise and initiative (“Democrats & Republicans”). Democrat Party administrations have pushed for the centralization of power in Washington D.C., with only secondary consideration for the rights of both individuals and communities. Democrats have favored federal-level interventions that replace community-based solutions to community problems. These tactics have created several federal regulations and controls that are often in the hands of unelected bureaucrats, causing a severe erosion of local authority.

That is why Democrats will always vigorously oppose the type of tax reform supported by Mitt Romney, which independent experts have found would require raising taxes on typical families with children by at least $2,000 if it were paid for (“Mitt Romney on Tax Reform”). At the same time, Mitt Romney’s plan would cut taxes for those making over $3 million by an average of $250,000 and would create incentives that will lead to hundreds of thousands of jobs going overseas at the expense of American workers. Democrats support cutting taxes for middle class Americans (Barton). Today, for most families, the federal tax burden is the lowest it has been in twenty years (Barton).

Republican views on taxes include the belief that tax reduction is important, but must be done the right way (“Republican National Committee | GOP”). The party believes that budget surpluses have caused Americans to be overtaxed-a condition that is not only threatening their financial prosperity, but is also hindering, and possibly even reversing, growth to the country’s economy (“Democrats vs Republican”). They also want to limit the top marginal rate, believing it punishes those who have worked hard and invested well.

Republicans also wish to make the Research and Development tax credit permanent (Barton). These three tax reforms combined, Republicans believe, will encourage and promote entrepreneurship (“Republican National Committee”). They also believe in encouraging saving and investments by implementing a tax credit for investments. However, despite their support for lowering taxes, Republicans do believe that tax cuts or tax incentives without any balancing spending cuts are detrimental to the economy (Barton).

Republicans believe Americans deserve to keep more of their own money to save and invest for the future, and low tax policies help drive a strong and healthy economy (“Republican National Committee | GOP”). Tax relief is the Republican route to growing the economy (Barton). A Republican government would reduce taxes for businesses to allow businesses to grow and thus hire more employees (Barton). Republicans also seek to limit income taxes for individuals so that people can hold on to more disposable income, which they can then spend, save or invest (Barton).

Like the Republicans, Democrats believe the government should subsidize vital services that keep cities, states and the country running: infrastructure such as road and bridge maintenance and repairs for schools (Barton). Democrats also call for tax cuts for the middle class. But who benefits most under each platform? The conventional wisdom is that corporations and the wealthy will benefit more with a Republican tax policy while small businesses and middle-class households will benefit from a Democratic tax policy (“Our Party”).

The next topic is about social issues such as abortion and same-sex marriages. Democrats are generally for abortion (Our Party). The party strongly and unequivocally supports Roe v. Wade and the investment in stem cell and other medical research. They want to pursue embryonic stem cell research. Democrats support right to choose even if mother cannot pay. They strongly believe that choice is a fundamental and constitutional right. Democrats support the right of all families to have equal respect, responsibilities, and protections under the law. The party supports marriage equality and support the movement to secure equal treatment under law for same-sex couples. They also support the freedom of churches and religious entities to decide how to administer marriage as a religious sacrament without government interference.

The Democratic Party opposes discriminatory federal and state constitutional amendments and other attempts to deny equal protection of the laws to committed same-sex couples who seek the same respect and responsibilities as other married couples.

Republicans promote adoption & abstinence, not abortion clinic referrals. They ban abortion with Constitutional amendment and suggest alternatives like adoption, instead of punitive action. The Republican Party platform is clear. Republicans believe marriage is the legal union of one man and one woman (“Republican National Committee | GOP”). Americans want to see changes in our tax code, changes in our schools, and changes in our health care system, but there is no public clamor to change the definition of marriage as being between one man and one woman. In fact, polls consistently show that 2 out of every 3 Americans oppose recognizing same-sex marriage.

Both political parties have a lot of different opinions. It is up to the voter to decide which party they feel has similar beliefs. Democrats and Republicans have very strong beliefs and only some now a days try to follow the ways for when the original parties were in session. In conclusion, the difference between a liberal and a conservative can no longer be defined within the constraints of the Constitution of the United States. In America today, the answer to this question can only be answered in view of our nation’s socialist political structure. A liberal is defined as a liberal socialist and a conservative is defined as a conservative socialist. 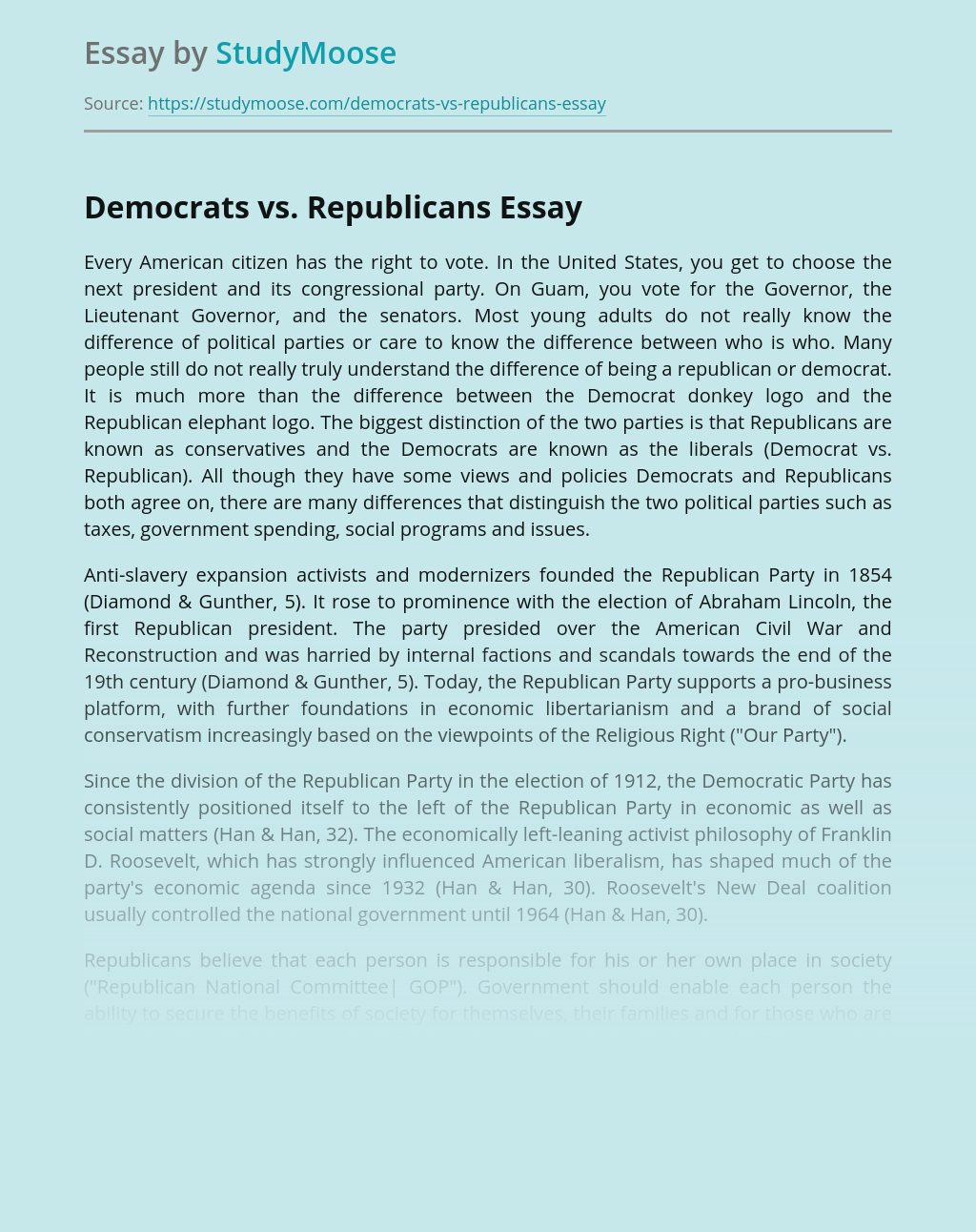 Classical Athens and Han China were different due to their forms of government, the relationship between the individual and the state, their views on man and nature and their background information. Within the background information of both Athens and Han China there are very evident differences between the two. The first document shows the maps...

View sample
Get Essay
Napoleon And The Enlightenment

The enlightenment was a time of great learning throughout Europe during the eighteenth century. Although the period is significant for scientific and other scholastic advancements, it is most important because it allowed for the opening of great minds–such as that of Napoleon Bonaparte. Shortly after this enlightenment made its way through Europe, revolution and civil...

Democracy is the worst form of government except all those other forms that have been tried from time to time Introduction             Even though the concept of democracy form of governance has long been in existence for centuries, it was the emergence of country state government system which gave birth to the rise and flourish...