There are basically two types of government, Democracy and Dictatorship. Democracy is a majority ruled government. The origin democracy government formed in 400 B.C. in Athens. There are three kinds: Direct democracy where people directly vote in decision; indirect democracy where people elect representative to make decisions, such as our Congress; and Elite democracy where the rich make decision. A dictatorship is government ruled by the few over the many. There are different kinds, such as Communism which meet basic needs of all people; Monarchy where ruled by birth right; Oligarchy where ruled by the few military; and Fascism which is the system of government in Italy.

These two types of government are totally opposite of each other and they both have their advantages and disadvantages.

In a democracy, people are free and they have their human right. Such as in the United States, we have the bill of right, the first ten amendments. We have freedom to speech; have the right to vote for our government.

We also have written rule to limit our government that no one is above the law. Therefore everybody have equal opportunity to success. Moreover, democracy trend to have peaceful power transaction, such as our President we voted for it every four years. However, there are also disadvantages in democracy. Discussion making is slow in democracy since it has to be voted on and pass through many steps. It also has weaker military during peacetime. In addition, since people have more freedom and the government not strict as dictatorship, it usually has higher crime rate and has a wider disparity between rich and poor.

In dictatorship, government got their power from the military, therefore they have a stronger military and have lower crime rate. Moreover, since the government has the power to make decision, it has quicker act on decision-making. Dictatorship government potential to provide for the basic standard of living for everybody, but only China and Cube does a good job. The weakness for dictatorship is people have no personal freedom. The government makes all the rules and they can change it as they want anytime. Beside the basic need, government not responsive for other people. And because of the strong control government, a lot of corrupt going on, people have neither opportunity nor fair justice. And when time comes to change of government, it tends to be violent and bloody because they will never give up their power in the government, therefore it will come to revolution.

Democracy and dictatorship both have their advantages and disadvantages. We still can find these two types of government throughout the world. Even though nowadays, many countries worldwide are more trends towards to the democracy such as country in Latin America and Earthen Europe. Weather you like it or not, are your choice if you want your freedom in democracy or if you want much easier to be a subject in dictatorship. 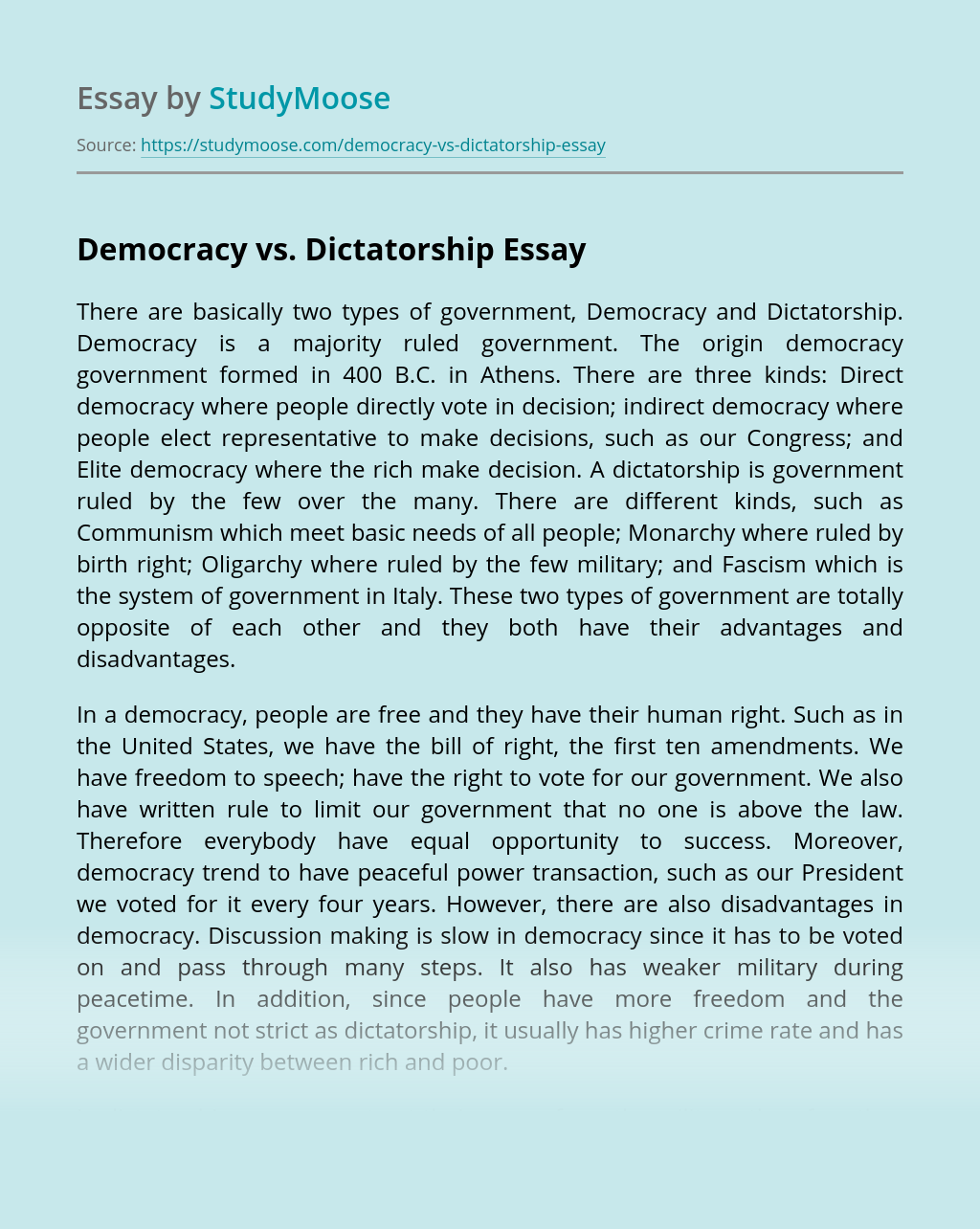 Don’t waste time
Get a verified writer to help you with Democracy vs. Dictatorship
Hire verified writer
$35.80 for a 2-page paper
Stay Safe, Stay Original