” You are a half-blood. One of thy parents was mortal. The other was an Olympian. “

-Zo? Nightshade on demigods, talking to Nico di Angelo, in The Titan’s Curse

Demigods, or half-bloods, are a race of beings who are half-mortal, half-god. They possess mortal souls and are vulnerable to old age and death; however, their godly blood endows them with special abilities that allow them to achieve feats usually not possible by humans.

Don't use plagiarized sources. Get your custom essay on
“ Demigods: Half-Mortal and Half-God ”
Get custom paper
NEW! smart matching with writer

Demigods are the end result of a god and a mortal (mostly with human) having a child together. Because these children are part god, they have above average reflexes, an affinity for the Greek or Latin language, and may have some level of control or skill over the realm of their godly parent. Most of them also have ADHD and dyslexia to help them learn Latin and ancient Greek and to help them concentrate in battle (though some possess one of these abilities only while others possess none).

While most demigods are created much like regular humans, children of Athena are born from their mother’s thoughts merging with their father’s. In this way, Athena remains a virgin goddess and it reflects how she herself was born, sprouting from the head of Zeus. It is unknown if other virgin goddesses or gods in general have a special way to have children like Athena.

When a demigod reaches a certain age, normally early teens, their powers start to manifest.

At this time, demigods will release a scent that monsters are able to detect. This scent will become stronger if the child learns they are a demigod. Also, if the demigod is a child of a powerful god, the scent can become even stronger. If the child never learns that they are a demigod or they are a child of a minor god, monsters may overlook them. It is around this time that they are escorted to Camp Half-Blood usually by satyrs, where they are placed in one of the cabins, each honoring a different god or goddess.

Most demigods wait to be claimed. Children of Athena are claimed at birth, while others have to demonstrate some form of their parents’ trait to be noticed, either through cunning, powers, skills like archery, or even beauty. Otherwise, they are placed in Hermes’ cabin, as he is the patron to travelers, anyone is welcomed there, including children of minor gods who aren’t important enough to have a cabin. After the Second Olympian War, Percy Jackson made all of the gods swear on the River Styx to recognize all of their children at the age of thirteen, and that each god and goddess (including the minor gods and goddesses) would get a cabin at Camp Half-Blood.

Few demigods have full-blooded siblings (with the exception of twins), as their godly parent will usually leave their mortal consorts not long after a child is born, or sometimes even before that. However, some examples of demigod siblings in the series include Nico and Bianca di Angelo, Connor and Travis Stoll, Jason and Thalia Grace (who have the same father, but in different aspects).

Greek demigods often go on quests given to them by the Oracle of Delphi, whom is currently in the body of Rachel Elizabeth Dare. Roman demigods are usually issued a quest by an augur or, in at least one instance, a Roman god.

Demigods are completely indistinguishable from humans. They do not have a divine form, however they do inherit some traits from their god parent’s divine form. For example, Percy inherited Poseidon’s black hair, sea-green eyes and brooding look, while Annabeth Chase inherited Athena’s startling grey eyes. Thalia and Jason Grace inherited Zeus’ electric blue eyes and regal features (Thalia in special inherited Zeus’ black hair) and Nico and Bianca di Angelo inherited Hades’ dark hair, dark eyes, and pale skin. The children of Aphrodite inherit her beauty and appeal. The children of Hermes inherit his elfish facial features and Luke inherited his blue eyes. Children of Ares inherit his sneer and tall, bulky appearance. Children of Hephaestus, such as Leo Valdez, Jake Mason, Harley, Nyssa, and Beckendorf inherit his skills with mechanics, resulting in them normally having large muscles and calloused hands (from working in the forges all day long). They also inherit his ugliness, or in Leo Valdez’s case, his curly dark hair. Children of Apollo inherit his healing powers and archery prowess. Some, like Will Solace, inherit his blond hair and blue eyes. Magnus inherited Frey’s long blonde hair and Alex Fierro got his/her sly smile from Loki. According to The Crown of Ptolemy, when an Egyptian god looks at a Greek demigod, they see them as a human surrounded by “a powerful ultraviolet aura.”

It is unknown whether a demigod’s eye and hair color depends on what form their parent took while consorting with their mortal parents. Some demigods with the same divine parent have a different color.

There are ways to hide or mask the scent, but if a demigod realizes who they truly are, their scent will reach its peak. The scent of children of the Big Three is much more potent than that of the children of lesser gods. Demigods’ personalities tend to vary based on their divine parenthood; for example Percy is reckless and rebellious resembling Poseidon and the untamed seas, Annabeth inherits her mother’s wits and intelligence, Clarisse is very violent and warlike, much like her father, Jason and Thalia are strict and mature like their father, Zeus/Jupiter, Leo is crafty and creative, and understands machines more than people, like his dad, Hephaestus, Nico is very dark and moody like his dad and enjoys spending time with the dead more than the living like his father Hades, and Connor and Travis Stoll are mischievous and cunning and like to play pranks and steal things, like their dad, Hermes. There are currently four known children of the Big Three since the death of Bianca di Angelo, a daughter of Hades and Jason Grace, a son of Jupiter: Percy Jackson (son of Poseidon), Thalia Grace (daughter of Zeus), Nico di Angelo (son of Hades), and Hazel Levesque (daughter of Pluto). Most demigods also have ADHD and/or dyslexia (though it varies from demigod to demigod). Demigods are relatively (or extremely in some cases) stronger, more agile, and more durable than regular mortals, and have more resistance to diseases.

Demigods have a distinct scent due to a spell cast by Lamia, a monstrous daughter of Hecate, which allows monsters to find them. It is also extremely dangerous for a demigod to use a cellphone, as Monsters are attracted to demigod voices traveling through the air. Many demigods indirectly change the course of history, and demigod conflicts usually mirror conflicts in the real world; such as how when the Roman and Greek camps fought each other during the events of the American Civil War. Some powerful demigods can directly change some of the courses of history and can manipulate the minds of mortals in some events, using the the Mist to change what mortals see. Currently, Hazel Levesque, Thalia Grace, Percy Jackson, and the children of Hecate have this ability.

According to The Crown of Ptolemy, when an Egyptian god looks at a Greek demigod, they see them as a human surrounded by “a powerful ultraviolet aura.” Demigods also have the ability to act as a host for an Egyptian god for at least a short period of time despite not being Blood of the Pharaohs, a requirement for Egyptian magicians to safely channel the power of a god and host one.

Greek demigods, such as Percy Jackson, are a subset of demigods who train at Camp Half-Blood, located in Long Island. They are born when a god conceives a child with a mortal while in their Greek aspect. As such, Greek demigods have an innate predisposition towards ancient Greek, and possess instinctive battle skills that manifests as ADHD.

They are assigned to a cabin dedicated to their divine parent once they are claimed. Most Greek demigods die in their teens because they are prone to being attacked and killed by monsters either before making it safely to Camp Half-Blood or during quests. 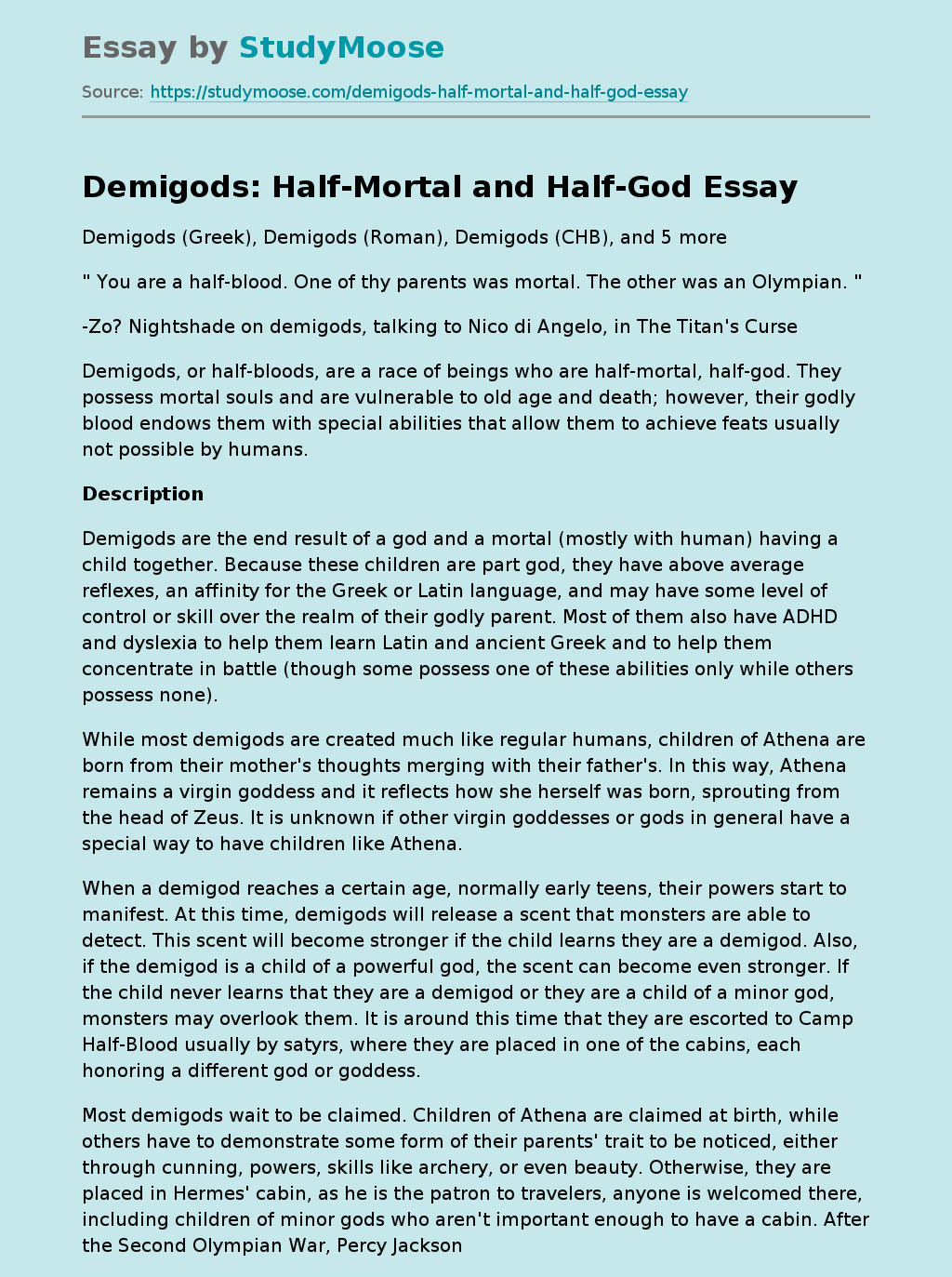