Dementia is a term used to describe the symptoms that occur when the brain is affected by specific diseases and conditions. Dementia is a syndrome do to disease of the brain, usually of a chronic progression nature in which there are multiple disturbances of higher cognitive function. Symptoms of dementia include loss of memory, confusion and problems with speech and understanding.

The key function of the brain affected by dementia are: impairment of memory thinking, and orientation, learning abilities, language and jugement.

The resulting disability depends on the interaction between the underlying disease process, the individual and the social environment.

Dementia often is developing slowly and is not always obvious in the early stages. There are symptoms similar to dementia seen in other illnesses and sometimes it can be difficult to tell apart dementia from the usual forgetfulness seen in normal ageing.

Also there are many other reason why people become forgetful, depressed, anxious, mood changing. Symptoms can be related to some medicines and drugs, vitamin deficiency, thyroid problems.

Medical model relates to clinical approach, how the changes occur within the brain, managing the condition with medication, etc Dementia as a clinical syndrome is characterised by global cognitive impairment, which represents a decline from previous level of functioning, and is associated with impairment in functional abilities and, in many cases, behavioural and psychiatric disturbances.

Dementia is not a normal part of the aging process; it is a disease of the brain that leads to disability of cognitive function, behavioural or motor deficits. People with dementia are not able to live alone, they are a risk for them and for others; they need continuing supervision, carers who are trained to meet their needs. Dementia is progressive, which means the symptoms will gradually get worse.

Dementia it is a big umbrella term used to cover different conditions that cause dementia. There are many different types of dementia, the most common are Alzheimer’s disease, Vascular Dementia, Lewy body dementia, Alcohol related dementia, Front temporal dementia. All types of dementia are characterized by abnormal neurodegeneration, which is brain cells dying daily. This leads to cognitive, behavioural or motor deficits. One of the ways to categorized dementia is by where the damage to these cells is occurring in the brain.

Alzheimer’s disease cause loss of brain cells, neurons, cause by what are called plagues and tangles in the brain. Plagues comprise of protein, known as amyloid which attach themselves to cells in the brain and ultimately destroys them. Tangles are bundles of abnormal fibres which consist in protein called tau.Alzheimer disease can be seen throughout the brain but is particularly noticeable in the temporal and parietal lobes. It also changes in the brain neurotransmitter system, the chemical messages which allow communication between brain cells breaks down. Vascular Dementia usually is due to a thrombosis, a cloth forming in a vessel which then leads to areas of brain cell death.

Lewy body dementia. People with this type of dementia have brain plagues like someone with Alzheimer’s but have fewer tangles and instead have Lewy bodies which are pink staining structures found in neurones brain cells. Front temporal dementia is a degeneration of frontal and temporal lobes of the brain parts there are controlling the behaviour, emotional responses ore language skills. It is a rare form of dementia affecting younger people under the age of 65. Alcohol related dementia caused by atrophy of the brain associated with alcohol consuming.

The main factor is old age; over 80 years old it is more likely to develop dementia. The risk factors can be: Unhealthy diet (excess of fat, animal protein, high processed food), obesity, smoking, misuse of alcohol, high blood pressure, lack of exercise, cardio- vascular diseases, and genetic background. A healthy lifestyle may reduce the risk of developing the disease. 10. Identify prevalence rates for different types of dementia Both man and woman get dementia. Dementia affects mainly older people but it can affect younger people. In UK there are about 750.000 people with dementia and 18.500 people under age of 65.

Over 17.000 people got Alzheimer; it represents 40-50% of people with dementia. About 10% of people with dementia are known as mixed dementia. Vascular dementia, the second cause after Alzheimer affects about 20% of all dementia. Lewy bodies’ dementia affects about 19% of all dementia and it is believed to increase. Fronto-temporal dementia is one of the rarer types, affecting men and women under 65. It is the second cause for dementia in younger people (under 65) and is the third most common cause for this group of age. Korsakoff syndrome is diagnosed in about one in eight people with alcoholism. Present in about 2% of general population, it is affecting mainly man between 45 and 65 Parkinson dementia represents around 2% of all causes of dementia in the UK.

Depending of the type of dementia, age, personality, environmental, individuals can experience different challenges despite of the pattern of the disease

In earlier stage a person with dementia can appear more apathetic, louse inters on activities, not interested to try new things, be unable to adapted to changes, poor judgements, blame others to steal things, became more forgetful to recent events ,be more irritable if they fail on something, have difficulty handling money. In this stage the symptoms are not so evident and can be easily related to old age or tiredness.

In moderate stage the symptoms are more evident and disabling. A person became more forgetful, confuse about space and time, lost if it is an unfamiliar surroundings, forget familiar names or confuse one family member to other, wonder around on streets having disturbing nights, behave inappropriate, seeing or hearing things there are not there, become very repetitive, neglected on hygiene or eating, become angry, upset or distressed through frustration. In these cases a person is not able to live alone, will need supervision and assistance becoming a risk for him/her and others.

Severe dementia, the person became severely disable and need total care and supervision. Memory is very poor, they can’t remember things even for a minute, louse the ability to understand or speech, became totally incontinent, did not recognise friends or family, need assistance in all ADL’s, being very disturbed at night, restless and aggressive, having difficulty walking, having uncontrolled movements, in time immobility will became permanent.

Most people with dementia suffer some memory loss. Depend of the type of dementia, level of their disability, background, there can be some difference. For example in Alzheimer’s disease difficulty in functioning are regular, in Vascular dementia they may have patchy in what they can and cannot do or have some damage in specific areas or functioning and none in others. In Lewy Body dementia, people will have fluctuation in their cognitive state, memory functions tend to be better preserved. They can also have more prominent visual and auditory hallucinations, paranoid and depression may be common. In Front temporal dementia, in early stages the memory remains intact but the personality and behaviour will change. They can behave inappropriately, lose inhibition, language problems.

Some abilities remain; even many are lost as the disease progress. The person still keeps their senses of touch and hearing and their ability to respond to emotion. A person with dementia may not be able to communicate their wishes and needs; they may not be able to tell if they are in pain; because of this they will use their behaviour to communicate. The behaviour of a person with dementia is a big challenge for carers. It will not always be clear what the person is trying to tell, it is up to the carer to try and find out what the person needs. Because a person with dementia is forgetful, confuse, became frighten not knowing where he/she is, not recognise the people, surroundings, he/she can show challenging behaviour. They can become aggressive, they can hurt themselves or others, shouting, wondering and usually trying to go out. Their personality can change and it is frustrating for family who know their beloved, a nice, calm person can become totally different.

Although some symptoms are common to many people with dementia, each person’s experience with the disease will be different. Dementia it is a disability; a person with dementia will need someone to be with them all the time to meet their needs, to protect them for becoming a risk for them and others.

Because behaviour, in my opinion, is the most challenging when caring for a person with dementia, carer has to be well informed about their client. Attitudes and behaviour of others may have a big impact in evolution of the disease. The behaviours shown by people with dementia happen for a reason The person with dementia’s behaviour may be related to something in their past life, a job or a role such as being mother or father. They may be trying to tell you that they are lonely and miss their family. Or they could be telling you that they want to feel useful.

Provided person centred care is of the outmost importance, therefore is essential to have prior knowledge of the client’s past for example hobbies, family structure. A well structured plan of care for staff to follow is essential, to treat the client as a human being is crucial and not as someone with dementia. Many people with dementia have a fragile sense of self-worth; it’s especially important that people continue to treat them with courtesy, however advanced their dementia. A surrounding can influence person behaviour; a person with dementia can show bad behaviour just because he is trying to tell you something about their environment. It can be a noisy room, a cold room, they does not know where they are.

The client with dementia should be safeguarded and protected from the conflictual situation, noisy environment, pain or unpleasant experiences which may trigger a challenging behaviour. The attitude of the people around, the way they speak or behave may influence the mood of someone with dementia. It is best to stay calm, provide reassurance and distract the person attention to something pleasant for him. The carers and family must understand that the person’s behaviour is not something he can control, or something he means it.

Understanding, tolerance, encouragement and kindness while preserving the dignity of the person is the best way to cope while carrying for a client with dementia. It’s very important that people with dementia are treated with respect, to remember that a person with dementia is a unique and valuable human being, despite their illness. 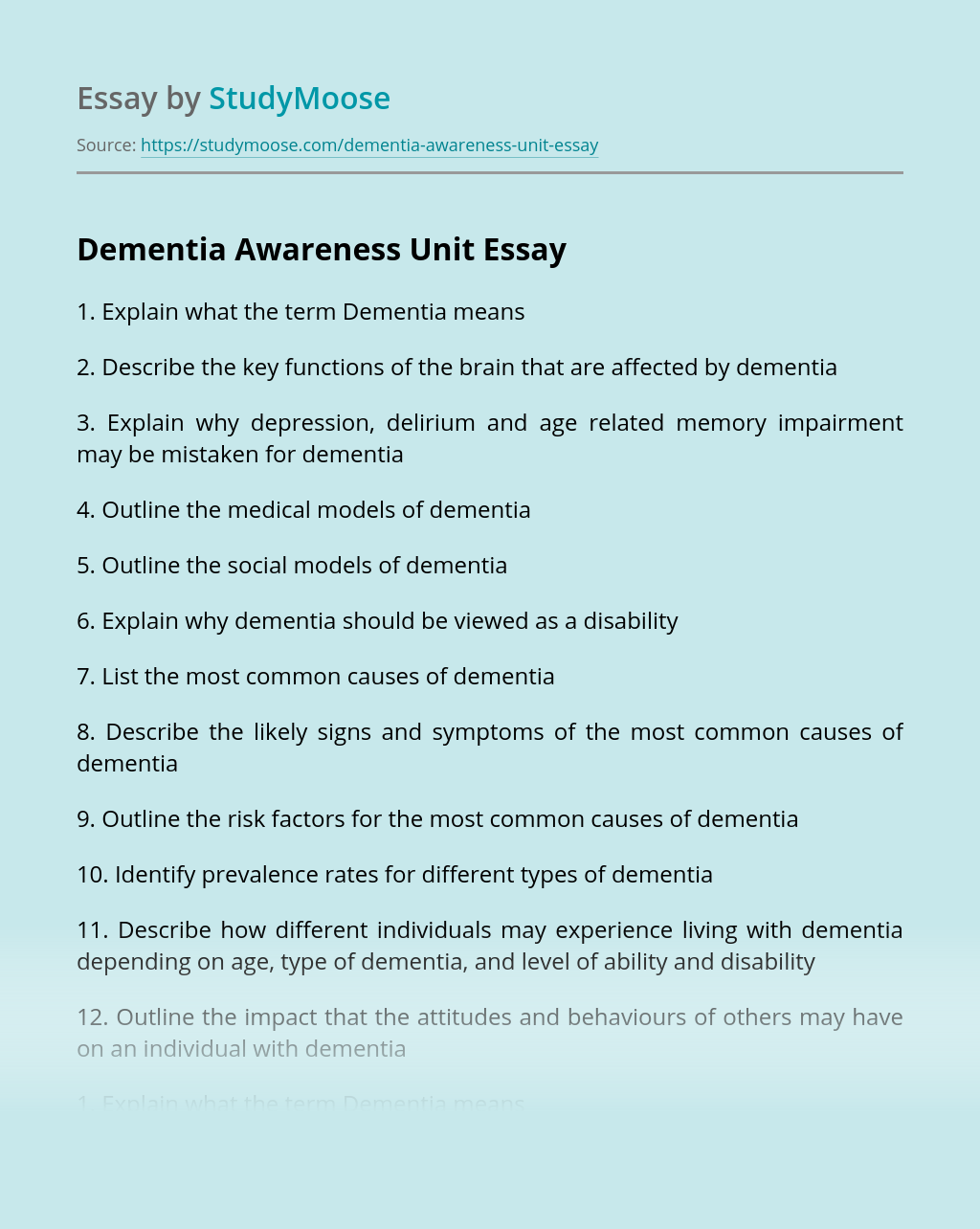