The PC industry can be analyzed using Porter’s Five Forces. The first force is threat or barriers of entry. Here, the threat is high and barriers are low. Although certain brands own the majority of the market, the costs to manufacture are extremely low, and the prices of these components are declining yearly at 25% to 30%. The capital required is relatively inexpensive, as well. Also, unbranded “white box” PC makers have become prevalent overseas; showing anyone who can make a PC could make sales.

In Buying Power, consumers have great power. There are a high number of users but consumers have a wide variety of brands to choose from and have put much pressure on companies to make satisfactory products at good prices. Customers also have low switching costs. This force along with high demand was also partly responsible for the “vigorous price war” as many companies cut prices to match one another and satisfy consumers.

Intel and Microsoft ran near-monopolies in supplying microprocessors and operating systems, respectively. By 1998, 96% of all PC’s ran on “Wintel.” These two suppliers drew profits from all PC companies and minimized differentiation, as there were few substitutes and little options of switching to another supplier. The industry’s degree of rivalry reflected its fierce competition. As computers became more common, demand rose, prices decreased, and demand grew stronger, boosting competition between manufacturers. This rivalry is essentially what sparked Dell’s competitors to try to emulate their business model and attempt to gain a competitive advantage for the future.

Lastly, the threat of substitutes was low but growing. Consumers were becoming reliant on PC’s as they became commodities but new technologies such as laptops, PDA’s, and smartphones among others were slowly emerging.

Although Dell sold to a diverse range of customer segments, they generally targeted the “educated consumer,” people knowledgeable about computers. Dell targeted them and wanted to avoid the “inexperienced Transaction buyer.” Because Dell sold customized PC’s directly to the customer, they needed to know each computer’s specifications, thus making it difficult for inexperienced users to specify their needs. Dell’s close location to its suppliers served as a large advantage. Dell arranged for suppliers to locate their production facilities close to Dell’s to maximize the efficiency of operations. This allowed Dell and suppliers to work closely with one another, integrating the organization and minimizing buffers. Dell’s unique production process is the part of the model that may deter most imitators. Dell had the advantage of handling fast and large orders and even having suppliers send shipments straight to customers in some cases.

Dell’s success with the Direct Model led to rankings among the top of its competition in user ratings (Exhibit A), a ranking first in ratings for high-end PC’s, and allowed them to obtain the second and third spots for market share in the US and world, respectively. The financial statements that best measure Dell’s advantage are their inventory level ratios. Specifically, Dell’s days of inventory is significantly lower than competitors. Their low days of inventory ratio correlates to a very high return on invested capital and return on equity. Comparisons with competitors can be seen in the appendix (Exhibit B).

Dell’s success in financial returns and rapid growth has caused rivals to try to emulate their Direct Model in attempt to gain a competitive advantage and similar success. What is difficult to emulate in Dell’s model and how can they keep itself in this position and leverage sustained growth for the future using this model?

Dell is the originator of the direct model and knows the formula for success. Dell’s integrated production process with suppliers on a global scale, sole focus on distributing directly to customers, ability to effectively serve a diverse customer base, and ability to provide high quality PC’s at relatively low prices, has put them in a strong position ahead of competitors. Dell knows their capabilities, their customers, and knows exactly to focus on direct distribution. IBM ranks alongside Dell in domestic and worldwide market share. As the first to recognize Dell’s threat of distribution, they took initiative immediately, responding with a joint operation with distributors and resellers called AAP. Many major distributors and resellers each invested tens of millions of dollars into this program, which could result in powerful partnerships if successful. Compaq owned the largest market share in the industry for some time and are reliable to a number of segments.

They also responded with their own model, ODM, which is also in conjunction with distributors and resellers similar to IBM’s, and DirectPlus, selling directly to small and midsize companies. The company also recently acquired DEC, in which they would leverage their relationships to sell directly to DEC customers and accounts. HP created their own direct model with ESPP. Although their model was similar to IBM and Compaq’s involving distributors and resellers, they specifically aimed to please these partners. HP offered incentives and would make resellers and distributors a larger part of the process. In result, 59% of resellers reported they were more willing to promote HP products than IBM and Compaq. Gateway may have been Dell’s largest threat as the world’s second largest direct seller behind Dell. They even briefly surpassed Dell in sales in 1994 and their days of inventory was at 10 days, only 3 behind Dell’s 7 in 1998. Gateway served mostly personal users but began serving large corporate accounts with Gateway Major Accounts, Inc. in 1997. But in 1998, the company scaled this operation back as they could not afford to keep it up.

Dell’s Direct Model had a competitive advantage rivals could not easily emulate through their relationship with large enterprise customers and their unique production process that involves a close relationship and location with suppliers.

Dell is in a strong competitive position against its rivals because of the criteria of advantages in their model. Dell’s production process and close location and collaboration with suppliers on a global scale is a standard that is very difficult to emulate. IBM, Compaq, and HP tried their own versions of direct distribution models but failed to produce anywhere near the same efficiency with financial returns as Dell (Exhibit B). Also, these companies attempted to branch into Dell’s lane while continuing retail sales, which showed it is difficult to focus on both methods and see the same success. Gateway was arguably their biggest threat but could not compete due to their inability to serve large enterprise customers similar to Dell.

Dell should continue to focus on relatively low cost, quality customized products through direct distribution. As technology and computers evolve with more computer alternatives, they should adapt to producing a more diverse product line but continue the same production and distribution process that has brought the firm so much success thus far. 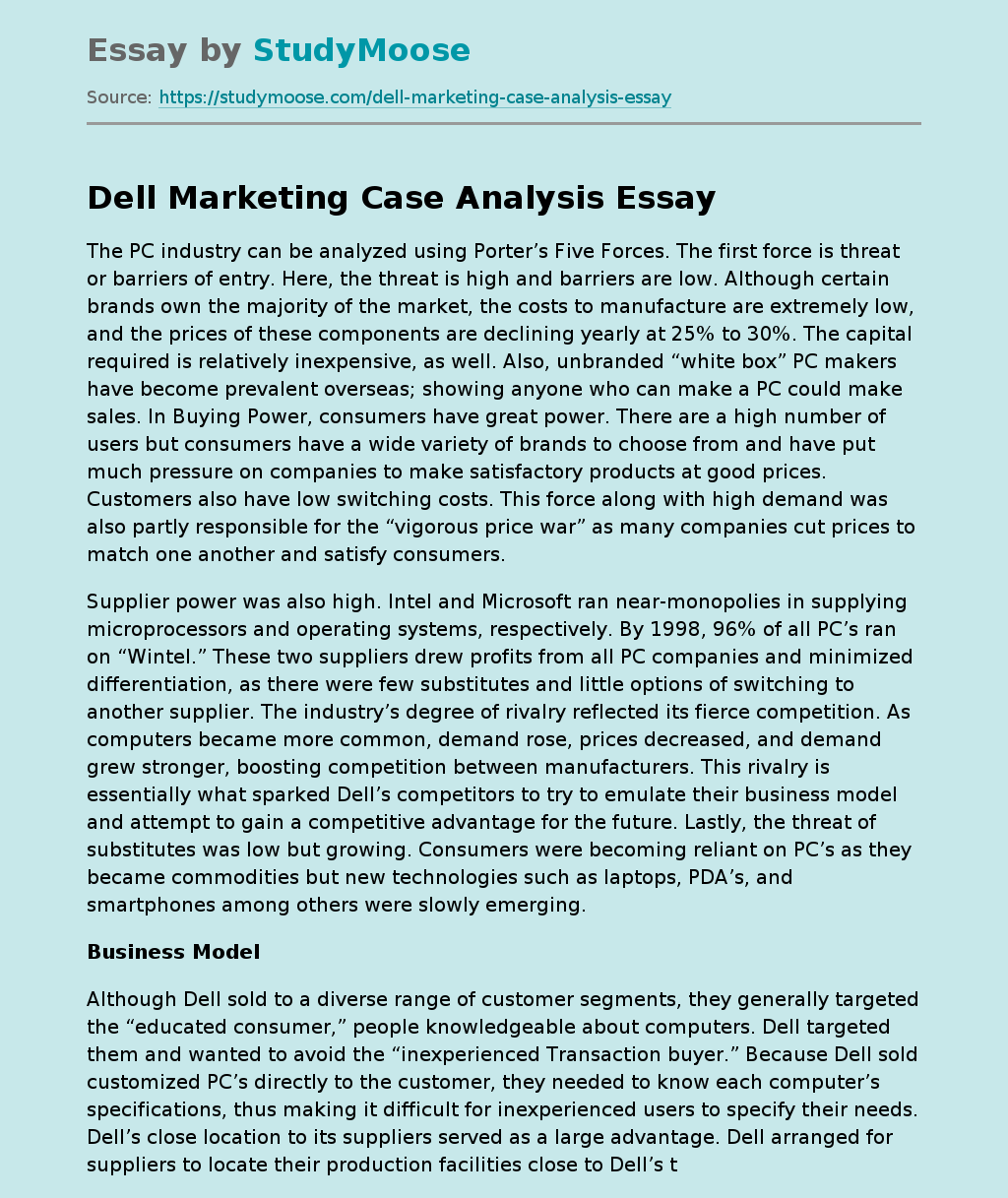