Dehumanization In The Holocaust

As the German economy declined President Paul von Hindenburg looked for outside influences to help improve the economy. Using Adolf Hitler, Von Hindenburg terminated the democracy and started new laws. After Von Hindenburg died, Hitler took complete control as the new dictator of Germany. During World War I, Nazi Germany and its collaborators murdered six million Jewish men, women, and children in the time period known as he Holocaust. Concentration camps, Auschwitz, and medical experiments contributed to the attempts of systematic dehumanization during the holocaust.

Don't use plagiarized sources. Get your custom essay on
“ Dehumanization In The Holocaust ”
Get custom paper
NEW! smart matching with writer

Initially, Hitler and his armies built concentrations camps to seclude anyone not perceived as the ideal human being. Upon taking one step off of their transportation Jews immediately separated into different groups, the weak sent off for death, while the strong stayed. In his book, Holocaust, Geoffrey Wigoder says, “Upon arrival at Auschwitz, Jews faced selection. A SS physician would divide the young and the able-bodied from other prisoners.

Those selected to die would be sent directly to the gas chambers.

Proficient in: The Holocaust

” (“Wigoder 190”) The SS officers used the new delivery of prisoners as a selection process to decide who stayed to work while the unfit reluctantly left for the gas chambers. With scarce resources, officers used food as a privilege and a punishment, with little to no food, prisoners saw the idea of eating as a confirmation of another day of living. Johann Paul Kremer explains, “Typically prisoners got a little more than 1000 calories a day; most of the “food” was nearly inedible. Within three to six months, many prisoners succumbed to starvation.

” (“Kremer”) Even though the prisoners ate everyday, the SS did the bare minimum of keeping them alive, only feeding them inedible food. With the over population of prisoners in camps the Nazis took advantage of the numerous people and put them to work for their own military needs.

In the article, Concentration Camps, it states “The incarceration of increasing numbers of people in the concentration camps assured at least the quantity of the labor supply even as the brutality if the regimen inside the camps depleted the number of available workers.” (“Concentration Camps”) With the camps quickly filling up the SS had an easy access for workers, but the conditions of the camps made it difficult to sustain high survival rates. Contrary to the harsh life of living in a concentration camp, prisoners did everything necessary to keep fighting, waiting for their rescue. Additionally, Auschwitz I, II, and III some of the more well know camps, abused and killed a majority of all prisoners that went through their gates. The Nazi’s took advantage of every aspect to having prisoners in their camps, whether they took away lives or put people to work. In the article A Tortured Legacy, written by Andrew Nagorski explains, “Auschwitz was both a death camp and a complex of labor camps, which accounts for a relatively large number of survivors.” (“Nagorski”) Auschwitz camps murdered million people, but the prisoners put aside that worked survived through the harsh conditions and ended up living a full life after. Having no empathy at all, the soldiers used whatever storage available, and when full, they used outside resources and compacted as many prisoners in as possible. Johann Paul Kremer states, The overcrowding of the barracks is something that virtually even-survivors memoir stresses.

Many of those barracks were built to standard design OKH 260/9 – that had been developed to stable 52 horses. … the barracks “housed hundreds of human beings in space that barely gave room to breath.” (“Kremer”) Every camp experienced over population but since Auschwitz, one of the more popular camps, filled up quickly, an alternative to wasting money to build more space had an easy solution, to put prisoners where animals previously lived. Auschwitz, known for killing, gave prisoners a new hope to live when jobs kept people out of the gas chambers and in the kitchens. Andrew Nagorski also says, Torture was a common place and the early mortality rate was very high. That changed once prisoners latched onto jobs- in the kitchens, warehouses, and other sheltered places-which increased their odds for survival. Of the 150,000 Polish prisoners who were sent to Auschwitz about 75,000 died there. (“Nagorski”) Although Auschwitz killed many, it also saved many lives, giving opportunities to work keeping prisoners out of harms way.

Millions went through the walls of Auschwitz, it provided as a last destination for some, but for others it brutally took a never forgetting toll on many lives. Lastly, Nazi’s doctors took advantage of the prisoners using them as test subjects for their own experiments. For war purposes, German physicians tested multiple scenarios that might occur while fighting. In the article Josef Mengele, by Michael Berenbaum, explains, In Dachau, physicians from the German air force and from the German Experimental Institution for Aviation conducted high-altitude experiments, using a low-pressure chamber, to determine the maximum altitude from which crews of damaged aircraft could parachute to safety. Scientists there carried out so-called freezing experiments using prisoners to find an effective treatment for hypothermia.

They also used prisoners to test various methods of making seawater potable. (“Berenbaum”) The doctors took advantage of their access to people and used them as test subjects to try out their own theories, when the prisoners had no way of saying no. Scientist used the concentration camp prisoners as lab rats for their own use and abused their power as doctors when tested out experimental drugs. Michael Berenbaum also says, “At the German concentration camps … scientists tested immunization compounds and sera for the prevention and treatment of contagious diseases, including malaria, typhus, tuberculosis, typhoid fever, yellow fever, and infectious hepatitis.” (“Berenbaum”) So many people in such a small area made it easy for infectious diseases to spread quickly, which led the doctors to use this as an opportunity to make a name for themselves by trying out self made cures on the prisoners. Josef Mengele, a very well known doctor throughout the camps and today, played a huge part in the camps, constantly trying new ideas and keeping souvenirs.

Lastly, Michael Berenbaum states, “Mengele also attempted to demonstrate the “degeneration” of Jewish and “Gypsy” blood through the documentation of physical oddities and the collection and harvesting of tissue samples and body parts.” (“Berenbaum”) Since Mengele started from the bottom he wanted to make a name for himself and he sought to do this through proving degeneration through Jews, he tried doing this by keeping body parts and sampling tissues. Exploited through the doctors, prisoners had to withstand serve experiments constantly pushing their limits.

With the help of outside resources, Hitler and his armies used unnecessary tactics to terrorize and dictate Germany. As the economy constantly fell downhill, and Hitler there at Von Hindenburg’s constant aid, Germany looked for the way out. Hitler took the position as absolute dictator and ended up taking the lives of millions. At all costs Hitler made sure to get rid of the impurities using concentration camps and medical experiments to carry out the process. During the Holocaust the Nazis used the Jews, manipulating them, subjecting them to the harsh conditions of unhealthy living, little to no food, and experimental tests, having no input on their lives.

Dehumanization In The Holocaust. (2016, Mar 02). Retrieved from https://studymoose.com/dehumanization-in-the-holocaust-essay 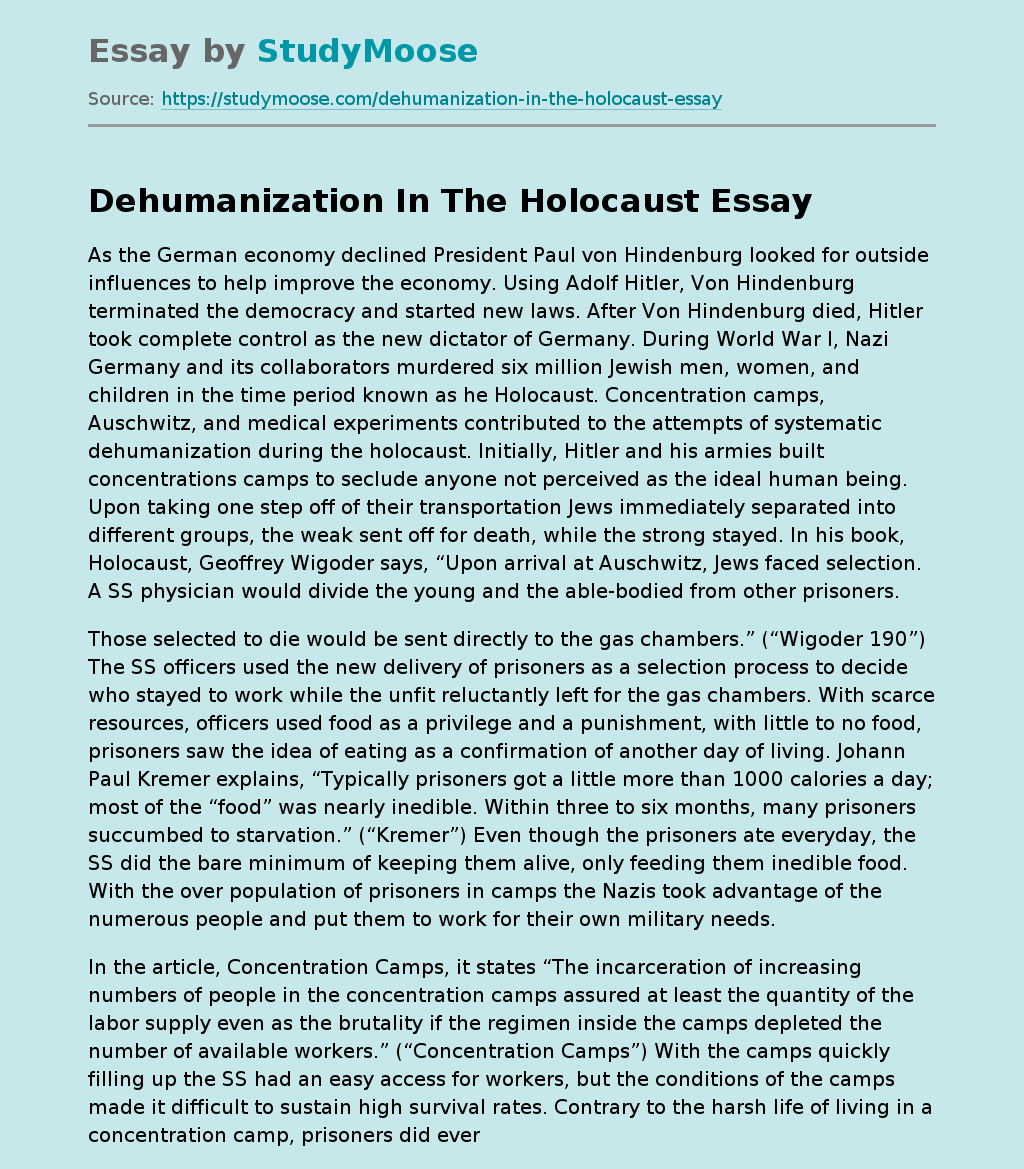