Costa Rica is famous for it’s rainforests and vast biodiversity and ecosystems, including 12,000 species of plants, 1,239 species of butterflies, 838 species of birds, 440 species of reptiles and amphibians, and 232 species of mammals (Wikipedia), which overtime have become under threat due to deforestation. Since the end of World War II, 80 percent of Costa Rican forests have disappeared (Wikipedia). Various companies are cutting down forests, to provide land for there fruit plantations and cattle ranches. During the 1990s, Costa Rica had one of the worst deforestation rates in the world.

Don't use plagiarized sources. Get your custom essay on
“ Deforestation in Costa Rica ”
Get custom paper
NEW! smart matching with writer

Clearing out forests is causing flooding, desertification, sedimentation in rivers, loss of wildlife diversity, and is the number one contributor to global warming. The country has laws protecting certain areas of the forests, but only 25 percent of Costa Rican forests are completely protected from companies due to lenient laws (Viva Costa Rica). Businesses that are clearing out Costa Rican forests are contributing to the destruction of the earth’s environment. Beef production is the largest cause of deforestation in Costa Rica.

Approximately 60 percent of Costa Rica has been cleared out to make room for cattle ranching (Algee, “Cattle Ranching”). During the 1960s, problems worsened when the United States offered Costa Rican cattle ranchers millions of dollars in loans to produce beef (Viva Costa Rica), so all the ranchers had the forests cleared for space for more cattle. After Costa Rica stopped shipping cattle to the U. S. , the country was left with bare spots, where trees were cleared out, and most of the cattle was moved to the Pacific Northwest side of Costa Rica.

These pesticides used to maintain fruits, may enter the water systems and contaminate the water. Nutrient balance in the soil is also disrupted by the removal of the rainforests to make way for fruit plantations, by exhausting the soils and leaving them weak. Weak soil makes it challenging to maintain the land for agriculture. When a ground surface is stripped of vegetation, the upper soils becomes helpless to water erosion. Costa Rica loses about 860 million tons of valuable topsoil every year (Mongabay). Forests have a natural ability to absorb water when it rains, and release it slowly into rivers.

Without the vast amounts of vegetation, flash floods are caused, the water rushes into the rivers, taking the sediment with it. Once the sediment builds up, the water no longer flows, and it floods the areas. The increased sediment load of rivers suffocates fish eggs, causing lower hatch rates, reducing the fishing industry. Erosion also destroys roads and highways that cross through the forest. The government does not shut down the roads, but must rebuild them repeatedly, using money that could be used more productively elsewhere.

Deforestation is the number one cause of global warming. In his article “Deforestation: The Hidden Cause of Global Warming”, Daniel Howden explains “Carbon emissions from deforestation far outstrip damage caused by planes and automobiles and factories … deforestation accounts for up to 25 percent of global emissions of heat-trapping gases, while transport and industry account for 14 percent each; and aviation makes up only 3 percent of the total” Deforestation results in the immediate release of carbon stored in trees as carbon-dioxide emissions. Trees are 50 percent carbon.

When they are felled or burned, the carbon dioxide they store escapes back into the air. Carbon dioxide helps absorb heat; therefore too much carbon dioxide results in global warming. Costa Rica has an amazing conservation program that protects more than 10 percent of the country (Mongabay). One protected strip of forest runs for 40 miles, through nine ecological zones. The country presented a plan in 1995; to protect 18 percent of the country in national parks and another 13 percent in privately owned preserves. The country is targeting to protect the areas with the most biodiversity.

The government funds the project by issuing landowners forest protection certificates, which will annually pay landowners about $50 for every 2. 5 acres of forest, with the agreement that the forest will be protected. In 2005, another program added Costa Rica to which wealthy nations were called to compensate poor nations for rainforest conservation. The amount of Costa Rican land deforested annually has declined since 1977, by 118,158 acres (Wikipedia). Around two-thirds of Costa Rica’s remaining rainforests are now protected.

Companies that are felling trees in Costa Rican forests are destroying the earth’s environment. These companies that contribute to deforestation are killing various species, and are ultimately harming the earth itself through greenhouse gas emissions. Costa Rica is doing a great job repairing their forests, and making sure that certain areas will remain untouched. Last year, the country passed a law that will decentralize their decision-making. The efforts the country is making to stop deforestation, is causing Costa Rica to stand out and show their commitment toward environmental and natural resources issues. 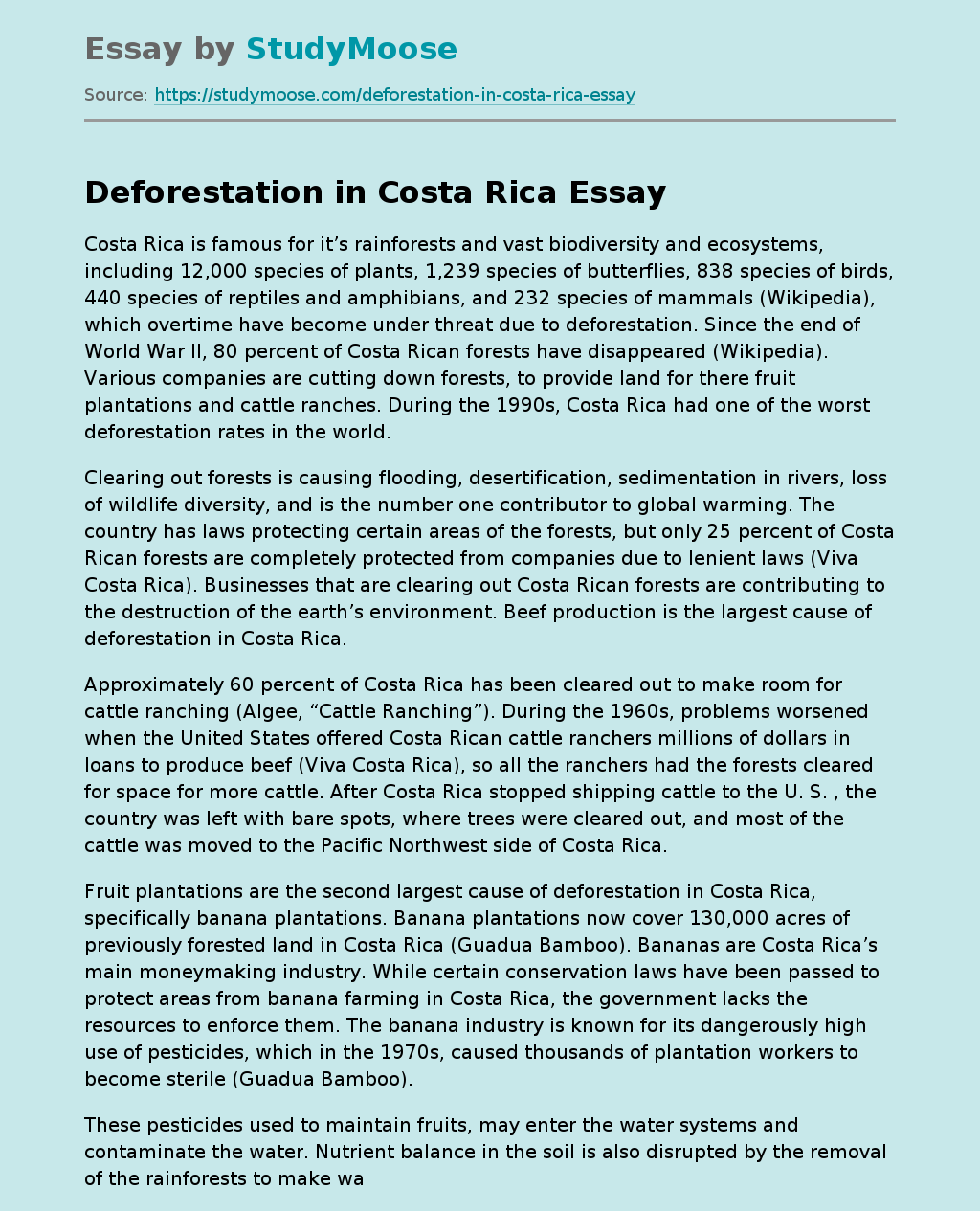