Definitions of Economics by Adam Smith and Alfred Marshall

According to J B Say, economics was defined as: “Science which deals with wealth”. According to the definitions as pronounced by Adam Smith and J B Say, the main focus of study for economics has been defined as “accumulation of wealth” or “science of wealth”.

The following are the merits of the definition pertaining to science of wealth: 1.It focuses on important aspects of economics like production, distribution etc., 2.It highlighted an important problem faced by each and every nation of the wealth, namely creation of wealth and 3.

Turn in your highest-quality paper
Get a qualified writer to help you with
“ Definitions of Economics by Adam Smith and Alfred Marshall ”
Get high-quality paper
NEW! AI matching with writer

The problem of poverty and unemployment can be solved if wealth is produced and distributed equitably. The following are the demerits with regard to the definition pertaining to science of wealth: •It concentrates only on material wealth and ignores creation of immaterial wealth like services of doctors, chartered accountants etc., •It also ignores social welfare

Under this group of definitions, the emphasis is on welfare as compared with wealth in the matter of group.

Alfred Marshall, the neo-classicist raised economics from its ignoble position to a noble one and it was he who shifted the emphasis from wealth to welfare.

Economics was defined as follows according to him: “Economics is a study of mankind in the ordinary business of life and it examines that part of individual and social action which is most closely connected with the attainment and with the use of the material requisites of well-being. Thus, it is on the one side a study of wealth and on the other and more important side, a part of the study of man”.

It can be seen that economics has been defined as a study of mankind in the ordinary business of life. Ordinary business of life means those activities which occupy considerable part of human effort. The fulfillment of economic needs is a very important business which every man ordinarily does. According to Professor Marshall, economics has been understood as the study of wealth; however, it is also the study of man, his desires and necessities.

The following are the demerits in defining economics as the science of material well-being: •It ignores things like services of singers, teachers, actors etc., •It is very difficult to state that which things would lead to welfare and which will not.

Definitions of Economics by Adam Smith and Alfred Marshall. (2016, May 05). Retrieved from https://studymoose.com/definitions-of-economics-by-adam-smith-and-alfred-marshall-essay 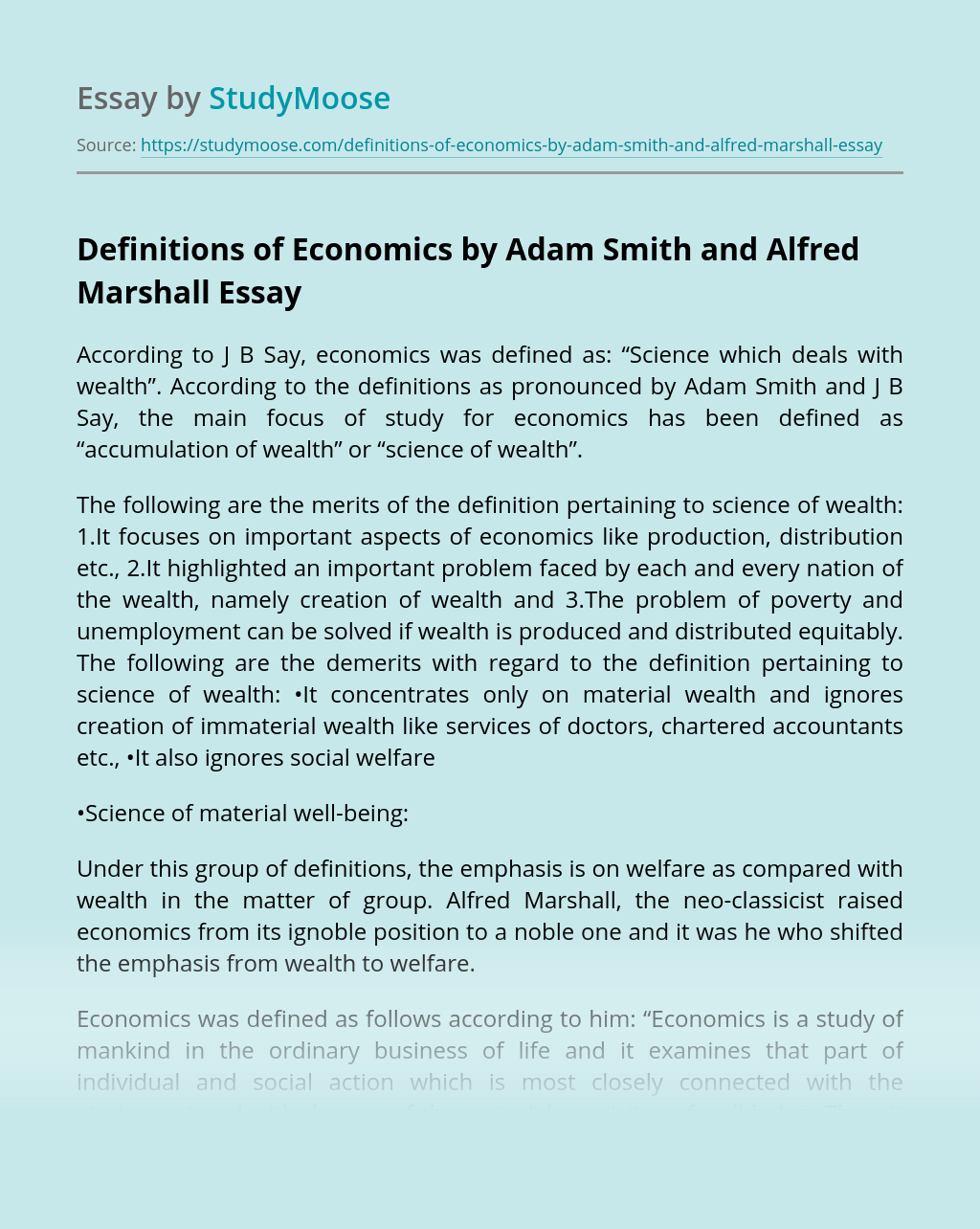 Turn in your highest-quality paper
Get a qualified writer to help you with
“ Definitions of Economics by Adam Smith and Alfred Marshall ”
Get high-quality paper
Helping students since 2015
Stay Safe, Stay Original