A Decade of Organizational Change at Unilever

1. Decentralization was a source of strength for Unilever. The company create basis of subsidiary companies in major national market. Each market were responsible for production, sales and distribution of products in that market. Example western Europe had 17 subsidiaries in the early 1990’s.

a. Different national market, Profit center and accountable for its performance

b. Local managers were allowed to match product offerings and marketing strategy to local tastes and preferences to fit the prevailing retail system.

2. which were responsible for production.

Don't use plagiarized sources. Get your custom essay on
“ A Decade of Organizational Change at Unilever ”
Get custom paper
NEW! smart matching with writer

1. Why did Unilever’s decentralized organizational structure make sense from the 1950’s through the 1970’s? Why did this structure start to create problems for the company in the 1980’s?

Ans: Because then there was almost no competition in the markets Unilever was targeting, they mostly maintained the largest market share and there was probably not so much international influence from other multinationals. The structure began to create problems for the company because influencing other multinationals (competitors like Nestle and Procter & Gamble) started to offer :-

* Executing simultaneous product launches in several national market OR Unilever decentralized structure work against the company effort to build Global or regional brand which led the company into :

What was unilever trying to do when it introduced a new structure based on business groups in the mid 1990s ? Why do you think this structure failed to cure Unilever’s ills ?

Unilever want to drive down operating costs and speed up the process of developing and introduceing a new products by introducing a new structure based within each business groups by division to focus on a specific category of products.

Example the European Business Group has a division focused on detegents, another on ice cream and frozen food etc… Unilever failed in the structure based on business groups example the number of soap manufacturing plants was cut down from 10 to 2 and also some new products Each business group included a number of divisions and each division was focusing on a specific category of products.

So by having these different groups, it was possible to reduce costs and speed up the process of introducing new products. This new approach was very successful, for example with the number of European plants manufacturing soap was cut from 10 to 2. Purchasing costs were also cut down and by taking these steps, Unilever saved about $400 million Question 3. In 2000 unilever switch to a structure based on global product division. The logic was to cut the number of brands that unilever sold from 1600 to just 400 that should be market on regional or global scale. Read why estle kills babies

To support this this new focus the company planned to reduce :

3. Each division focus on developing , manufacturing and marketing either food or personnel care

The shift of resources appeared to make much sense, given that in 2006 Unilever’s developing-world sales grew 8 percent over the previous year, whereas sales in western Europe inched ahead only 1 percent and U. S. sales grew 2. percent. It nevertheless remained to be seen whether Cescau’s initiatives were sufficient to achieve the company’s stated goal of annual increases of overall revenues of between 3 and 5 percent. Additional resources were being deployed to emerging markets, such as India and China, that had young populations with fast-growing incomes. In 2006, 41 percent of Unilever’s revenues were generated in the developing world, up from 22 percent in 1990. For the first time, Unilever derived more of its sales from developing countries than from western Europe.

A Decade of Organizational Change at Unilever. (2020, Jun 01). Retrieved from https://studymoose.com/decade-organizational-change-unilever-new-essay 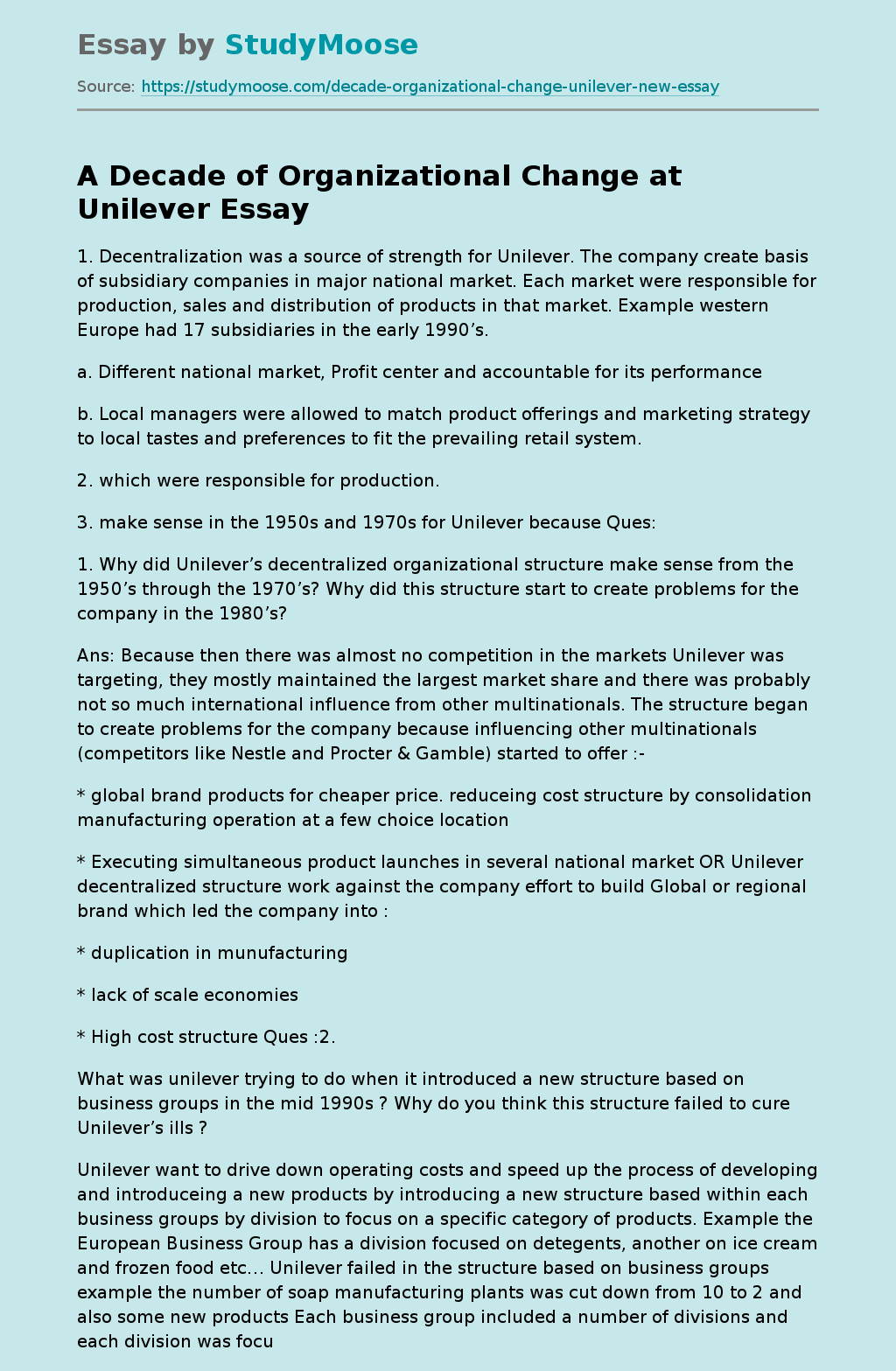