Debate about the pros and cons of legalizing guns

Over the past few weeks, my group and I have been in a constant debate about the pros and cons of legalizing guns in the United States. This has been a constant debate that has been going on for sometime now. My group and I had the opportunity to really explore both sides thoroughly. It was amazing to find out the citizens of America were truly divided on the decision for guns to be legalized. According to The Resnick articile (1999), In 2008, the United States Supreme Court in District of Columbia v.

Don't use plagiarized sources. Get your custom essay on
“ Debate about the pros and cons of legalizing guns ”
Get custom paper
NEW! smart matching with writer

Heller, 554 U.S. 570 (2008), held that the Second Amendment to the United States Constitution protects an individual’s right to possess a firearm for private use within the home in federal enclaves. In 2010, in McDonald v. Chicago, 561 U.S. __ (2010), the Supreme Court held that the right of an individual to keep and bear arms protected by the Second Amendment is incorporated by the Due Process Clause of the Fourteenth Amendment and applies to the states.

That American citizens have a right to own firearms is conclusive and irrefutable. Due to this argument, it’s only right for the people of America to embrace the right to protect your homes and family by having the right to purchase a weapon. People also value the right to have a gun for personal pleasure. There are men and women that enjoy the sport of hunting and those of us that love to go out to a range and shoot at target. According to The Pros & Cons (2014), if we opt not to legalize guns, we would potentially increase Black Market trade and ruin commercial trade, hinder evidence for prosecution, influence effects of socialism and totalitarianism to be seen upon a country’s social and government infrastructures.

Some people view guns as not being safe at all. People feel there aren’t enough restrictions for guns. There are far too many people with criminal backgrounds that have direct access to guns. Guns have been viewed as being an addition to violence. Over the years, we’ve seen children shooting children with their parent’s gun. Guns are easily accessible on the Black Market. Terrorists are utilizing guns to bully our citizens. According to Messerli (2012), Suicides and crimes of passion are higher with gun availability, as it’s much easier to act immediately on your impulses when a gun is available. As we can see, one could argue that we should ensure that guns remain legal in the U.S. and one could argue that we shouldn’t. Based on the information read, my team and I have come to the conclusion that the pros to legalizing guns should definitely win this argument. No one wants to violate the rights of the men and women of America.

Debate about the pros and cons of legalizing guns. (2016, Sep 14). Retrieved from http://studymoose.com/debate-about-the-pros-and-cons-of-legalizing-guns-essay 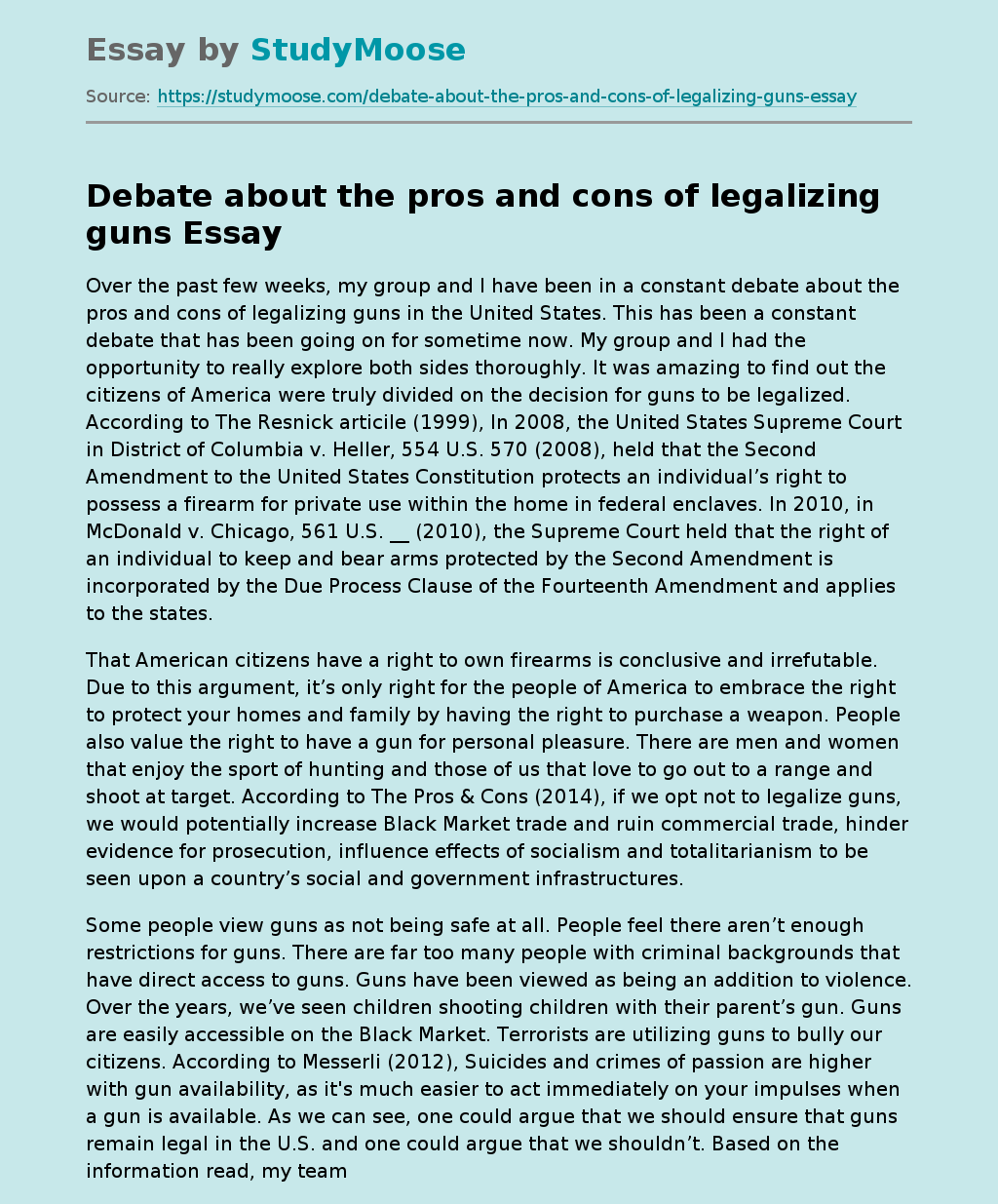