During Spanish colonial rule, the most common method of executions were shooting by the firing squad (especially for treason/military crimes, usually reserved for independence fighters) and garrotte (a notable case would be the Gomburza). A prominent example is the country’s national hero, Jose Rizal, who was executed by firing squad on the morning of December 30, 1896. In 1926, the electric chair was introduced, by the United States colonial government. This made the Philippines the only country besides the United States to employ this method.

Don't use plagiarized sources. Get your custom essay on
“ Death Penalty in Philippines ”
Get custom paper
NEW! smart matching with writer

The last colonial-era execution took place under Governor-General Theodore Roosevelt, Jr. in February 1932. There were no executions under Manuel L. Quezon, the Commonwealth’s first President.[2] 1946 to 1986

The capital crimes after regaining full independence were murder, rape and treason. Notable cases includes Julio Gullien, executed on for attempting to assassinate President Manuel Roxas, or Marcial “Baby” Ama, electrocuted at the age of 16 on October 4, 1961. “Baby” Ama became a subject of a famous 1976 film Bitayin Si baby Ama.

Totally, 51 people were electrocuted until 1961. Another famous death penalty case was of former powerful Governor of Negros Occidental Rafael Lacson and 22 of his allies, condemded to die in August 1954 for murder of a political opponent.[6] Ultimately, Lacson was never executed. Executions number climbed under President Ferdinand Marcos. Ironically, Marcos himself was sentenced to death in 1939 for murder of his father’s political opponent, although he was accquited during appeal. A well-publicised triple execution took place in May 1972, when Jaime José, Basilio Pineda, and Edgardo Aquino were electrocuted for the 1967 abduction and gang-rape of the young actress Maggie dela Riva.

Under the Marcos regime, drug trafficking also became punishable with death by firing squad. A notable execution was that of drug trafficker Lim Seng, whose death in December 1972 was broadcast on national television. Future President and then Chief of the Philippine Constabulary, GeneralFidel V. Ramos, was present at the scene. The electric chair was used until 1976, when execution by firing squad eventually replaced it as the sole method of execution. During the Marcos regime, however, countless more people were summarily
executed, tortured, or simply disappeared for opposition to his rule. neutrality is disputed After Marcos was deposed in 1986, the newly-drafted Constitution limited the application of the death penalty to a certain few crimes. This in effect meant that it was totally abolished, making the Philippines the first Asian country to do so. Reinstatement and moratorium

President Fidel V. Ramos promised during his campaign that he would support the reintroduction of the death penalty in response to increasing crime rates. The new law, drafted by Ramos, restored capital punishment by defining “heinous crimes” as everything from murder to stealing a car. This law provided the use of the electric chair until the gas chamber (chosen by the government to replace electrocution) could be installed. The first execution by lethal injection took place under Ramos’ successor, Joseph Estrada, following on a personal appeal by his spiritual advisor, Bishop Teodoro Bacani. Estrada called a moratorium in 2000 to honour the bimillenial anniversary of Jesus’ birth. Executions were resumed a year later. Estrada’s own successor, Gloria Macapagal Arroyo, was a vocal opponent and also approved a moratorium, but later permitted executions and denied pardons. Second abolition

On 15 April 2006, the sentences of 1,230 death row inmates were commuted to life imprisonment, in what Amnesty International believes to be the “largest ever commutation of death sentences” Capital punishment was again abolished via Republic Act No. 9346, which was signed by President Gloria Macapagal-Arroyo on 24 June 2006. The bill followed a vote held in Congress earlier that month which overwhelmingly supported the abolition of the practice . The penalties of life imprisonmentand reclusion perpetua (indeterminate sentence, 30-year minimum) replaced the death penalty. Critics of Arroyo’s initiative called it a political move meant to placate the Roman Catholic Church, some sectors of which were increasingly vocal in their opposition to her rule. Aftermath

President Arroyo controversially pardoned many prisoners during her presidency, including a 2009 pardon for all remaining felons convicted for
the 1983 assassination of former Senator and opposition leader Benigno Aquino, Jr. Methods

The Philippines was the only country aside from the United States that used the electric chair. Until its first abolition in 1987, the country reverted to using death by firing squad. After re-introduction of the death penalty in 1993, the country switched to lethal injection as its sole method of execution. 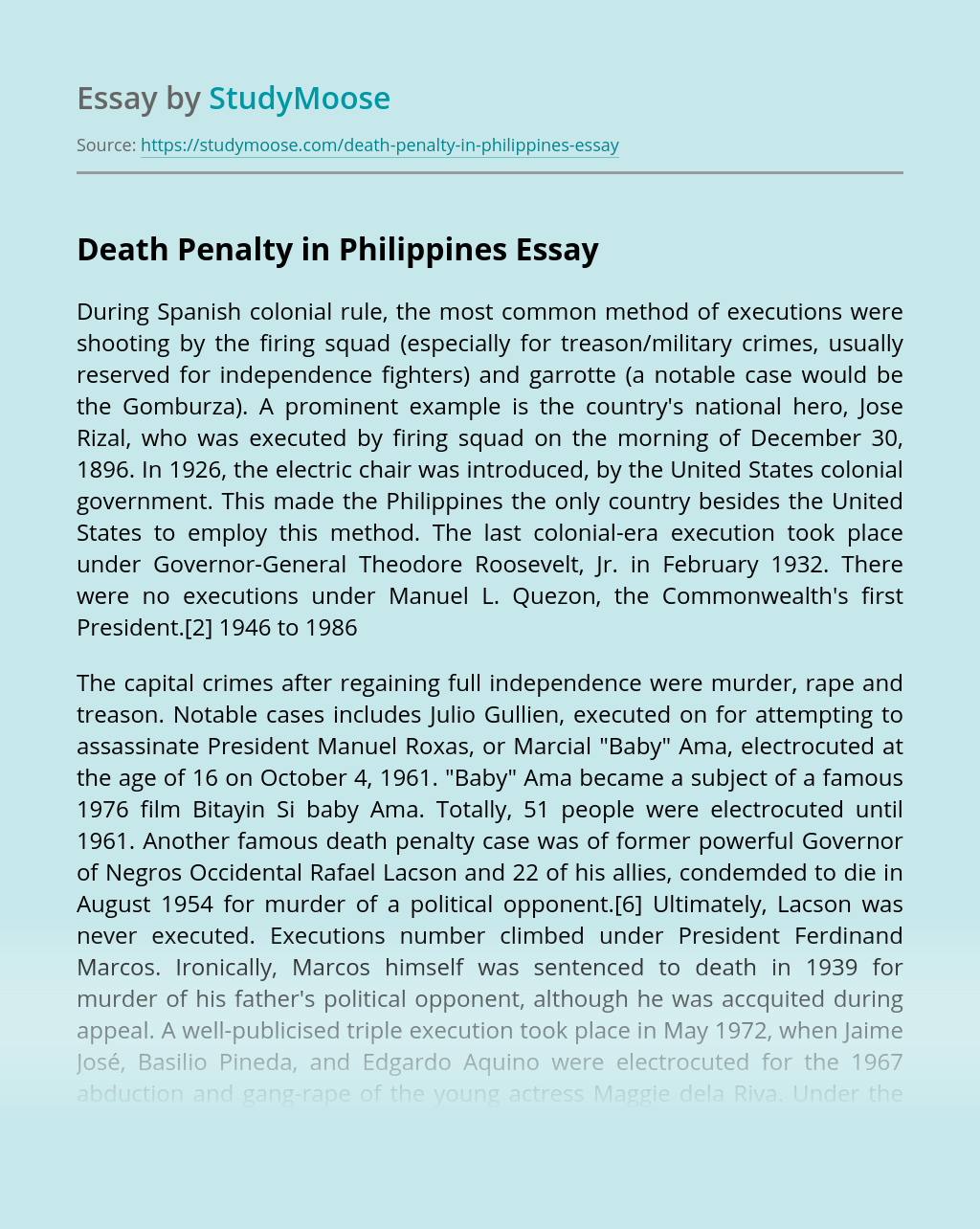