Death Penalty for the Mentally Handicapped

When it comes to the death penalty being given to the mentally handicapped, people have differences of opinions. Many people claim that they should get the same as any other person convicted because they are capable of making their own decisions, and that they completely understand what they are doing wrong, while others are adamant that they should not be held accountable in such a severe manor. It goes without saying that there are different levels of mental illness, and it can be described in many ways.

Don't use plagiarized sources. Get your custom essay on
“ Death Penalty for the Mentally Handicapped ”
Get custom paper
NEW! smart matching with writer

It is the opinion of this writer that a truly mentally handicapped individual is often incapable of understanding what they have done, they are often forced into confessing to committing a crime that they are not really guilty of, and they are often abused and mistreated themselves and without resources. The following essay will explain why a person with a true mental handicap should not receive the death penalty.

First of all, a truly and severely mentally handicapped person will not have the mental capacity to truly understand what they have done or how severe the punishment will be for the crime.

Unfortunately, many members of society today often take advantage of the mentally handicapped. It must be considered that someone with an extremely low level of intelligence could easily be pressured into doing something wrong for someone that they care about. It is also necessary to consider the idea that the person may have committed the crime out of fear, and they did not completely comprehend what they were doing at the time.

Someone with a low intelligence level must be looked at in several ways before receiving punishment. According to experts, more than seventy percent of mentally handicapped persons were unaware of the severity of their crime and its punishment.

Another point worth noting is that fifty-eight percent of the confessions given by the mentally handicapped are false and given because the accused was under great pressure. People with serious mental illnesses are at an extreme disadvantage when trying to defend themselves when they face criminal charges. Those difficulties are even worse when the charges are so serious that the death penalty is sought. As a result, people with mental illness are at a greater risk for losing their lives to unfair rulings of the death penalty. When faced with the constant questioning and extreme interrogation by law enforcement, many mentally handicapped people will cave and just admit to it because they are scared and want it to end. They also confess because they think that will please the one questioning them and do not realize the consequences. It would be extremely easy for the person to become confused and end up saying something that will cause them to be convicted of a crime. A person’s true mental capacity should be looked at before a conviction is made and the death penalty assigned.

Finally, the mentally handicapped are often abused and mistreated themselves, so they could be acting out as a result of that abuse. Many of them are bullied at school, in the workforce, or even in public places. Persons with mental disabilities are four to ten times more likely to be victimized than persons without disabilities. It is also noted that children with disabilities are more than twice as susceptible to physical or sexual abuse than children without disabilities. This should be looked at before a punishment is given for a crime. The death penalty would be a cruel punishment for someone who was reacting to how they had been treated and knew nothing better. Their behavior is often a result of how they were treated themselves.

On the other hand, there are reasons that one would oppose this writer’s opinion. Mental illness has many factors, and there are many types of mental disorders. There are true disabilities, and then there are those who claim that they are mentally ill in order to escape punishment for a crime that has been committed. There is a difference in criminally insane and mentally impaired. For this reason, the courts have established tests that must be given to someone who is claiming to be mentally ill. The first test is an I.Q. assessment. Any score under 70% is considered low. Another test has to do with the way they react in society. Can they keep a job? Can they live without assistance? Do they get along with others? If the accused cannot pass these three tests, then they should not be considered for the death penalty. However, those who are not truly handicapped should be punished. In summation, there are many views on capital punishment in regard to the mentally ill.

Some feel that it is necessary in every case, and others feel that it should only be given in certain circumstances. It is the opinion of this writer that those individuals with an I.Q. lower than seventy and have an inability to survive on their own should not receive the death penalty. This does not mean that they should not be punished for their crime, but that their mental abilities should be taken into consideration. It is widely known that they could be coerced into doing something wrong, and that they may not understand the severity of the crime. It is also a proven fact that individuals with serious mental disabilities are often threatened and talked into making false confessions. They also have difficulty understanding their rights and do not have the means or ability to help themselves. It is society’s responsibility to look out for the truly handicapped because they are often convicted of crimes that they did not understand or that they did not even commit.

Death Penalty for the Mentally Handicapped. (2021, Apr 21). Retrieved from https://studymoose.com/death-penalty-for-the-mentally-handicapped-essay 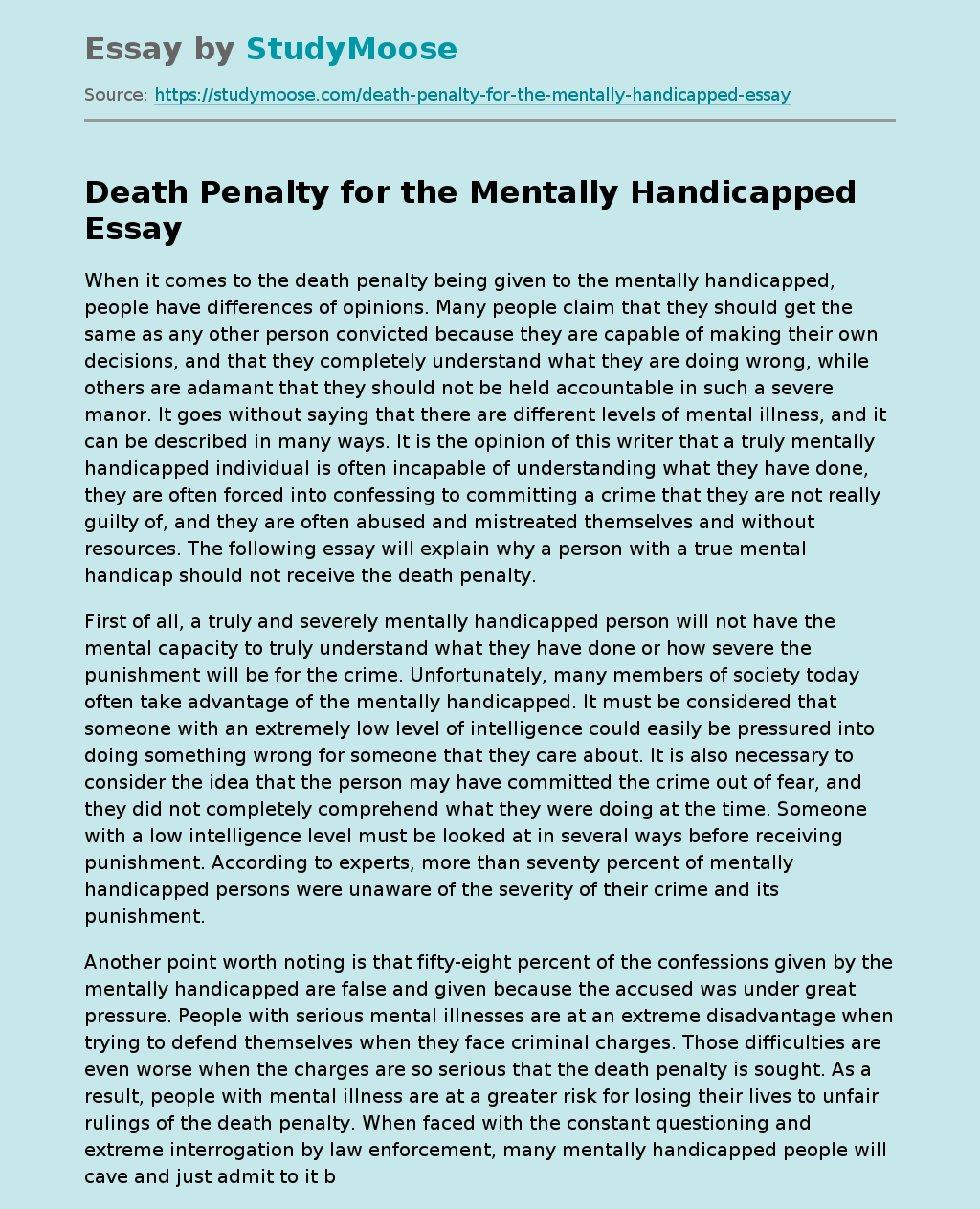