Except for Hector, the Trojans are inside the walls of Troy. Apollo turns to Achilles to tell him he is wasting his time pursing a god since he can’t kill him. Achilles is angry, but turns around to return to Troy where Priam is the first to spot him. He tells Hector he will be killed since Achilles is much stronger. If not killed he will be sold into slavery as has already happened to others of Priam’s sons.

Don't use plagiarized sources. Get your custom essay on
“ Death of Hector Summary ”
Get custom paper
NEW! smart matching with writer

Priam can’t dissuade Hector, even when his wife Hecuba joins the effort. Hector gives some thought to going inside but fears the ridicule of Polydamas, who had given sage advice the day before. Since Hector wants to die in glory, he has a better chance facing Achilles. He thinks about giving Achilles Helen and the treasure and adding to it an even split of the treasure of Troy, but Hector rejects these ideas realizing Achilles will just cut him down, and there would be no glory in that.

As Achilles bears down on Hector, Hector begins to lose his nerve. Hector runs towards the Scamander River (Xanthus).

The two warriors race three times around Troy. Zeus looks down and feels sorry for Hector, but tells Athena to go down and do what she wants without restraint. Achilles is chasing Hector with no chance of reprieve unless Apollo steps in (which he does not do). Athena tells Achilles to stop running and face Hector. She adds that she will persuade Hector to do the same.

Athena disguises herself as Deiphobus and tells Hector the two of them should go fight Achilles together. Hector is thrilled to see his brother has dared to come out of Troy to help him. Athena uses the cunning of disguise until Hector addresses Achilles to say it’s time to end the chase. Hector requests a pact that they will return each other’s body whoever dies. Achilles says there are no binding oaths between lions and men.

He adds that Athena will kill Hector in just a moment. Achilles hurls his spear, but Hector ducks and it flies past. Hector does not see Athena retrieve the spear and return it to Achilles. Hector taunts Achilles that he didn’t know the future after all. Then Hector says it’s his turn. He throws his spear, which hits, but glances off the shield. He calls to Deiphobus to bring his lance, but, of course, there is no Deiphobus. Hector realizes he has been tricked by Athena and that his end is near. Hector wants a glorious death, so he draws his sword and swoops down on Achilles, who charges with his spear.

Achilles knows the armor Hector is wearing and puts that knowledge to use, finding the weak point at the collarbone. He pierces Hector’s neck, but not his windpipe. Hector falls down while Achilles taunts him with the fact that his body will be mutilated by dogs and birds. Hector begs him not to, but to let Priam ransom him. Achilles tells him to stop begging, that if he could, he would eat the corpse himself, but since he can’t, he’ll let the dogs do it, instead. Hector curses him, telling him Paris will kill him at the Scaean Gates with the help of Apollo. Then Hector dies.

Achilles pokes holes in Hector’s ankles, ties a strap through them and attaches them to the chariot so he can drag the body in the dust. Hecuba and Priam cry while Andromache is asking her attendants to draw a bath for her husband. Then she hears a piercing wail from Hecuba, suspects what has happened, emerges, looks down from the rampart where she witnesses her husband’s corpse being dragged, and faints. She laments that her son Astyanax will have neither land nor family and so will be despised. She has the women burn the store of Hector’s clothing in his honor. 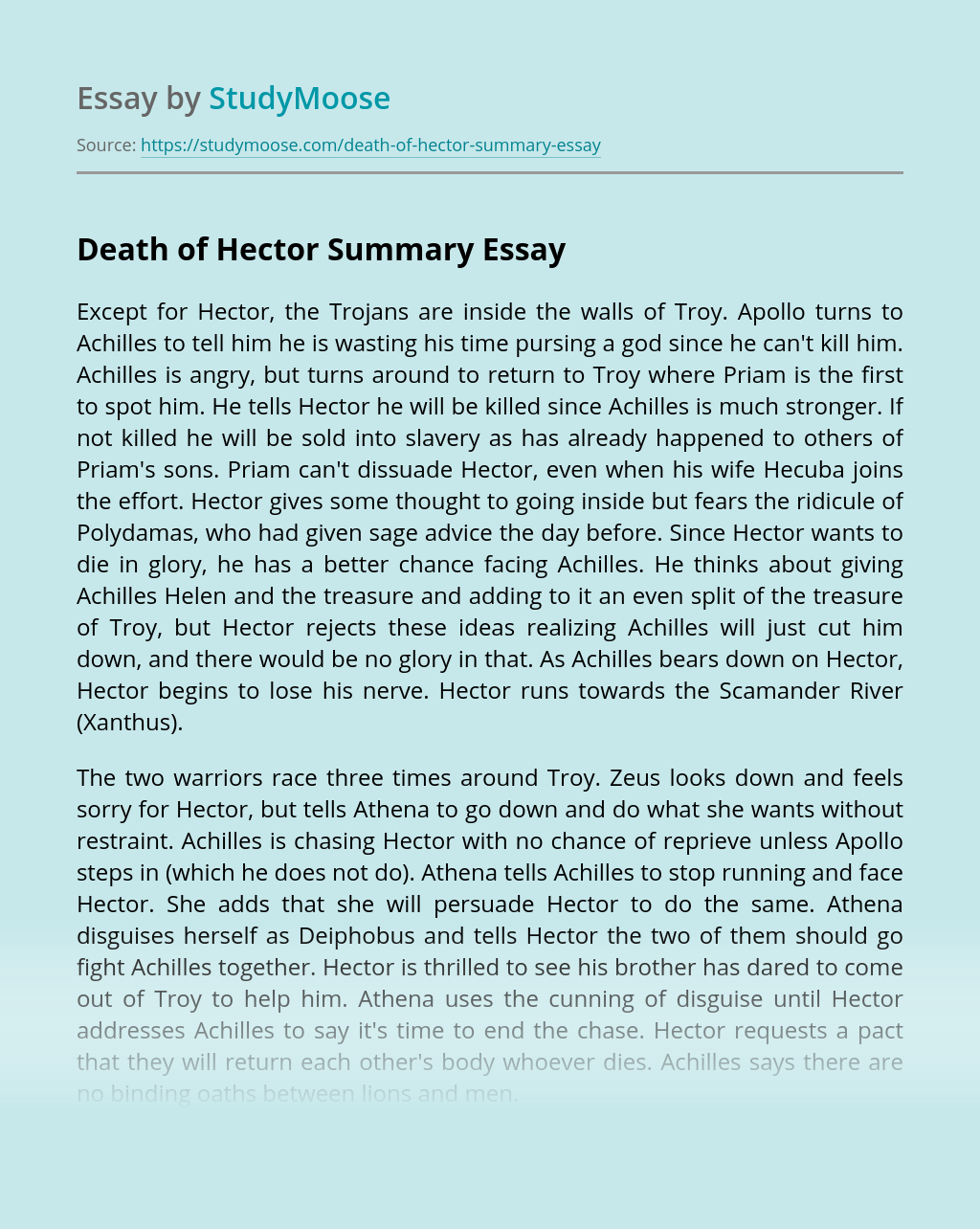