It was said by the eyewitnesses, that Adolf Hitler’s final wish was to have his body burned, out of fear of the Russians cutting him up and showing him off to the world. After the shot was heard ringing out from Hitler’s study, that was the signal for Mr. and Mrs. Goebbels, that the end was quickly approaching. Mrs. Goebbels and Dr. Stumpfegger entered the family quarters were the children were lying in bed waiting.

The doctor gave each of them an injection of morphine to calm them down before the cyanide was administered.

Don't use plagiarized sources. Get your custom essay on
“ Death of Adolf Hitler ”
Get custom paper
NEW! smart matching with writer

As soon as the children were asleep due to th the morphine, the Doctor exited the room. That’s when their mother broke open a glass vile of cyanide into each child’s mouth. All six children were dead within minutes after that. Soon after, Mr. and Mrs. Goebbels, would also be dead from suicide by cyanide.

Once the suicides of Adolf and Eva Hitler, and Mr.

and Mrs. Goebbels were complete, all four corpses were dragged by the SS Body Guards up a long, dimly lit, stairway. Once the guards had the bodies outside of the Fuhrerbunker and concealed in a shallow hole in the Chancellery Garden, they were quickly set ablaze with three or four cans of diesel, this was to be Hitler’s last standing order. After giving one last Nazi Salute, the guards retreated into the safety of the bunker.

Among the 800 or so frantic bunker occupants that were left by this time, mostly low ranking military and people from the encompassing neighborhoods, seeking shelter from the raining shells and the impending invading Red Army just blocks away.

They decided to try and break out, and try to make it to a nearby railway tunnel or the airport or even towards northern Berlin; about 100 people or so made it, the rest were either killed or captured. 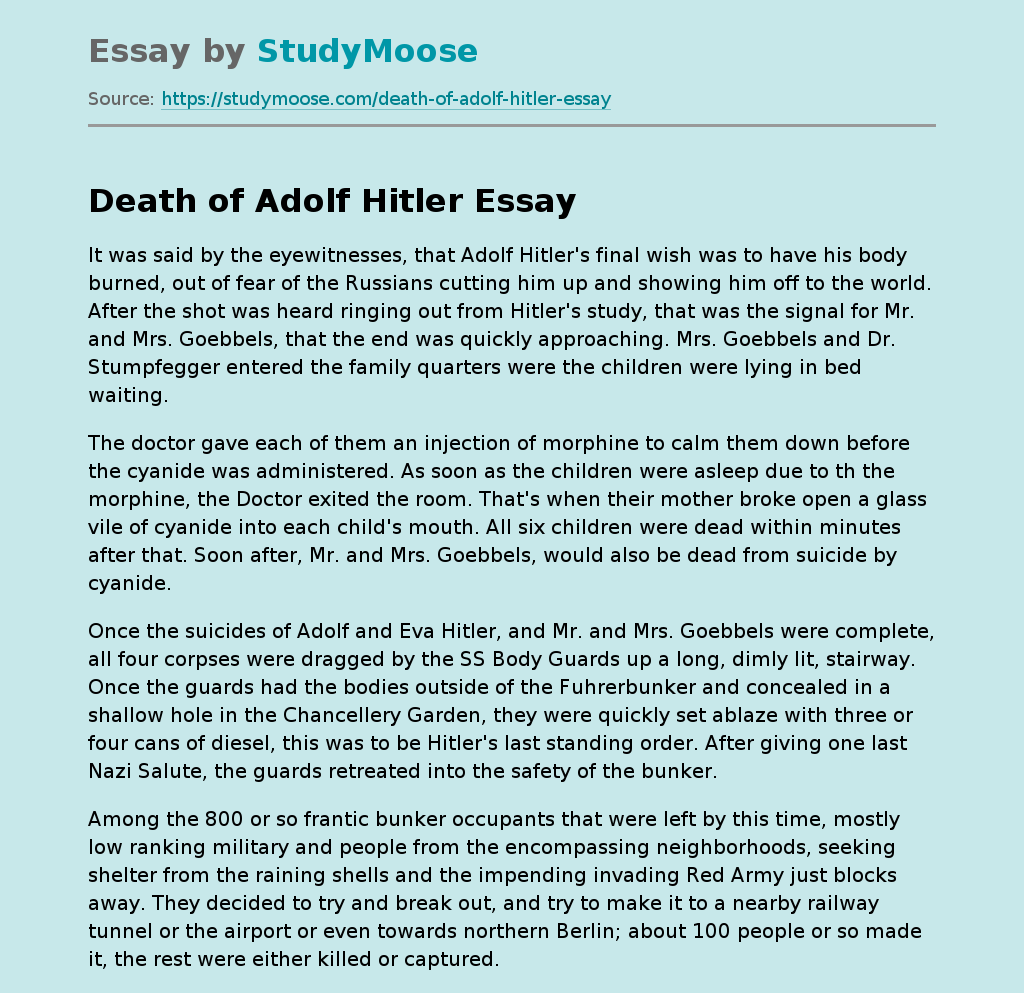