"Death of a Soldier" by Louisa May Alcott

The excerpt “Death of a Soldier,” taken from Hospital Sketches by Louisa May Alcott features various rhetorical strategies to create an appeal to emotion. She exhibits the compassion of the nurse for John, even in the face of inevitable death; she displays the altruistic mindset of John, and adds depth to her words by using analogies. She uses these tools in order to inflict a deep emotional feeling and an understanding of how awful the situation actually was.

One of the rhetorical strategies of this piece is her compassion, even when seemingly futile, for the wounded soldier.

Don't use plagiarized sources.
Get Your Custom Essay on “Death of a Soldier” by Louisa May Alcott Just from $13,9/Page

The way Alcott describes John’s situation as being completely helpless and doomed. The doctor’s words, not having “the slightest hope” for recovery, illustrate his condition. Given this information prior to her attempt to ease his pain, Alcott shows her sheer pity for the “poor lad”. “I bathed his face, brushed his bonny brown hair, set all things smooth about him.” This quote shows how much effort she put into even the slightest difference in his comfort, in hopes of inflicting a “satisfied expression” on a dying face.

She “stirred the air about him with a slow wave of air and waited for him to die”. She stood by him until his breath helping him bear the agony of his inevitable and anticipated death. These examples of her charity instill feelings of understanding and pity for John.

The other side of Alcott’s appeal to emotion is John’s mentality. John questions the nurse in reference to the battle: “…do they think it will be my last?” He is seemingly eager to return to his position and fulfill his duty. He feels loyal to his cause and indifferent to his own well-being. On his deathbed he is only momentarily worried for himself when introduced to his fate. After that brief moment he seems to feel guilty for his “cowardly” cause of death, and justifies it as he “obeyed orders”. With his last “live” breath he asks of the people present that they tell the others he did his best, as he wanted so desperately to make his friends and family proud. He sees the tragedy of his death not in death itself, but in the incapability of action, thereby preventing further altruism. His noble mentality draws the reader away from the image of a boorish, stoic, combatant, towards a kind, caring, “Virginia blacksmith”.

To strengthen the appeal of emotion, Alcott integrates analogies into her writing. She embodies a look of helplessness forced by the inevitability of his death, crossing John’s face in her words, “…over his face I saw a gray veil falling that no human can lift.” She shows the reader how close to death he was, and appeals to the reader with her parallel inability to help him. After he has “died”, she compares his lifeless breathing to “…the waves of an ebbing tide that bear unfelt against the wreck.” This pallid vision shows how although he was not physically dead, he was not really alive.

With such proficient use of these rhetorical strategies, Alcott reaches the emotions of the reader. She shows the compassion of the nurse, to provide the reader with understanding of the atmosphere; she provides insight to the frame of mind of John, to show him as a person who is more than a tool of war; and she intensifies her emotional appeal with analogies, to deepen understanding for the events of the story. Ultimately Alcott amalgamates all these elements in an overwhelming effort to capture the reader’s heart.

“Death of a Soldier” by Louisa May Alcott. (2016, Jun 20). Retrieved from https://studymoose.com/death-of-a-soldier-by-louisa-may-alcott-essay 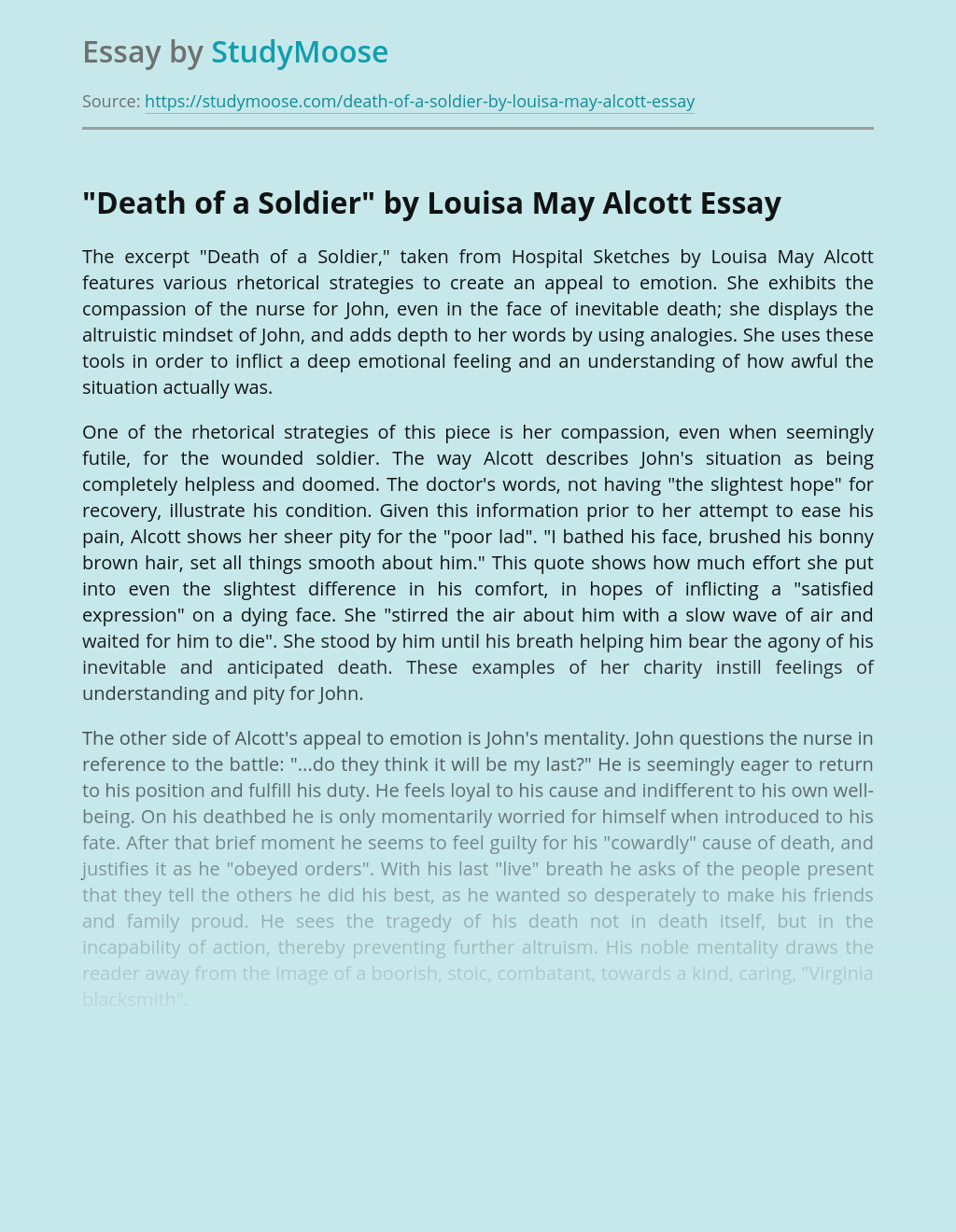 When I Have Fears and Mezzo Cammin

As people near the time of their deaths, they begin to reflect upon the history and events of their own lives. Both John Keats’ “When I have Fears” and Henry Longfellow’s “Mezzo Cammin” reflect upon the speakers’ fears and thoughts of death. However, the conclusions between these two poems end quite differently. Although both reflect...

View sample
Discuss Hamlet's attitude to death and the afterlife

Discuss Hamlet’s attitude to death and the afterlife, giving an indication as to how both contemporary audience and modern audiences might view it. “Hamlet” deals with situations, which require a single-minded response. However, by the end of the twentieth century a large percentage of people were unfamiliar with church worship and words of the bible,...

View sample
Get Essay
The Body by Stephen King

In the novella The Body, author Stephen King makes an attempt to describe a story about losing innocence, just to be replaced by maturity and the corruption that includes it. To do so, King revolves a story around a group of four kids who go on a life changing journey to discover a dead body...

One dreams, through the use of imagination, of what will become of them as life progresses. In some cases that person lives passionately with desires of self fulfillment, eventually reaching their goals in an ever so content way. At other times one remains lost, underappreciated, and ultimately carries with them a perilous, loathing attitude. Willy...

The reason why I chose to write about of A Dog’s Death, is because it reminds me of a dog that I had growing up. Whenever the dog got sick my brothers, sisters and I would always think the worst about what happened to him when he got sick. Since we lived in the country...