The death of Eddie Carbone

Throughout the play Eddie seems to be provoked by Rodolfo’s actions and his attitude towards life and especially towards Catherine. Eddie is disturbed by what he sees as Rodolfo being effeminate. He does not like the fact that Rodolfo is seeing Catherine and hasn’t asked his permission to do so. This leads him to believe that he has no respect for him “He don’t bless me” Eddie believes Rodolfo can’t respect him as he does things with Catherine under his nose.

Don't use plagiarized sources. Get your custom essay on
“ The death of Eddie Carbone ”
Get custom paper
NEW! smart matching with writer

Eddie believes Rodolfo is trying to steal Catherine’s affections just for papers a right to stay in America not because he loves her.

He tells her: “He marries you he’s got the right to be an American Citizen” He believes this as he cares for Catherine too much and can’t bear to let her go and in some ways he loves her too much. I believe Rodolfo plays a major part in Eddie’s death as his jealousy of Rodolfo’s relationship with Catherine drives him to do what he does.

In Act two when Eddie comes home drunk and finds Rodolfo and Catherine in the bedroom it seems to be the last straw for him; he cannot bear to see Catherine with anyone else but himself. He proves this when he kisses Catherine on the mouth.

He has no way of controlling Catherine anymore as she seems to be in love with Rodolfo. Eddie believes that throwing him out is the only way he can be in control.

Therefore it is Rodolfo’s appearance in Eddie’s life that starts the bloody unstoppable course of events which will end in tragedy. Catherine is someone else who adds to Eddie’s rage and contributes significantly to his death. At the beginning of the play she seems to love and care for Eddie and would do anything for him. She comments to Rodolfo: “I can tell when he’s hungry or wants a beer before he even says anything”. In Act one Catherine is very nai??

ve and behaves the wrong way towards Eddie; she acts more like a wife to him than Beatrice does. This makes it even harder for Eddie to accept Rodolfo and Catherine being in love. Her relationship with him affects Eddie Deeply. Eddie tells Catherine over and over that he dislikes Rodolfo and doesn’t want them to be together. He tells her: “you marry him and the next time you see him it’ll be for divorce” Even though Eddie says this to Catherine she ignores it and carries on flirting with him under Eddie’s nose. Eddie’s jealousy and love for Catherine is one of the key factors for his death.

It leads him to tell the immigration about Rodolfo and Marco, even though he knows it will ruin him and his family’s life. Eddie’s own wife Beatrice plays a small but significant part in his destruction but in many ways if she was there for him, supporting him he may have reacted differently towards Catherine and Rodolfo’s relationship. Beatrice supports Catherine a lot in everything she does and seems to argue with Eddie repeatedly just to please her. Beatrice believes Eddie is over protective over Catherine and needs to back down. She says: “Eddie, I want you to cut it out now, you hear me?

I don’t like it! ” It seems Beatrice doesn’t value or understand Eddie which seems to upset and undermine him. Beatrice doesn’t seem to be loving or soft towards him which makes him angrier. Catherine tells Rodolfo “Then why don’t she be a woman? If I was a wife I would make a man happy instead of going at him all the time”. Catherine believes this is why Eddie is so jealous as Beatrice nags and critices him, it makes him believe no one loves or understands him. All these three characters affect Eddie and lead him to his death but the most important character in his downfall is Eddie himself.

When the play begins Eddie Carbone is respected by his friends and family as he is a good man. He is told: “Believe me, Eddie you got a lotta credit comin’ to you” Eddie does everything for his respect but his passions for Catherine are uncontrollable and these bring about his downfall. His pride, jealousy and love for Catherine make him obsessive and determined to get what he wants which is Catherine. Eddie is a tragic hero, he is a person of special qualities who is admired by others but he is destroyed by a flaw within himself. This is his obsession with Catherine and refusal to accept that she must lead her own life.

Eddies aggression starts to break the family apart. He is suspicious of Rodolfo’s interest in Catherine he believes that he seeks to marry her in order to gain American Citizenship. Eddie Carbone is the hero of this particular tragedy. He is a simple, straightforward man who works for his family but his urge to protect Catherine from everything and everyone seems to start the unstoppable chain of events. It is all these factors which force him to consult Alfieri the lawyer for advice even though Alfieri told him to let events follow their natural course. Eddie is forced to betray the brothers to the immigration bureau.

Alfieri warns him: “You want have a friend in the world, Eddie! Even those who understand will turn against you, even the ones who feel the same will despise you” Eddie knows the consequences but thinks this is the only way to get his justice. This act of betrayal towards members of his own family brings about the final bloody tragedy which Alfieri foresaw at his first interview with Eddie. Once Rodolfo and Marco have been picked up by the immigration, Eddie does realise he has done wrong and realises bit by bit he will lose respect of his family and his community.

Marco spits in Eddie’s face and takes the first step in destroying Eddie. “That one! He killed my children! That one stole the food from my children! ” by Marco saying this he turns everyone against Eddie and everyone starts to lose respect for him. Marco is taken to prison. Despite Alfieri’s best efforts Marco is intent upon revenge for his betrayal while at the same time Eddie wants to maintain his reputation and his honour. When Marco gets bail Eddie and Marco come face to face in full view of the neighbourhood.

Eddie clearly wants his respect and all Marco wants is revenge. He claims that he didn’t betray Marco and demands an apology and his respect “Tell the people Marco, tell them what a liar you are! ” Eddie’s lack of respect makes him bring out a knife to fight Marco but is killed by his own knife and instantly looses everything. Finally the importance of respect in this community drives Eddie Carbone to his death. Eddie wants family and community loyalty and this and the characters attitudes towards Eddie are responsible for his downfall and ultimately his bloody death. 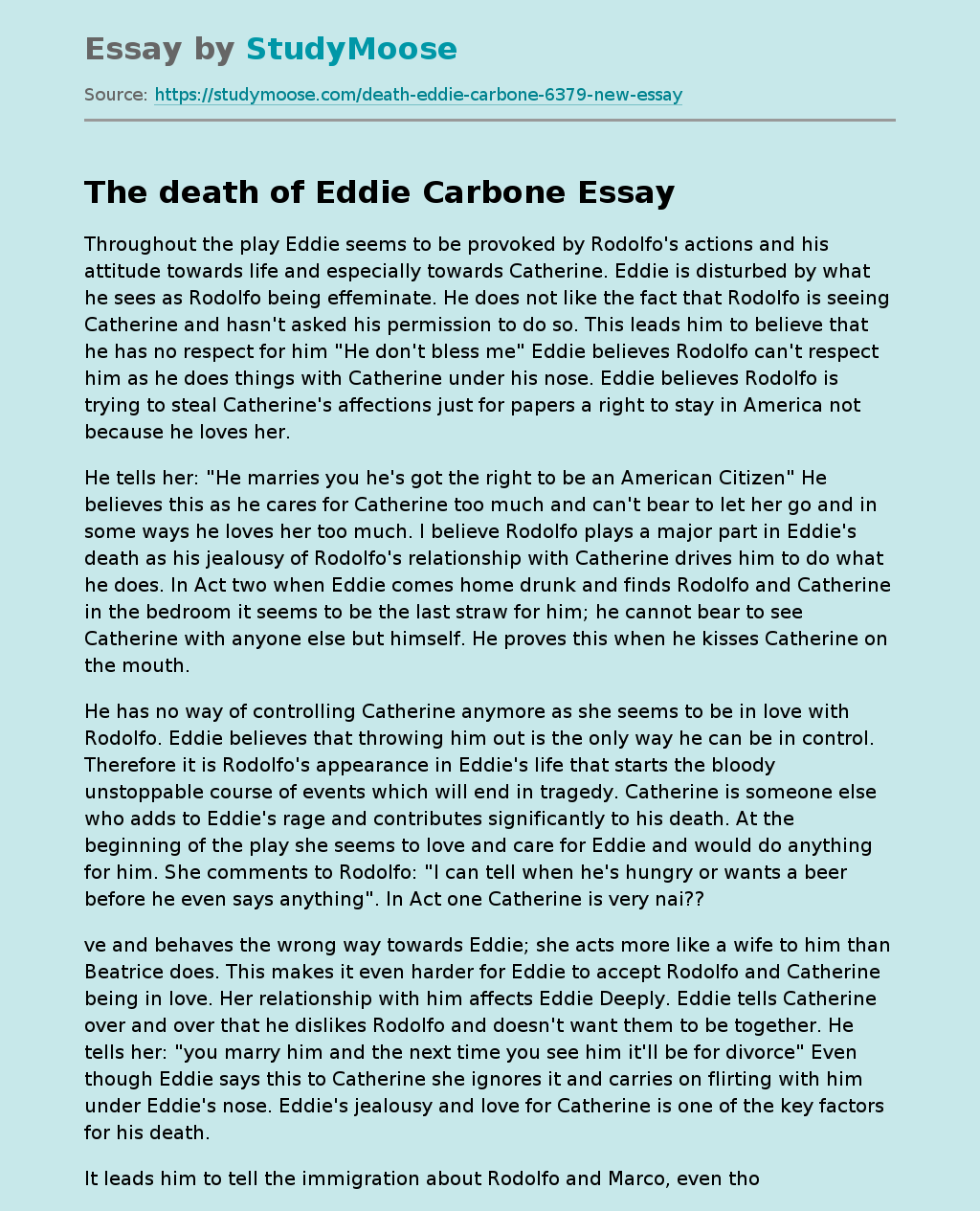