Dealing with the Disintegration of Central Control

What hormonal problem could be causing these symptoms?

Eric’s symptoms include: large hands and feet, low thyroid activity, low cortisone levels, low testosterone levels, high growth hormone levels, and swelling in his right knee. Since most of Eric’s symptoms are hormonal, he is clearly having an endocrine gland problem. Cortisone, testosterone, and growth hormone levels are being affected, it is likely that he his having a hormonal problem within his anterior pituitary gland, because all three of these hormones are regulated by a horomone that this gland secretes.

Don't use plagiarized sources. Get your custom essay on
“ Dealing with the Disintegration of Central Control ”
Get custom paper
NEW! smart matching with writer

Rapid growth can lead to joint damage as the accelerated bone growth disrupts the supply of blood to cartilage.

Should Dr. Kidd tell Eric that he is probably sterile? Why would he be sterile?

Yes, Dr. Kidd should tell Eric that he is probably sterile. Eric could potentially be sterile due to the low levels of testosterone. Low testosterone levels lead to a low sperm count, leading to being sterile. 2. Is there anything that they could try to do to stimulate spermatogenesis? Why is the absence of facial hair important?

The absence of facial hair is important because it may be related to a lack of gonadal stimulant which causes the condition called hypogonadotropic hypogonadism, which results in a decrease or loss of bodily hair. This can also affect development at puberty, resulting in underdeveloped testicles, which once again affects fertility.

Why was he growing facial hair?

Eric is now growing facial hair due to the the human chorionic gonadotropin (hCG) that he had injected. hCG acts like FSH and LH and triggers a variety of secondary sexual characteristics, such as facial hair. 2. Why did he need jaw surgery?

Eric needed jaw surgery because although having too much growth hormone in childhood causes gigantism, later on in adolescence results in acromegaly. Acromegaly is marked by differential growth; bones that have aleady fused do not grow, but other parts in the body may continue to do so. Acromegaly is common in areas such as the hands, feet, and jaw. As a result, Eric’s lower jaw grew, but his upper jaw did not, which caused a misalighnment.

Why are his kidneys so active at night?

Eric’s kidneys are so active at night because he doesn’t make enough of the antiduretic hormone. 2. What hormone could be involved? (unpredictable shock responces) Hormones secreted by the adrenal glands, such as steroids could be involved in causing unpredictable shock responces. 3. If the pituitary is so important, and if Eric is not getting replacements of hormones the pituitary makes (except for ADH), why isn’t he dead?

Eric isn’t dead because you can live without a pituitary, so long as you are on replacement hormones for those organs controlled by the pituitary.

Dealing with the Disintegration of Central Control. (2016, Aug 06). Retrieved from https://studymoose.com/dealing-with-the-disintegration-of-central-control-essay 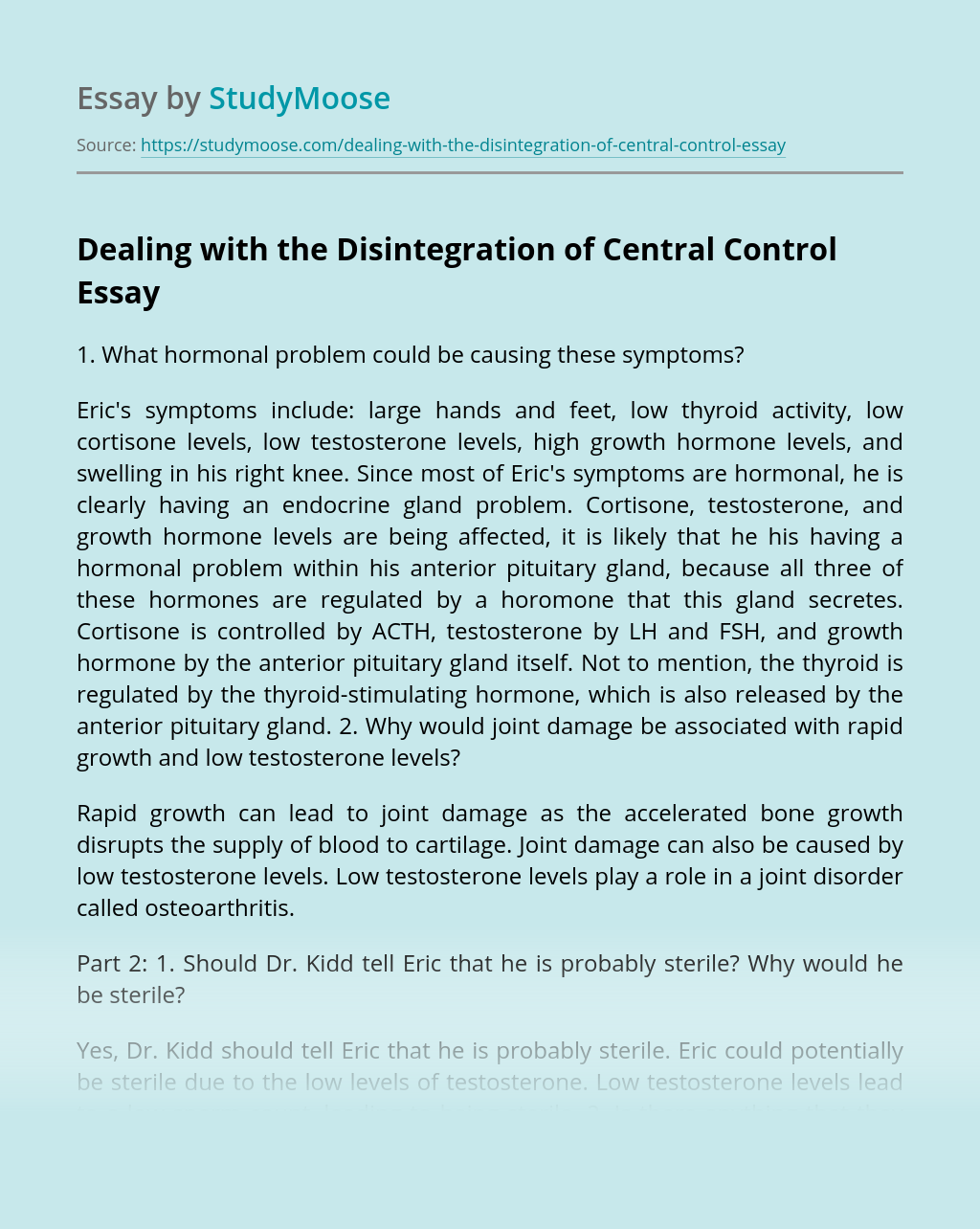