This book was really interesting and touching. The parents of Lynn, the deaf little girl, were very strong parents and their struggle to be able to make their daughters life as normal as possible was hard for them since everywhere they went the answer the always got was, for Lynn to try to talk and be treated as a normal child. As parents, Louise and Tom did everything they were told and only hoped for the best and that one day their deaf child would be able to talk.

Don't use plagiarized sources.
Get Your Custom Essay on Deaf Like Me Book Report Just from $13,9/Page

Since the beginning when they found out their daughter was deaf they did all the research they could to try and be able to make life better for Lynn. Every doctor and specialist they saw always told me to treat her as a normal child, to talk to her, and to not use gestures or sign language.

When Louise and Tom took Lynn to get tested at several different places they finally found that she was profoundly deaf.

They got her a hearing aid to see if this would help her hear better but sadly it didn’t make a difference, Lynn still wasn’t able to hear anything. The things the doctors and specialist told them stuck in their heads; if she did gestures or used signs to communicate she would not have a normal life and be labeled as a deaf person. The way they described this made Louise and Tom think that if their daughter didn’t learn how to speak or read lips she would have a miserable life. They didn’t want Lynn to suffer when she got older they wanted her to grow up like any other child and be able to communicate with others and talk. Lynn wasn’t retarded or handicapped, she was just deaf but because of the information they got it seemed like she was and that was what they didn’t want her to be labeled as.

When they heard about Star King Exceptional School, which was a school for deaf children, they wanted to see if this was a good place for Lynn to attend. This school was an oral school only and kids there were thought how to read lips and learn how to talk. Since they had heard a lot of good things about this school and the way it was described to them they thought this would be the perfect place for Lynn to learn how to talk. Lynn attended here but throughout the whole time she was there she only made a little progress. With practicing at home and at school Louise and Tom knew that she would eventually learn how to talk because she made small progress and was slowly learning. Like I mentioned the information they were told repeatedly was only half the truth.

When they met Barbara Simmons at the meeting they had at the school their lives would finally become less stressful. She thought sign language was a good way to communicate with deaf children and by them learning sign language it would make their lives easier. She introduced them to Jim and Alice Hudson, a deaf couple, and they talked to them about how sign language would help Lynn to do better in life and how in reality she would probably not be able to talk and read lips perfectly. After talking to them and reading the articles they had gave them Louise and Tom were willing to try it and take the chance. Using sign language was a success and they were able to communicate with Lynn very fast and within a week they were able to understand each other. This was a way faster progress than before. They finally decided to use sign language and Lynn’s progress got better and better and sign language because their new second language.

While reading the book I learned a lot and it made me think and wonder why they would put young children through so much struggle just because they don’t want them to use sign language. Every time I came across the comments they made about her not being a “normal child” if she didn’t learn how to speak really upset me because just because she was deaf it didn’t mean she wasn’t going to be able to do things like everyone else. It’s sad how they were never able to communicate with her and the way the struggle could have been avoided. Lynn was a bright child she learned how to read lips very quickly so I’m pretty sure if she had started to learn sign language when she was two-years old she would have picked it up quickly too.

Several incidents that happened in the story were very interesting like when Lynn was able to say “Blue” after touching her father’s chest and then hers. This I didn’t even know it was going to work but it did. When Mr. Hughes went up to talk at the meeting and was saying nothing but negative stuff about sign language it bothered me because he should want to try something that was better for his son and for him. Also when Tom was in the room with
Sandra, Mike, Jim and Alice and they were signing he felt like he was the odd ball because he couldn’t understand sign language. When they realized how hard it was for them to try and understand what they were signing to each other, and thought about how hard it must have been for Lynn to try and understand them. In the end I’m glad that Louise and Tom decided to use sign language with Lynn because it made their lives so much easier and they were finally able to understand her and communicate with her without any problems.

Deaf Like Me Book Report. (2016, Mar 01). Retrieved from https://studymoose.com/deaf-like-me-book-report-essay 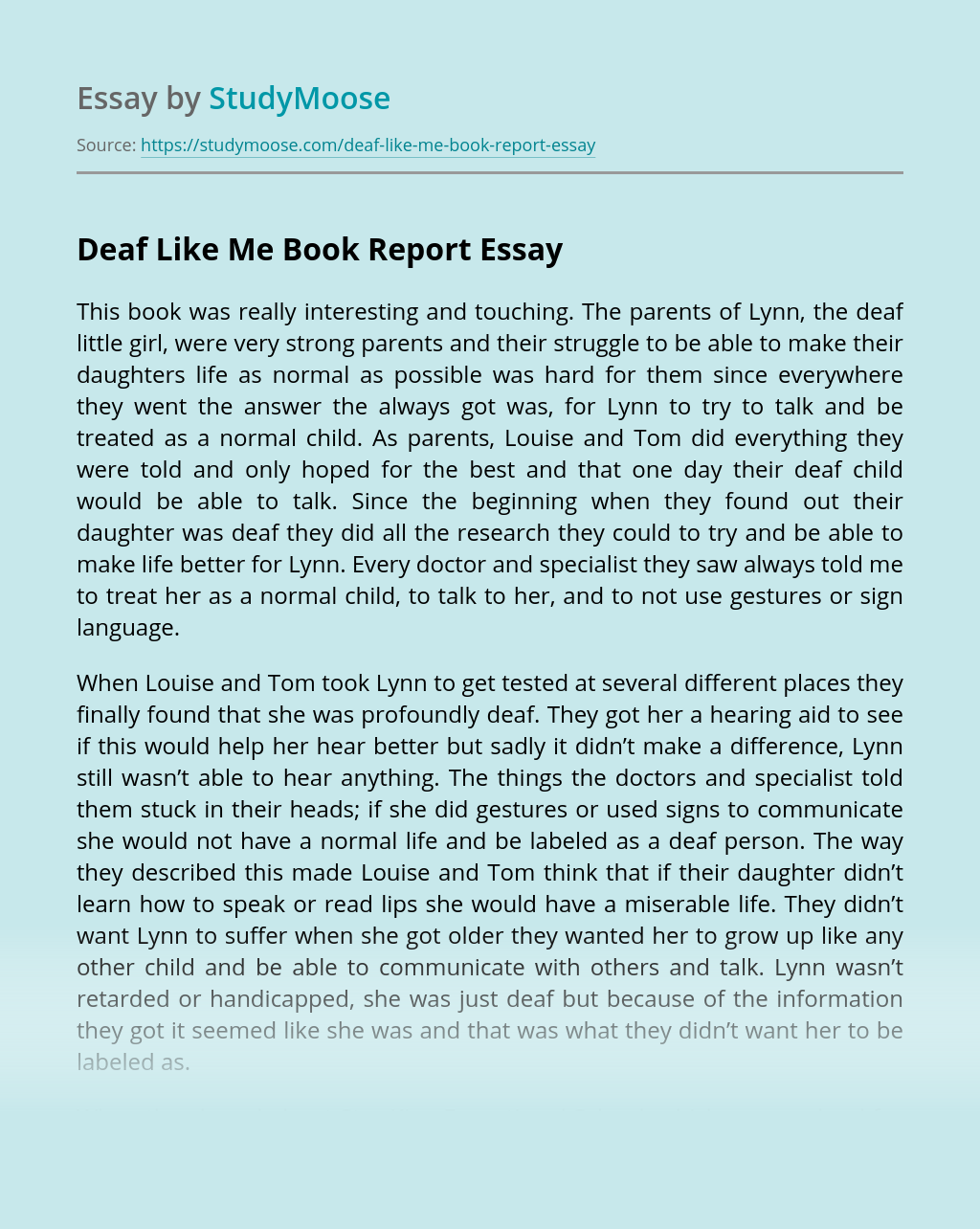 Sylvia Plath struggled throughout her life. She found a love for writing and exhibited her talent for words early on. She started school early and began writing poems at the age of five. From then on, Plath’s passion for words influenced her life greatly. In addition to writing, love was a large aspect of Plath’s... VIEW ESSAY

The definition of a hero is varied and intricate. While there are certain types of heroism such as altruistic heroism, or other machismo bravado this paper will seek to find a definition to the specific heroism as exhibited in Harper Lee’s character Atticus Finch in To Kill a Mockingbird. A discussion of the definition of... VIEW ESSAY

View sample
Get Essay
Death of a Salesman- Essay-Reflection

In Death of Salesman, the conflicts that the characters face through out in the play, can be interpreted as reflections of the problems in America’s society today. The majority, if not all of these problems can be traced back to Willy Loman as the source. Willy Loman’s longing to be successful (either actually through himself... VIEW ESSAY

The hours neared towards my very special day. I was nestled deep in comfort and warmth as I awaited the ear drumming beeps of my alarm clock. I turned to look at the digital clock and its luminous numbers covered by a thin layer of glass; it was 11:00p.m. It had only been a few... VIEW ESSAY