This paper provides an analysis of the film, “Dead Poet’s Society”, focusing on the significant experiences that resulted in life changes for the boys in the film

Significant experiences; the twists of life. Significant experiences are moments in life that create change not only in one’s present period of life, but also dramatically alter one’s view of the surrounding and forthcoming events. The impacts of such experiences are the opening of new doors in life, the realization of possibilities one would have never imagined sitting right under one’s nose and the perception of details one never thought important before.

They mostly temper peoples views of events, shedding a different hue of light upon them, revealing multiple possibilities that were once left in shadow.

In Dead Poet’s society, a handful of students discover through the exuberance of their English teacher what kinds of lives they had been leading, and what their lives could be. One student in particular, Neil Perry, discovers a whole new world and his life is irreversibly changed as a result of the impact of his association with Mr.

Keating. The lives of all the boys were drastically changed the day they met Mr. Keating. “Carpe Diem” he told them. “Seize the day, make you lives extraordinary.” With these few words, Mr. Keating opened the minds of his students to the broad possibilities that life held for them. The boys learned that they deserved more than the daily routine, that they were not satisfied with living up to the expectations of others.

As a result, they re-established the Dead Poet’s society, and consequently experienced what they had been protected from previously.

The most significant change wrought from both the arrival of Mr. Keating and the re-instatement of the Dead Poet’s Society was Neil Perry’s change in attitude. He realized what his dreams were, and to accomplish them, he had to do something he had never dared to do in the past, disregard the will of his father. Having lived under the iron rule of an oppressive father his entire life, Neil’s spirit was in danger of smothering to death. The Dead Poet’s Society and Mr. Keating reawakened Neil’s half-drowned spirit and encouraged Neil to strive towards what he thought was important, not what his father thought was important. Neil’s life was drastically changed as a result of his meeting Mr. Keating, from a life dedicated to school, to a life dedicated to living.

The impact of this association with Mr. Keating was that Neil was a different person after, he attempted to break free of the conformity that was suppressing him and his view on life became brighter and more hopeful. For Neil, the significant experience of meeting Mr. Keating also changed his outlook on the future. Instead of constantly studying and dreading disciplinary action from his father, he began to look towards the good things in life. He realized that his dream was to become an actor, and that acting gave him happiness and hope that he had never had before. Acting was Neil’s hope for the future, it let him grow and experience life’s true joys, joys that he could not have even wished for in the past. The greatest impact that Mr. Keating had on Neil was that he taught him to look past the wishes of others, to see what was really wanted out of life. Neil had been living a life created by his father, working towards goals set by his father, and growing up to be his father. After meeting Mr. Keating, Neil broke free of the bonds his father had tied around him and tore off the blinders that had restricted his view of his life. He saw things from his own point of view, acted as he wanted, not as his father expected him to.

His reaction to and perception of events that occurred after his significant experience were radically different than those of events preceding his experience. The most important decision Neil made in the entire movie, however, was the one to kill himself. This was a decision made by the new Neil, the Neil with a mind and future of his own. The old Neil would have grudgingly accepted his fate, and lived a frustrated and desperate life working towards his father’s goals. A direct result of his relationship with Mr. Keating, Neil’s suicide showed that he was in control of his life, that it was in fact, his life and he wouldn’t let anybody ruin it but himself. Neil’s suicide was both a shock and an inspiration to his peers. One of their friends had just died, but he had died for something he believed in. Neil was an inspiration not in the sense that they believed they should all shoot themselves, but in the sense that they now knew they could stand up for themselves and did not have to be afraid of the consequences.

The impact of being taught by Mr. Keating was evident in the other boys in their reaction to Neil’s death. They all had learned what life held in store for them, and they all understood that it had been Neil’s choice to do what he had done. To his peers, Neil’s death would be remembered as his way of openly defying his father, the school and everybody and anything else that had ever gotten in the way of his dreams. If Mr. Keating had not entered their lives, Neil’s friends would most likely have simply grieved for their loss of a comrade, and never thought about why it had happened. If Mr. Keating had not have entered their lives, there would not have been a reason for it to happen in the first place. Neil’s and Mr. Keating’s messages in the movie were the identical, that one has to stand up for what one believes in, and not living at all is better than living someone else’s life. “Make your life extraordinary.”

Through their connection with Mr. Keating, the boys all discovered that living up to their own expectations was both the hardest and most satisfying experience in life. Every last member of the Dead Poet’s Society was affected by Mr. Keating, and all of them will carry his advice with them for the rest of their lives. Through significant experience, one encounters change, and the impact of all this is the new path one’s life takes as a result. 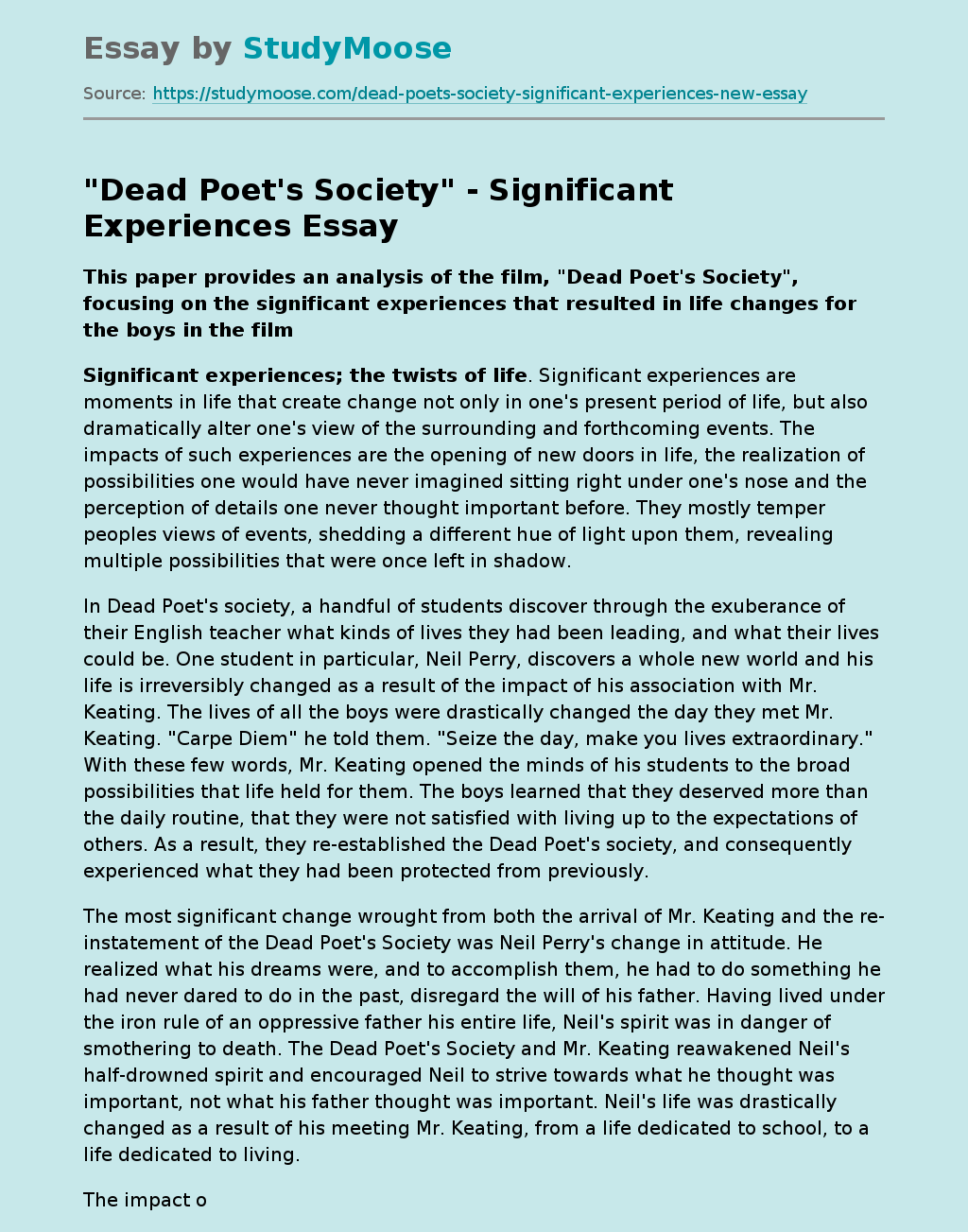