Photography shows us the world, but only the world the photographer creates. According to Sontag, photos show that we understand through a photo in the way we see the picture. Seeing photos can limit our understanding because we only see the picture not whats going on around it. In other words the viewer only sees what’s within the frame. Images allowed us to see situations that occurred; however, it is extremely limited in what the audience can see. I qualify Sontag’s claim that photography limits our understanding of the world because nothing is picture perfect.

Don't use plagiarized sources.
Get Your Custom Essay on DCQ Sontag Just from $13,9/Page

A picture is just a snapshot or quick image of something distorted.

Photography has accomplished the task of manipulation to the point where images do not exhibit the honesty. In general photography is used to trick the audience’s eyes. For example, ads are displayed every day in our lives distorting the honesty portrayed. Long ago when a cigarette commercial came on they had enhanced the color, and edited all the little details that appeals to our emotions, making cigarettes look good.

The only problem is cigarette isn’t good for anyone, but the viewers wouldn’t get that message due to the changes the photographers have made. Following this further Sontag infers that nothing that comes from a photo can really be understood. The reason for that is because photography shows everything but context. Photography gives people a small glimpse of reality, but the realities have been manipulated to the photographer’s idealism.

However as Sontag pointed out photography takes the gaps in our mental pictures and replaces them. Photograph gives proof and confirms the past, but it does not exhibit the honesty a citizen would have lived through. For example if no pictures were captured during the Holocaust time period, it would be hard for people to believe that all the torturing actually occurred. Images allowed us to get a glimpse of what the Jews went through but the feelings and emotions aren’t the same. One cannot say they truly understand how the Jews felt, without actually experiencing what the Jews did. It takes one to be there to experience the emotions and tears the Jews had as the gas killed them and family.

Sontag says understanding can only come from what is shown.. There is much more to life than what meets the eye, and this can be exemplified and proved in many different ways. Pretend that someone knows nothing about the tragic events that occurred on September 11, 2001. A photo is placed in front of Them. They take a look. It appears to be a man dressed in what appears to be in work clothes but the thing that strikes their attention first, the thing that stands out most is that he is upside down. Odd they think. The background behind the man is what looks to be a steel like structure. Maybe if their senses are sharp that day you’ll come to the conclusion that this is an image of a man who decided to end his life by jumping off the top of a tall building while in midair.

However, did the photograph show them what was going on around him? The building he jumped off of? A hijacked commercial airlines plane crashed into it leaving the building to go up in flames and ready to collapse with smoke pouring out the windows. Leaving him and at least 1,000 other people trapped on the high floors of the tower. This man, this falling man, was surrounded by absolute chaos, destruction, death, a living hell, but they would never know. He looks so calm, so serene even though he is more than well aware that his life is about to end in a matter of seconds. To the person looking at the photo they only see it as Sontag says they do. Through what they see in the picture, not what is really occurring.

To an extent, yes, photography does limit us in the view of the world like Sontag refers to. Pictures are taken by photographers who chose what they wish to express and how they wish life to appear to be. By doing this, reality has changed, becoming manipulated into something that it truly is not. It is now a reality created from the human mind, influenced by its wants, desires and emotions. Photography also fails to give us background, or deeper knowledge about the photo. Pictures lack the emotion experienced by the person taking the picture (how hard it may have been to get the picture the photographer wanted). Yet pictures can sometimes invoke an emotional response (a gruesome death, a spectacular sunset). Pictures lend to a greater understanding of what is happening around the world.

When someone sees the faces of others in places they never will travel to, they start to understand the emotion they show. Words sometimes can not do justice to the things you are able to see. Pictures only help the reader better understand his/her meaning of what is actually taking place. Yet, do not be fooled by everything you see today. Technology has taken photography to a new level. Make certain you trust your source first. The old saying “Believe only half of what you see and nothing that you hear” no longer rings true. Be skeptical, but keep your eyes and mind open at the same time. 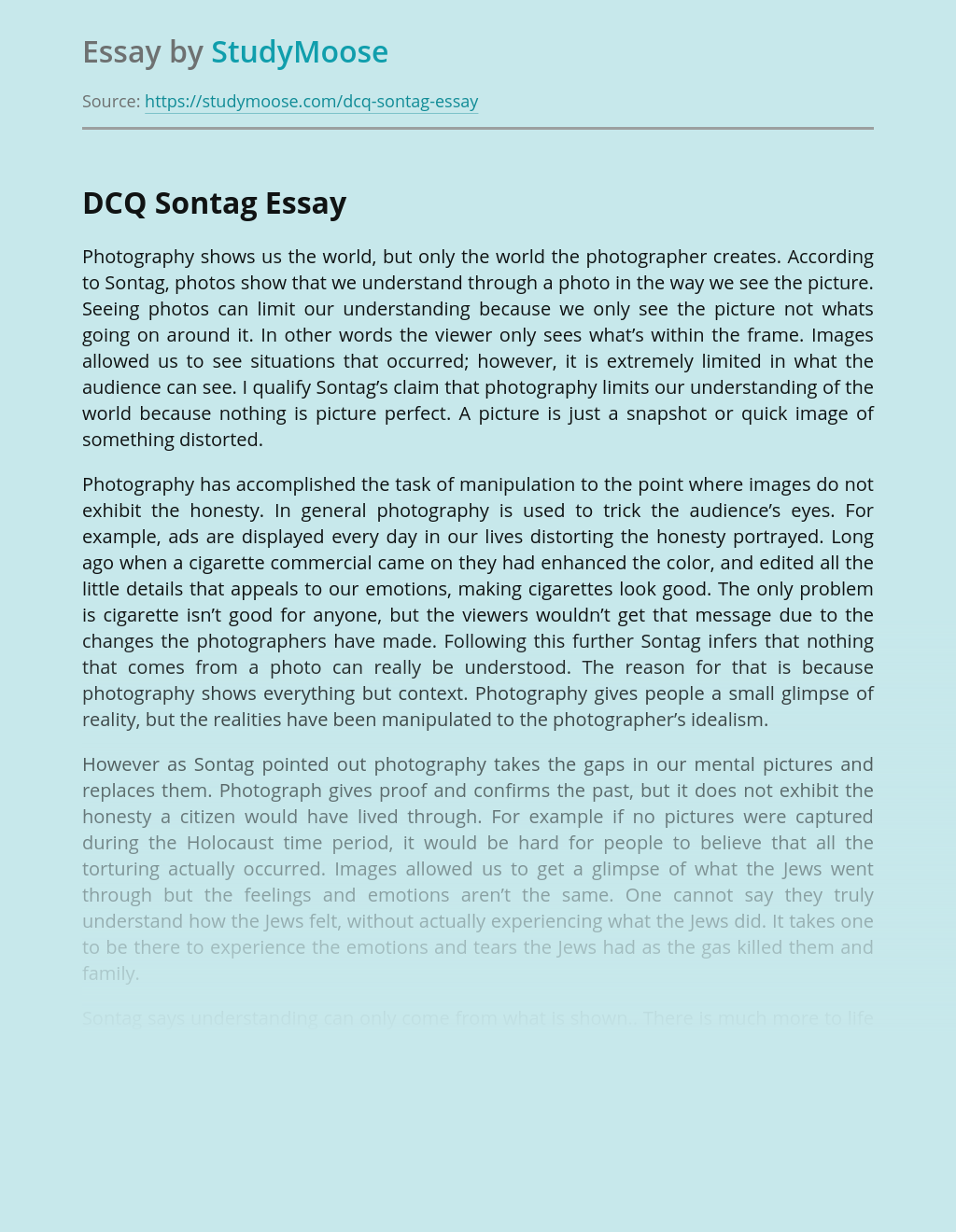 Some call it dedication, others call it psychotic. I prefer to think of obsession as a part of life. The definition of obsession which is found on The Free Dictionary is the domination of one’s thoughts or feelings by a persistent idea, image, desire, etc. Obsession can be determined by people around us. Passion is...

View sample
Describe physical, intellectual, emotional and social development for each of the life stages of an individual

The eldest of Frank and Isobel Hawking’s four children, Stephen William Hawking was born on the 300th anniversary of the death of Galileo—long a source of pride for the noted physicist—on January 8, 1942. He was born in Oxford, England, into a family of thinkers. His Scottish mother, Isobel Hawking, had earned her way into...

View sample
Get Essay
The short stories: “The Kid Nobody Could Handle”

The movie Sybil brought out several different emotions and reactions personally for me. The story line follows a young woman’s struggle with personality disorder; the cause and effects of her disease throughout her life, and the process of her repressed memories finally coming to the surface. Although I wouldn’t say that the disorders that Sybil...

View sample
Mother Teresa: her life and my feelings