DBQ: What caused the Dust Bowl?

In the 1930’s many people were devastated by vast dust storms. Many people suffered from them in Kansas, Colorado, New Mexico, Oklahoma, and Texas and some people even died. In the fiction book Out of the Dust, an Oklahoma girl named Billie Jo tells her story on how she survives the Dust Bowl with the loss of her mother. Billie Jo also describes the pain she is going through having her beloved piano destroyed by a dust storm. Lots of people think differently on how the Dust Bowl was caused but I believe it was caused by overproduction, lack of rainfall, and dust storms.

Turn in your highest-quality paper
Get a qualified writer to help you with
“ DBQ: What caused the Dust Bowl? ”
Get high-quality paper
NEW! AI matching with writer

Proficient in: The Dust Bowl

With over billions of acres of land taken up by crops, that leaves less space to irrigate the land and to allow moisture to enter the soil. Therefore, resulting in arid fields.

In the 1930‘s there was huge drought in the Great Plains. A decreased amount of precipitation was another main cause of the Dust Bowl. Without precipitation, it is very hard to grow crops. The Great Plains already has a semi-arid climate and without the much need rain, this area turned into a “bowl” of dust.

The average precipitation according to John Wesley Powell is 20 inches of rain annually (doc E). As the years pass, the annual rainfall for Dallam County, Texas jumps around (doc E). Sometimes getting as low as 9.78 inches a year (doc E)! I think this problem was a result of the overproduction. You see, without enough space to let the water irrigate, there will be no way for the water to evaporate out of the ground to continue on with the water cycle. The outcome of this is that the soil becomes parched and it turns into dust.

Dust storms are high winds which carry clouds of dust, soil and sand over a large area. In the southern plains, many people suffered from diseases from these clouds of dust. In Nate White’s story of the Dust Bowl, he said that as soon as he walked outside, it was as if somebody had blindfolded him (doc A). He said he had bumped into telephone poles, skinned his shins on boxes and cans in the alleyway, and he fell on his knees and crawled to a dim house light (doc A) because the dust was so thick, he was unable to see.

These storms where so bad that many people thought it was the end of the world (doc A). These people thought the world was ending because the dust storms occurred year after year (doc A). During the storms, dust rattled against windows and fine powder caked peoples lips. The Dst Bowl got its name because many of the worst storms occured in the Great Plains area in Kansas, Colorado, New Mexico, and the panhandles of Texas and Oklahoma.

DBQ: What caused the Dust Bowl?. (2016, Dec 29). Retrieved from https://studymoose.com/dbq-what-caused-the-dust-bowl-essay 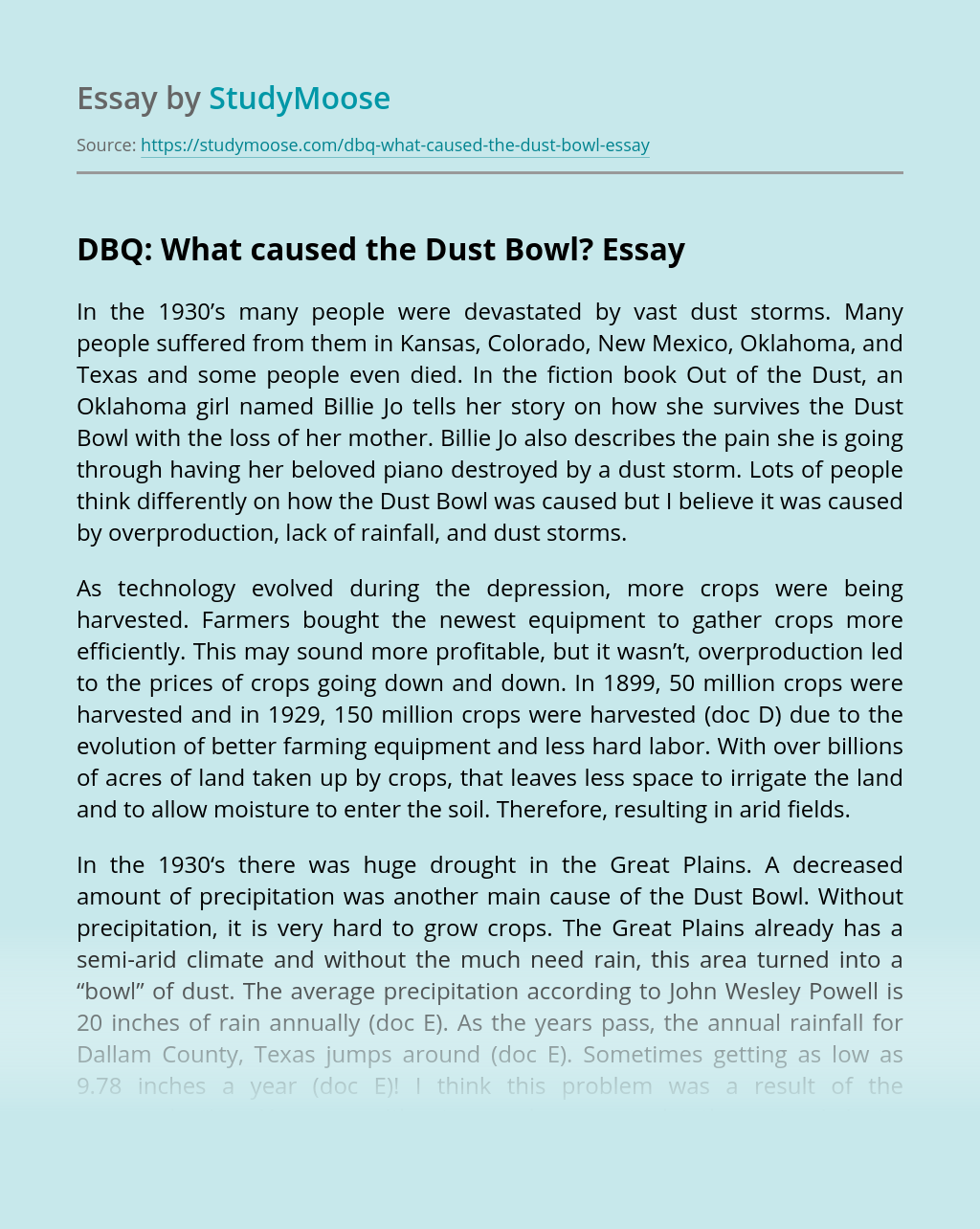 Turn in your highest-quality paper
Get a qualified writer to help you with
“ DBQ: What caused the Dust Bowl? ”
Get high-quality paper
Helping students since 2015
Stay Safe, Stay Original