The Enlightenment known by many as the Age of Reason was a turning point in history. Man people believe that without the Enlightenment, many of the laws, and rules would exist. For example the United States Declaration of Independence and the Constitution were greatly influenced by the Enlightenment. For example, John Locke, an Enlightenment thinker highly influenced the Declaration of Independence by stating that the natural rights of people include life, liberty and property except the founding fathers changed it by stating life, liberty, and the pursuit of happiness.

Don't use plagiarized sources. Get your custom essay on
“ DBQ: The Enlightenment ”
Get custom paper
NEW! smart matching with writer

The American Revolution itself has been called the embodiment of Enlightenment ideas. If the founding fathers were not influenced by some of these ideas, maybe the United Sates would not be a democracy; it could have been an absolute monarchy, aristocracy, etc. Some of our human rights would not exist if it were for the Enlightenment. Philosophers such as Montesquieu, Rousseau, Locke, and others lead to many great changes. These ideas were used by some to challenge absolute monarchies.

An absolute monarchy is a government ruled by one ruler. These ideas also impacted both government and society. Some of the ideas of the Enlightenment were used to challenge absolute monarchy. One example is given in Document # 1, Montesquieu who was a French philosopher during the Enlightenment, states, “There can be no liberty with the executive, legislative, and judicial powers are united in one person or body it a persons, because such concentration is bound to result in arbitrary despotism.

In this statement, Montesquieu is stating that liberty cannot exist where three powers of government are held by one person or body of persons.

This is because then the people would not have rights for themselves. The idea was used to challenge an absolute monarchy the people thought that it was unfair that one person was ruling the state where as they wanted that people have a say in the government and everyone should have equal rights. Another idea used to challenge an absolute monarchy was in Document # 2.

Voltaire, who was a French author and philosopher, states “…I may disapprove of what you say, but I will defend to the death your right to say it… The best government seems to be that in which all ranks of men are equally protected by the laws…” This statement challenged absolute monarchies because Voltaire believed that freedom of speech should be a right for each person. He believed that people should be able to express their thoughts and feelings. Freedom of speech is a very important right today, and it is used every day by people who express their thoughts.

Also in Document # 3 Jean-Jacques Rousseau, who was a French philosopher states “Man is born free; and everywhere he is in chains. ” Rousseau is saying that despite the fact that man is born free, he is still tortures, still abused and has all of those free liberties taken away from him. For example, even though people in France prior to the revolution were all human, only the third estate had to pay taxes. The Enlightenment also had a large impact on both government and society.

For example in Document # 5 English philosopher Locke states “Man being… by nature all free, equal, and independent no one can be… subjected to the political power of another without his own consent… To protect natural rights governments are established… Since man hope to preserve their property by establishing a government, they will not want the government to destroy the objectives. When legislators try to destroy or take away the property of people, or try to reduce them to slavery, they put themselves in to a state of war with the people who can refuse to obey the laws.

Another example of an impact on both government and society is shown in Document # 6, an excerpt from the Declaration of Independence. It states, “We hold these truths to be self-evident, that all men are created equal, that they are endowed by their Creator with certain unalienable Rights, that among these are Life, Liberty and the pursuit of Happiness. –That to secure these rights, Governments are instituted among

Men, deriving their just powers from the consent of the governed, –That whenever any Form of Government becomes destructive of these ends, it is the Right of the People to alter or to abolish it, and to institute new Government, laying its foundation on such principles and organizing its powers in such form, as to them shall seem most likely to effect their Safety and Happiness. ” This excerpt impacts government because it states that certain rights is unalienable, meaning that they cannot be taken away from you; these include life, liberty, and the pursuit of happiness.

The impact of the Enlightenment had an effect on government because before the Enlightenment governments of Europe were primarily Divine Right Monarchies, meaning a King ruled, who was selected by God. Prior to the Enlightenment people believed that if you disobeyed the King, you disobeyed God. There was no difference between the State and the Church because each State had its own religion. No one had rights; there were no checks and balances or separation of powers because only one person was in control. The upper classes had the rights causing the lower classes to be angry.

Many of the ideas created by the philosophers during the Enlightenment led to many revolutions and greatly influenced many countries including the United States of America. Also these ideas led people to question and rebel for rights that they are entitled to. Some of these include freedom of speech, and equality. If the ideas of the Enlightenment were not important, many countries including the United States could have been an absolute monarchy, aristocracy, or another type of government where all citizens are not equal. 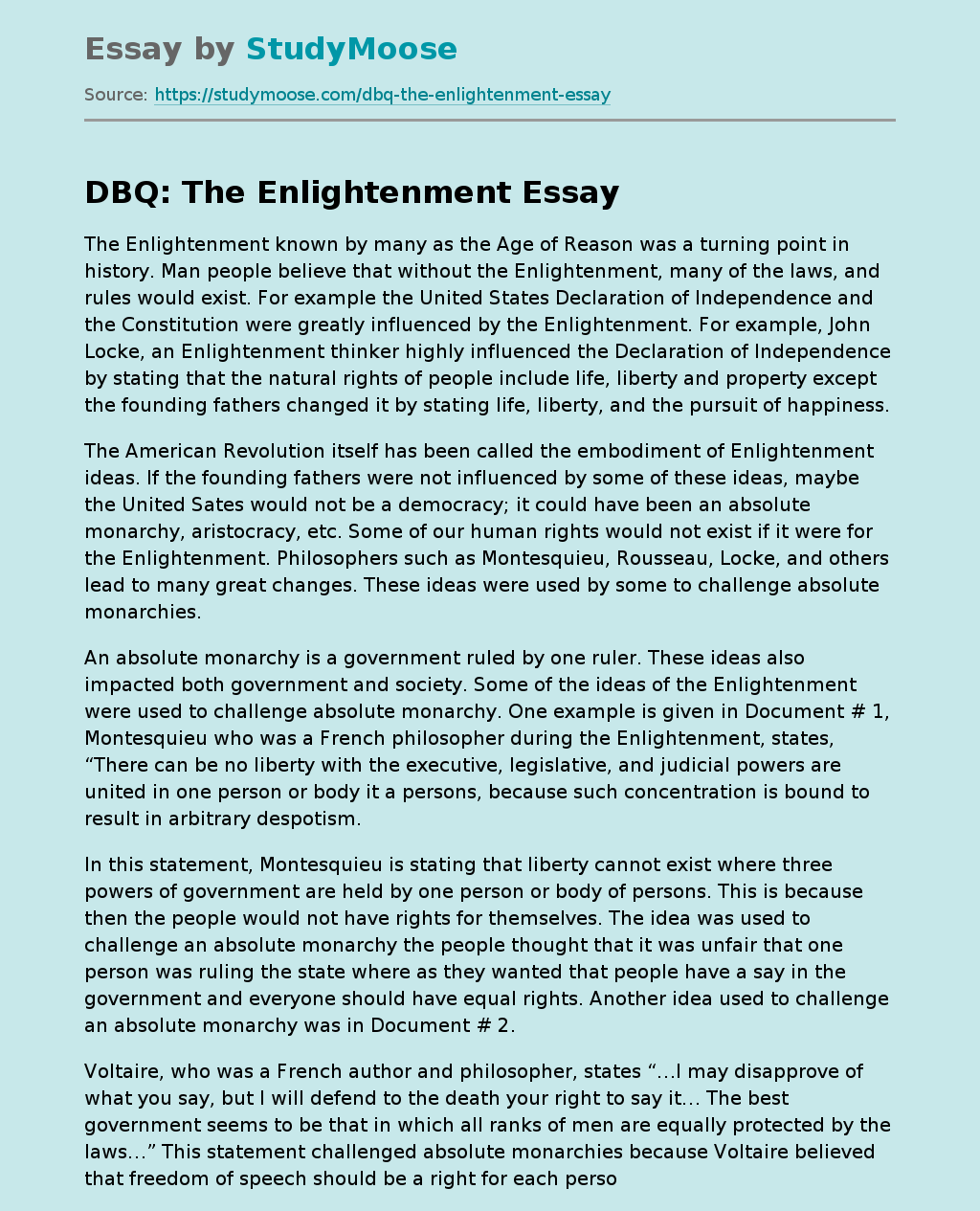