Dbq on the Medical Field During the 18th Century

The medical field during the eighteenth century was comprised of unsanitary, heinous, and uncustomary practices, such as blood letting, trepanation, and the overcrowding of hospitals. Even though these practices didn’t help in the development of the medical field, there were auspicious practices that were beneficial, such as midwifery, ingrafting, and faith in God. Midwifery, during the 1700’s, was one of the most womanized practices of the century.

To get the help of a male midwife was a belittlement to the female midwife and it was also a way of disparaging midwifery (Document 2).

Don't use plagiarized sources. Get your custom essay on
“ Dbq on the Medical Field During the 18th Century ”
Get custom paper
NEW! smart matching with writer

Also, midwives were expected to obtain the knowledge of caring for and to the skills for the well-being of women in labor(Document 2). While the conditions of a woman giving birth improved dramatically, so did the reputation of midwifery. Ingrafting was one of the most cogent inventions in medicine in the eighteenth century. Diseases as contagious and fatal as the smallpox were almost eliminated with the invention of ingrafting (Document 3).

This procedure was so advantageous that Lady Montagu, an English writer, was “well satisfied of the safety of the experiment,” that she intended to try it on her own son (Document 3). Ingrafting has also evolved into vaccines that now can cure and treat malignant ailments like the flu and cowpox. Faith in God was a way for people to have mental support for their ailments, even though it didn’t cure or treat any ailment, people still turned to God for aspiration. Many people still believe in the power of prayer and in the power of faith to relieve them of illnesses.

This is best stated by William Buchan, an Edinburgh physician, because his statement that the Christian religion teach that, “the sufferings of this life are designed to prepare us for a future state of happiness. ”(Document 7) Medical practices, such as midwifery, ingrafting, and faith in God, of the eighteenth century not only advanced to the benefit of the overall health of the people, but also led to the more advanced practices used today. Although these practices were basic, they are the vital parts of the development of medicine.

Dbq on the Medical Field During the 18th Century. (2018, Sep 28). Retrieved from https://studymoose.com/dbq-on-the-medical-field-during-the-18th-century-essay 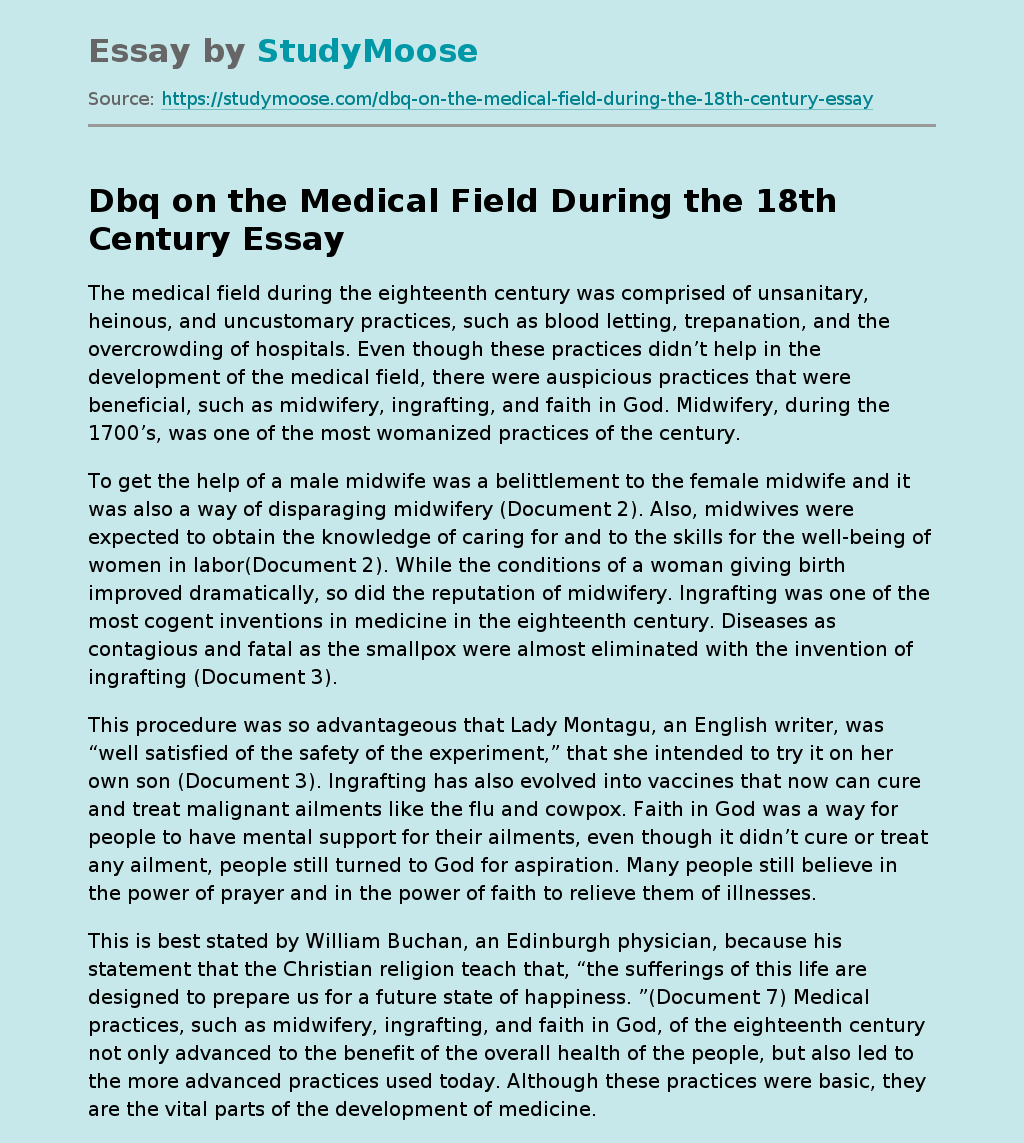