Davy did many thing through out his childhood all the way up to his adulthood. Davy was born in Tennessee on August 17, 1786 . John crockett (davy’s father) sent Davy to work for a man who was taking a herd of cattle to Virginia at age 12. Davy helped the man drive cattle for over 200 miles from Tennessee to Virginia. The trip was a little over 2 weeks, and then Davy finely returned home. Soon after, the man Wanted Davy to keep working for him.

Don't use plagiarized sources. Get your custom essay on
“ Davy Crockett ”
Get custom paper
NEW! smart matching with writer

Davy was homesick but he still said yes. About one month later Davy could not stand being away from his family.

So he ran away from the mans house and headed home. At age 13 Davy set out on his own, and learned to become one of the worlds greatest/and craftiest backwoodsman around. Legend says that Davy was friends with a bear and could get a raccoon to come down from a tree by just grinning at it . At age 16 Davy moved back to Tennessee with his family.

In 1811 Davy’s family moved to Tennessee. They made there home near what is now the border of Alabama. By 1813 the white men had made the native Americans very made.

This started a war. Davy helped the creeks fight against the white men. When Davy got back from the creek war, Polly gave birth to a daughter. Polly died in the summer of 1815. In 1816 Davy married Elizabeth Patton to care for his two children, let alone her own three children.

In 1816 Davy almost died of malaria, and in 1818 Davy becomes a “court referee” in Lawrence country, Tennessee. In 1821 David Crockett was elected to the state legislature at age 35. In 1827 David Crockett was elected to the House of Representatives in Congress. David Crockett served in congress from 1827-1831, and then he served in Congress again from 1833- 1835. when he was in Congress he often made speeches and told many of his adventures. Books came out filled with information and stories about Davy’s life. They even made a lay about Davy called the lion of the west in 1831. David Crockett and a congressman Thomas Chilton wrote a book about Davy’s life. Davy was a legend while he was still living, and still is a legend to this very day. in 1835 David Crockett moved to Texas. Texas was not a state when Davy moved there. Davy was now 49 years old and he wanted to explore the frontier . Davy joined the Texas army. David fought in the Texas revolution in 1836. the Texas Revolution was over a Mexican government that ruled Texas. The people who lived in Texas wanted to be free from the Mexicans. 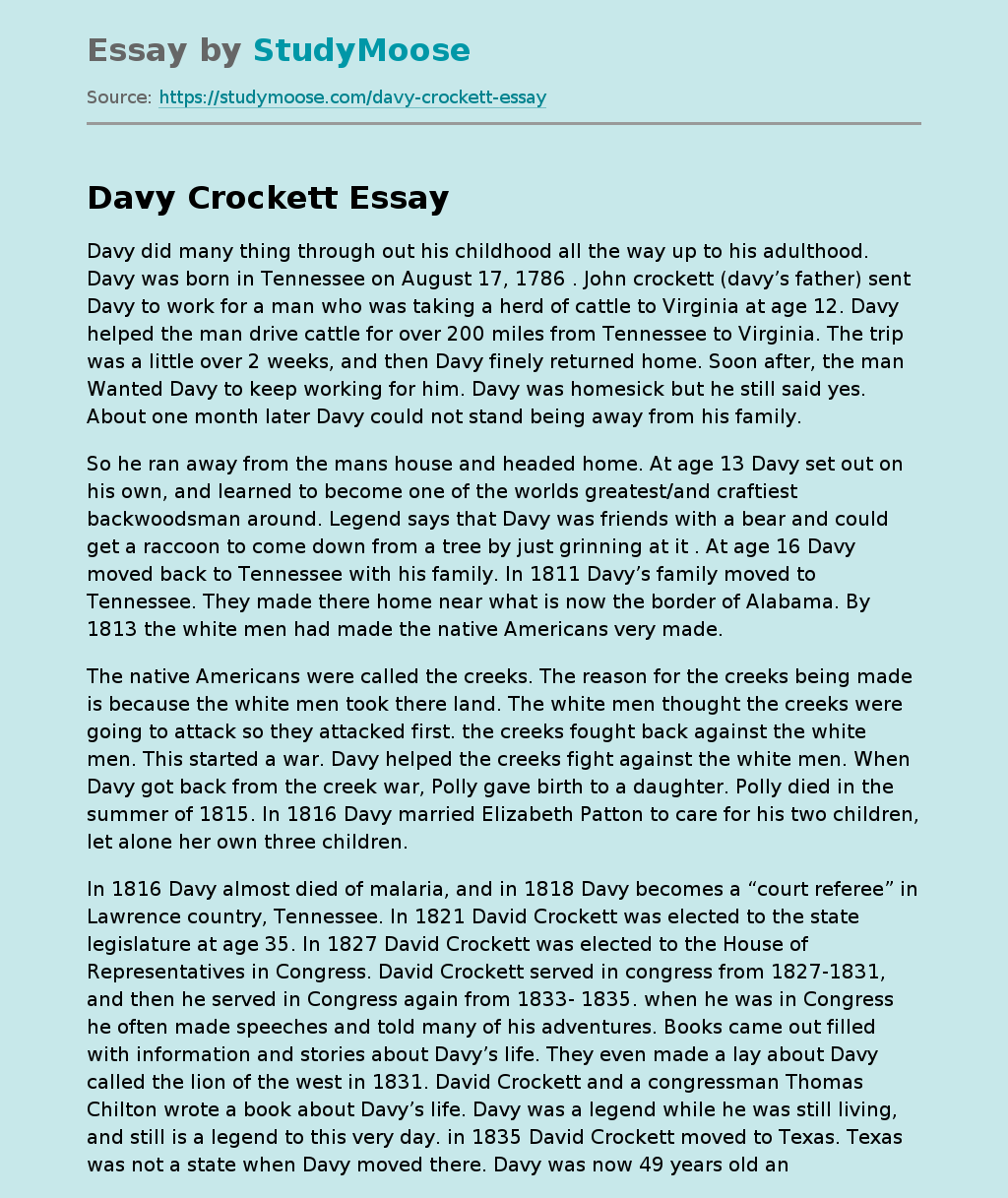