David Ricardo, a 17 century English political economist, is considered an extremelyinfluential classical economist along with Adam Smith and Thomas Malthus. Ricardo was bornon the 27th April 1772 and helped develop key economic theories until his death on the 11thSeptember 1823 1. Ricardo grew up in a dominate English family where his father was also aneconomist, Ricardo credits his father and the reading of Adam Smith’s book The Wealth ofNations for his interest of the social science, economics2.

Ricardo did not reach immediate fame,in fact it quite the opposite.

It was not until age 37 when Ricardo first published his views oneconomics, after he reached the milestone of publishing his first article he continued to work anddeveloped his theories, it was ten years later, at the age 47 when most say Ricardo reached hispeak of fame. While developing economic theories Ricardo worked on the Stock Exchange inLondon, this increased his wealth, by the time he was 42 he was completely retired from theexchange and his sole focus was surrounding economic 3.

In the remainder of this essay I willexamen some of Ricardo’s economic theories with a focus on the law of diminishing returns.

David Ricardo is responsible for the creation as well as the development of a number ofkey economic theories which allowed past and current economist to better understand todaysever changing economy. The three accomplishments that Ricardo has received most credit for arethe labor theory of value, the law of diminishing return as well as the Barro Ricardo equivalence4. The labor theory of values are a set of theories that suggests that the value of any good orservice is equal to the amount of labor that was put in to the good or service either directly orindirectly to produce it.

The labor theories of value were furthered developed by Ricardo as wellas fellow classical economists including Adam Smith, the Labor theory of value is not commonlyused in current times and instead it has been replaced with the marginal utility approach.

Ricardo was an economist who was responsible for the development of the law ofdiminishing return. Ricardo developed this theory with other classical economists of his timewhich some of the most notable being Johann Heinrich von Thünen, Turgot and finally ThomasMalthus. The idea was first developed by Ricardo when he used the example of agricultureproducts to demonstrate his ideas into a working theory. All Ricardo, von Thünen, Turgot andMalthus lived in a time where land was a valuable, scares and needed.

This helped this group ofeconomists develop the law of diminishing return because these economists were worries that asland was in diminishing supply this factor of production would run out and cause diminishingreturns. In order for firms to continue to grow their product they must move to location to a lessfertile location which boasts poor soil, this will lead to the agriculture firm needing to put moremoney into growth steroids for the product or good they grow. This over time with out questionwill diminish the returns received. This is how the theory that is still in place and consideredvaluable today was founded and developed by several key classical economists includingRicardo, von Thünen, Turgot and Malthus.

I will now demonstrate the idea of the law of diminishing return in a example of a t-shirtproducing firm. If a shirt producing firm was to start off with one worker who can produce ten t-shirts in a hour the this workers marginal benefit would be ten. If the owner of the firm decide hewanted to increase his workforce to two workers. When the owner does this he finds that withtwo employees their output grows to a combined 25 t-shirts per hour, this gives he new employeea marginal benefit of 15. This pattern will continue until a number is met that can not keep upwith fixed variables of production. In this case we will say that the fixed factors of productionwill allow for up to three workers to be employed and be able to grow at a increasing rate. Withthree workers the group will be able to produce up to 45 t-shirts in an hour, giving the thirdworker a marginal benefit of 20. As the fixed factors of production will only be able to handlethree workers and work up to full potential.

The next worker that is added will not increase theoutput at the same level as the others would as the fixed factors of production will not be able tohandle the work load to a maximum level. The now team of 4 would be only able to make a totalof 60 t- shirts effectively rendering the fourth employes marginal benefit to be 15. The fifth willbe added, 70 t-shirts will me made in an hour and the marginal benefit will become 10 as there isa 10 unit increase in the product from when there were five workers.

This downgrade willcontinue until to many workers are employed and the additional workers are have negativemarginal benefits. This is an example of what will happen once a sixth worker is added. Whenthe sixth worker is added there will be an output of 60 shirts in an hour giving the sixth workeran marginal benefit of negative 10. This is when a firm will be operating at a loss as they will bepaying an extra employee money to decrease the total output of the firm. This can be changed byletting on of the six workers go as they will then be making more out and paying less employeesthis equals more money for the firm to spend as they feel needed. This same idea can be seen inappendix I.

For the steak holders and management of the firm the law of diminishing returns is aninvaluable resource that is used to maximize productivity of a firm. As perviously mentioned inthis paper the law of diminishing returns is a theory that was set in place so that firms, large orsmall will be able to maximize production as well as income. This will keep the firm is businessfor time to come as well as allow it to grow substantially with out hurting its feature. This willalso allow the firm owners to become more wealthy and this will give the owners andmanagement the option of using this extra income to improve the firms factors of production.

In conclusion, the law of diminishing returns is a resource that is valuable to firmsby allowing them to ensure they are working at maximum efficiency. The law of diminishingreturns is a simple yet vital theory and concept for people to understand. The basis of firms canbe built upon the law of diminishing returns and can be extremely valuable. With out such a lawor theory firms would be lost and unable to produce goods at the same rate of productively asthey do with such a law. In all this law is one that must be understood for those looking tomanage and operate a effective firm in order for the firm to stay a completive business. 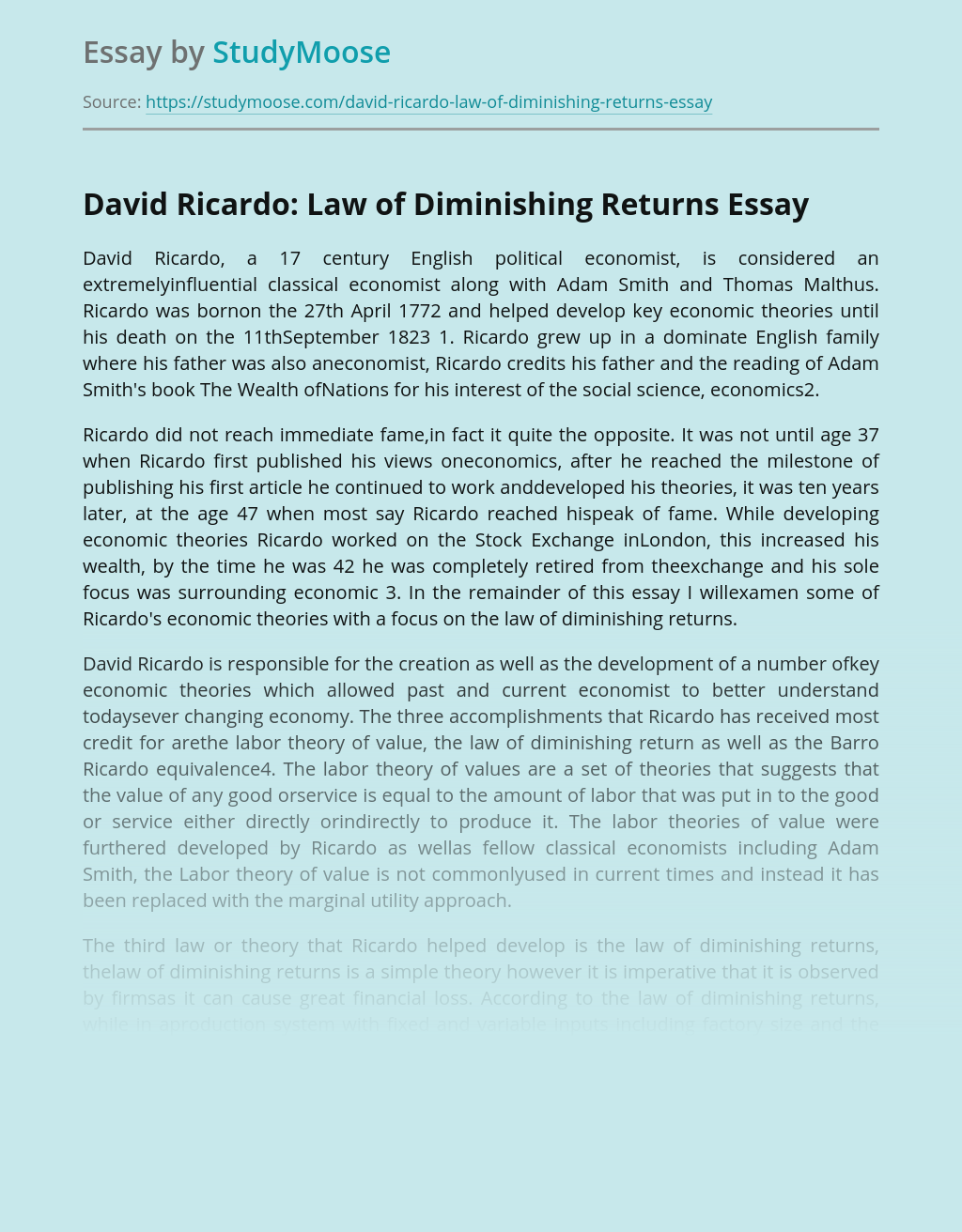