Dark Side of Chocolate

1. The systemic ethical issue raised by this case begins with the economic state of the Ivory Coast. The prices of cocoa beans have decreased quite significantly leading the farmers to cut down their labor costs. In doing so, the farmers have been left with no choice but to turn to child slavery in order to make a living and profit out of their farms. Also, in the legal aspect, child slavery in the Ivory Coast is illegal; however, they do not enforce that law whatsoever, ultimately leading to systemic ethical issues.

Don't use plagiarized sources.
Get Your Custom Essay on Dark Side of Chocolate Just from $13,9/Page

The individual ethical issues raised by this case are the farmers themselves that force children to work on their farms just so they can cut their labor costs and make more money for themselves.

Also the traffickers that go out and steal the young children are at fault too. In addition to the farmers and traffickers, the presidents of the chocolate companies are also at fault since they seem to ignore all the allegations about their companies participating in child slavery in one form or another. 4. This incident shows being ethical is not enough for businesspeople to follow the law. The companies claim to be ethical and against child slavery yet they still support the complete opposite just because it is not the law.

In my opinion a company like Hershey should be held accountable for their supply chain because they have the power to change unethical behavior. For instance if Hershey actually cared about the child slavery issue and wanted to do something about it and change the way the farms operate then they can join forces with their fellow chocolate companies and demand that child slavery be stopped on the farms or they will no longer purchase their chocolate from there. The Ivory Coast cocoa industry would be devastated in such a thing was to occur thus leading to no more child slavery.

Dark Side of Chocolate. (2017, Mar 24). Retrieved from https://studymoose.com/dark-side-of-chocolate-essay 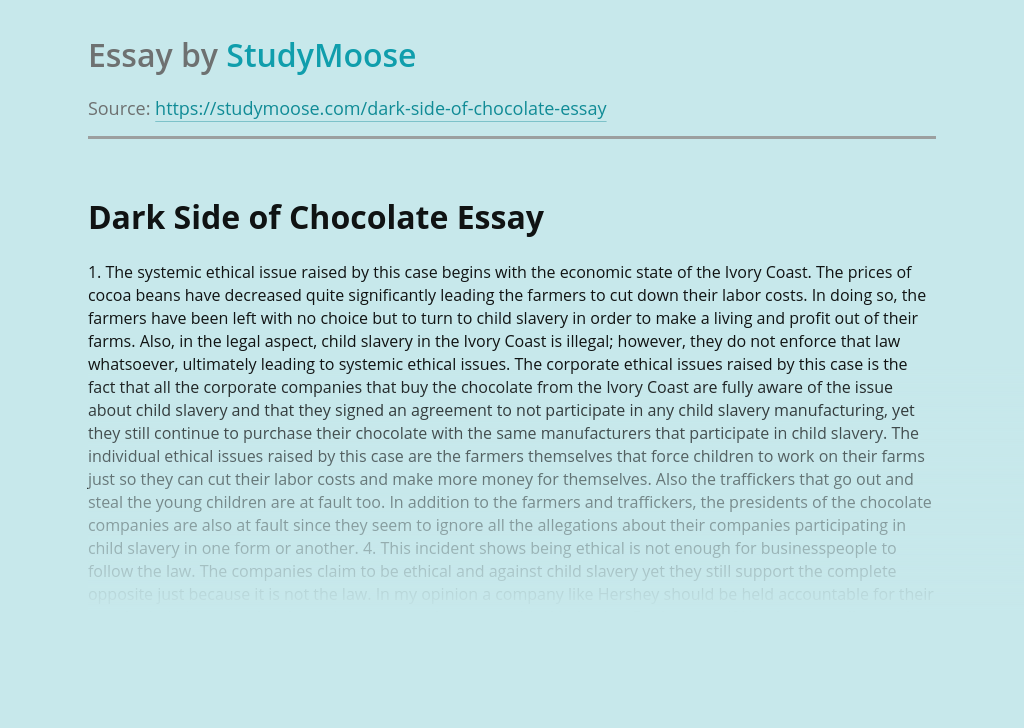 The Two Parts of To Kill a Mockingbird

Rate this post When an author divides a novel into two separate parts he or she does it purposely to show either a large dynamic change in a character or little to no change at all. Harper Lee, author of the novel To Kill a Mockingbird, separates her novel into Part I and Part II....

My Use of Office Equipment at the Workplace

Rate this post Gives you a home screen that gives you short cuts and easier access to systems and files on the computer. Franking machine- Gives you the option to select the type of letter and the class you want to send it. 1.3 Explain why different types of equipment are chosen for task. Different...

Rate this post Which act of Macbeth contains the falling action? Act 1 Act 2 Act 3 Act 4 Act 5 Act 4 Which plot element is the turning point in the conflict? Exposition Falling Action Climax Resolution Points earned on this question: 5 Climax Which of these lines provides important information for the rising...

Physics Lab Report on Lightbulb as a Resistor

Rate this post Concept The main concept in this lab report was to analyze whether or not a lightbulb acted as a resistor. A resistor is any material that reduces or limits the amount of electrical charge that flows past a certain part of the circuit. How well a substance limits this flow is the...

Rate this post What is a cake pop? A cake pop is much like a cake, however it is smaller and on a stick! Cakes pops are small desserts that can be consumed on the go, which can be convenient for everybody. I am going to teach you step by action on how to make...