Don't use plagiarized sources. Get your custom essay on
“ Dangers on College Campuses ”
Get custom paper
NEW! smart matching with writer

Rape culture is, a culture in which rape is rampant, yet it is excused by the people and media within that culture. In an article titled Rape Culture Is Normalized across College Campuses, Jordan writes “It is exemplified in the blatant objectification and sexualization of the female body, lack of regard for a victim’s human rights, the romanticism of rape in the media and dehumanization of victims of sexual assault” (Jordan 2017). This shows that not only has the media glamourized sexual assault but those who commit these crimes have a lack of human decency for the victim.

In a journal titled, Sexual Assault on College Campuses: Substance Use, Victim Status Awareness, and Barriers to Reporting, Schwarz finds “this social norm has implications that can perpetuate sexual assault, as it falsely places responsibility on victims and lessens accountability for perpetrators, which can impact the prevalence of sexual assault, as well as, the likelihood of reporting” (Schwarz 46). With the lack of reporting, it makes you wonder why have most of these gone unnoticed. Most victims of rape or sexual assault do not report it to authorities, due to the fact, that not only is it something now accepted but, that they think it is not a serious enough crime to report. In Schwarz’s article, she touches on Adefolalu, Sinozich and Langton’s research that finds, “threats from those accused of the crime, along with a growing realization of the toll it would take to follow through with an investigation, are causing these victims of sexual assault to recant their accusations” (Schwarz 47). The sad truth is that most victims of sexual assault, their cries go un-heard or even recant their accusations due to these stated reasons. Her article also touches on Lonsway’s research that says, “the recants of these crimes contribute to the disbelief of rape culture, even though research shows that less than two percent of reports are filed falsely” (Schwarz 47). A small percentage of accusations are falsely filed, yet often times accusations are recanted due to the ridicule and stress that is put on the victim. In Jack Lasky’s book Sexual Assault on Campus, he touches on Charleswell’s article that states:

Beyond the act of physical and sexual violence, posttraumatic rape syndrome, as well as the refusal of many rape victims to report when they have been assaulted, can be attributed to a prevailing rape culture on America’s college campuses. Rape culture is a term used to describe the way rape, sexual violence, and sexual abuse are linked to the culture of society. Essentially sexual violence and speech against women is normalized and excused in media and pop culture. Thus, male sexual aggression is in a number of ways encouraged and supported in society (38).

Not only do victims have to go through an awful experience once, but they relive it all over again provided through the rape culture we have as a society today. In Sexual Assault on Campus, Lasky also touches on King’s viewpoint that argues, “rape culture is the root of the campus sexual assault problem, and the only way to effectively correct the campus sexual assault crisis is to address the underlying cultural issues from which it arises; in which she moves to establish coed fraternities to foster sexual equality” (Lasky 35). Rape culture is what is keeping sexual assault prevalent on college campuses, campuses are allowing this “rape culture” to become a new accepted part of the college experience.

Have you ever considered the differences in thought processes, between men and women, who are preparing to attend college? While most males go to a university not giving a care in the world, most women go to college with the thought of “Am I safe?”, “Be aware of your surroundings”, “don’t get too drunk at a party” etc. In a research report written for the U.S. Department of Justice, Cullen finds research that states:

Consistent across the models, it was found that four main factors consistently increased the risk of sexual victimization: (1) frequently drinking enough to get drunk, (2) being unmarried, (3) having been a victim of a sexual assault before the start of the current school year, and (4) living on campus (for on-campus victimization only) (Cullen, 23).

With rape culture being a hot topic on college campuses, most college students are not educated or aware of this problem and often times there is no information provided by the college for incoming students. The blame is transferred to the victim, who has been sexually assaulted, which then leads to the lack of reporting. In her article, Schwarz points to Aronowitz’s research, which finds that over forty percent of college students believed that a woman was responsible for being raped if she was intoxicated at the time of the assault (Schwarz 46). Due to this, most victims do not report these assaults to law enforcement, but will sometimes confide in a friend, due to the victim blaming and shaming. In Schwarz’s article, she touches on the 2014 National Crime Victimization Survey done by Truman and Langton, and Rubenfeld, Sinozich and Langton, which found an “estimated that fewer than 35% of U. S. sexual assaults occurring in 2013 were reported to police, while on college campuses, less than 5% of assaults are reported to authorities” (Schwarz 45). This is a very small percentage of assaults reported, while there are more than enough attempted or completed sexual assaults. Rennison, a Bureau of Justice Statistician found in research that:

Victims have a plethora of reasons to not report a rape or sexual assault to law enforcement, most of them referring to, that there is an accepted rape culture on college campuses, and sexual assault is now the social norm.

Women are not the only victims of sexual assault and rape, but males fall in the pool of those victimized as well. 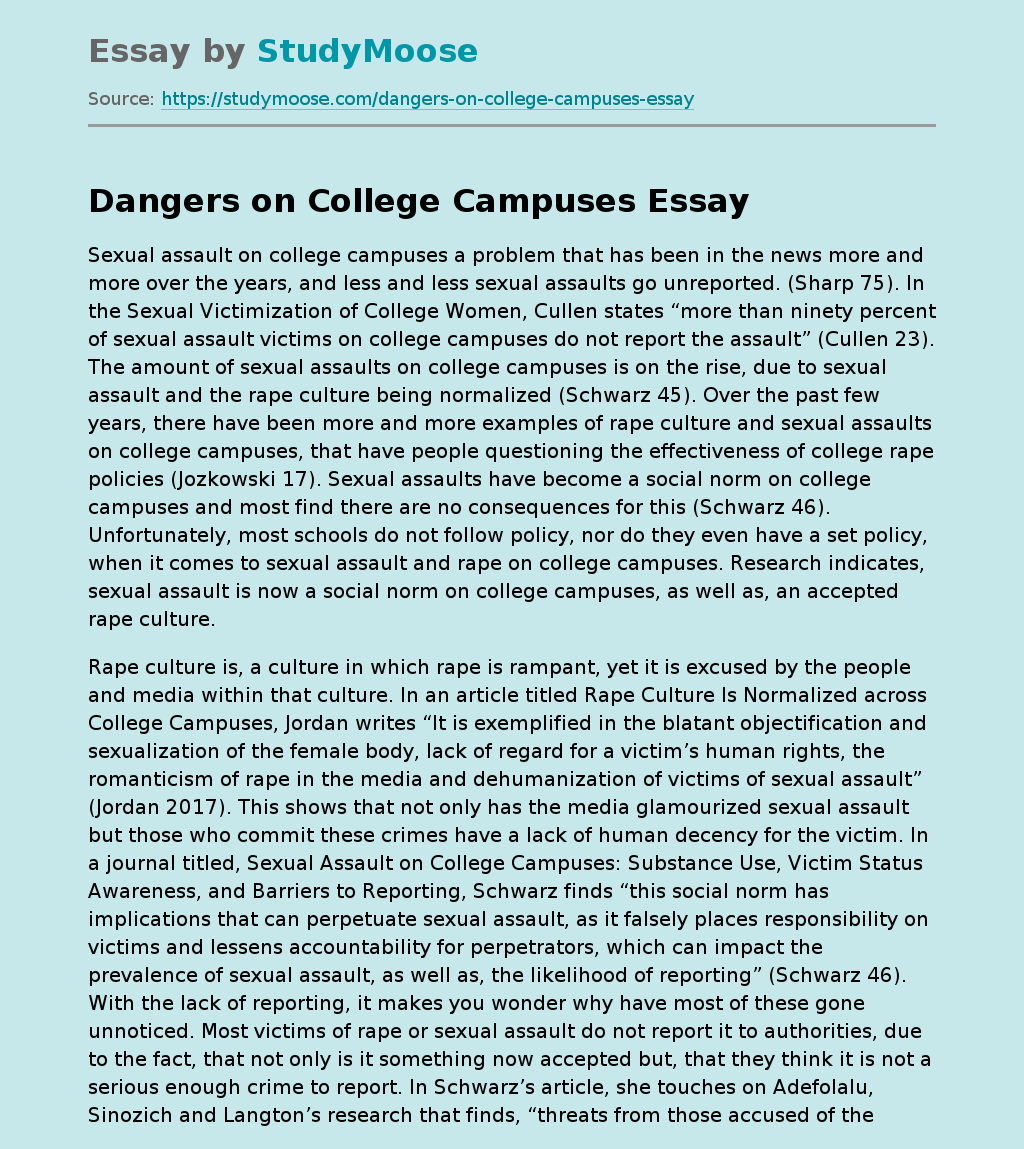