What are gender stereotypes? They are “simplistic generalizations about the gender attributes, differences, and roles of individuals and/or groups. Stereotypes can be positive or negative, but they rarely communicate accurate information about others. When people automatically apply gender assumptions to others regardless of evidence to the contrary, they are perpetuating gender stereotyping. Many people recognize the dangers of gender stereotyping, yet continue to make these types of generalizations.

” You probably hear a gender stereotype on a daily basis but probably don’t realize it because it’s so common and casual now for people to just through everyone into a category and just assume they all are the same.

Don't use plagiarized sources. Get your custom essay on
“ Dangers of Gender Stereotypes ”
Get custom paper
NEW! smart matching with writer

Which is quite sad to me. You shouldn’t be judged and characterized based on your gender. Just because one female or male does something everyone in their gender should be assumed does it to? NO.

Some examples of gender stereotypes are “cooking and cleaning are a women’s job” “woman can’t drive or park for anything” “all men are pigs”… you get the point it’s a group of people (usually either women or men) that are grouped into a title that’s so bias! Ugh I get so mad even talking about it I hate stereotypes! THE IGNORANCE… I’m going to be watching ‘The suite life of Zack and Cody’ on Disney Channel to get a good grasp of how often gender stereotyping is incorporated into our everyday television shows but goes unnoticed.

I watch this show often, but never with the intention of it being stereotypical in any way.

So today as I think about it if the characters were stereotyped, they would all be bias to one another’s gender. Girls would be the breadwinner’s, caregivers, nurturers, smarter, stay at home mothers. Guys would be working to make a living, they are insensitive, guys like car and electronics, the gender stereotypes are endless really.

They can be basically anything and everything depending on how they are perceived and by WHO they are perceived. Sometimes they depend on what someone has gone through in life and based off that they gender stereotype. As I watch I notice that the mother of Phineas and Ferb is a stay at home mother, she does everything there is needed to be done at home. Takes care of the kids and their problems, grocery shops, cleans, cooks, etc. The father is the breadwinner and is the only one who is bringing in the income to support the family.

It’s almost a typical old school American family. They have 3 children, 2 boys, 1 girl. Obviously Phineas and Ferb are the two young boys and Candice is their older sister. The whole show is about their sister always trying to get them (Phineas and Ferb) in trouble with their parents. I guess that’s the typical stereotypical sibling relationship always fighting for attention over the parents and to make one bad over the other and make one another more favorable than the other.

I didn’t really realize it at first but then when I thought about my own relationship with my siblings it was quite comparable we always try and nag on each other and get one another in trouble. Phineas and Ferb are always coming up with new inventions, playing with electronics computers and inventing unique things. Just doing things most boys do in the stereotypical way. While, their sister Candice is always going to the mall, hanging out gossiping with her girlfriends, always on the phone, constantly nagging on them, obsessed with boys.

The show is very stereotypical now that I think about it. It’s the classical guy/girl gender stereotypes. Candice is the girly girl who likes to gossip and shop and get her brothers in trouble while Phineas and Ferb are busy playing with gadgets of all sorts, not ever worried about Candice or what she’s doing, really involved with electronics and coming up with new inventions and having fun in their own little gadget-world you could say. A lot of commercials that come on and play in the mornings when all the kids programs are on are SUPER stereotypical.

For girls they advertise Barbie dolls of all sorts, toys for girls such as cool, unique hair designing tools, kitchen accessories that include fake ovens and what not to play in. Which is stereotypical cause they say mothers should cook and clean and then here they are starting kids off at a young age throwing them under such a stereotype. They have commercials advertising water guns, monster trucks, building tools and what not for the boys. After watching this show that I always watch but with the objective of stereotyping as I watched in my head I noticed so much more than I ever did.

It’s really sad that so many shows have gender stereotyping in them that goes unnoticed. It really actually (and excuse my language) pisses me off. That people interpret these things in television shows, their guiding the younger generation already in the wrong direction making them think that girls “do this” and guys “do this” and having them think basically in a box. I noticed that the show has the very typical stereotypes. Like I mentioned above. I can honestly say my thoughts have changed about this show and are different from what I thought before I had this objective in mind. 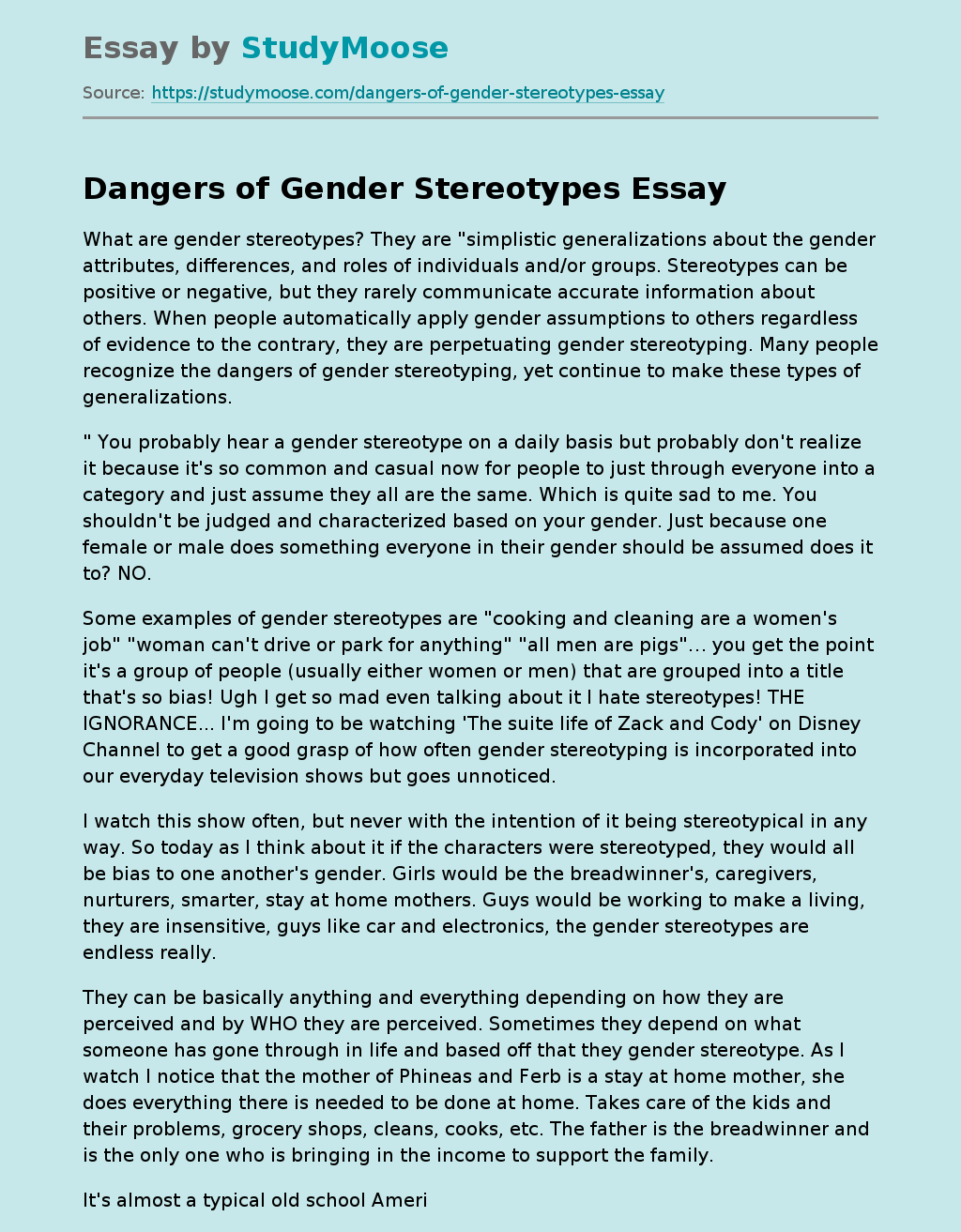