Driving can be a dangerous enterprise. You could be the very definition of a cautious driver, but you cannot control what the thousands of other drivers on the road are doing. After many years of driving in stressful and unpredictable traffic, one might find one of the main three categories of these drivers: under the influence, distracted and reckless drivers.

Drunk driving is the cause of most traffic-related deaths. Intoxicated drivers are perhaps the most dangerous condition to be in while driving.

Don't use plagiarized sources. Get your custom essay on
“ Dangerous Type of Drivers ”
Get custom paper
NEW! smart matching with writer

These people jeopardize the lives of those around them and their own lives. Alcohol impacts the driver’s ability to focus, making drunk drivers prone to speeding, tailgating, and not stopping on time to avoid obstacles ahead. Driving while fatigued is almost as dangerous as drunk driving. Factors that can lead to drowsy driving include insufficient sleep and driving long distances. Other conditions, such as narcolepsy, sleep apnea, or the use of medications that cause drowsiness can contribute to drowsy driving.

According to the Centers for Disease Control, common tasks resulting in distracted driving include sending text messages, talking on cell phones, using a navigation system (GPS), and eating while driving. The CDC considers texting to be the most distracting. According to distraction.gov, five seconds is the average time a driver’s eyes are off the road while texting. When traveling 55 miles per hour, that’s enough time to cover the length of a football field blindfolded. That’s plenty of space in which to cause a major accident.

Another type of distracted drivers is the Sunday drivers, which do not pay attention to what is going on around them and are mostly known by driving in an inexperienced or unskillful way.

Reckless driving is extremely dangerous and includes, among other things, swerving, weaving in and out of traffic, passing on the right, suddenly accelerating and braking, and even driving slowly in the left lane on the freeway. They are those who weave in and out of traffic causing one near-death experience after another. A good example is Speed Demons. Speeding is the number two cause of traffic fatalities. They break the speed limits everywhere they go. According to a survey from the Governors Highway Safety Association says, “That 42 states allow drivers to exceed posted speed limits of up to 10 mph before pulling them over for speeding.” (ENG, 2005) Most of these people are always late to where they are trying to go, so they have to driveway over the speed limit to get to where they are going on time. And finally the most dangerous are the one who never care about anyone else on the road, they fail to yield the right of way and causes about a fourth of accidents involving younger drivers, but failure to yield causes a majority of accidents among drivers 70 and older, according to the Insurance Institute for Highway Safety.

Driving can be a hard and annoying experience but is part of the daily life of most people. There is a lot of dangerous type of drivers out there who does not care about other people’s life or are not aware of what they are doing. Do you consider yourself one of them? 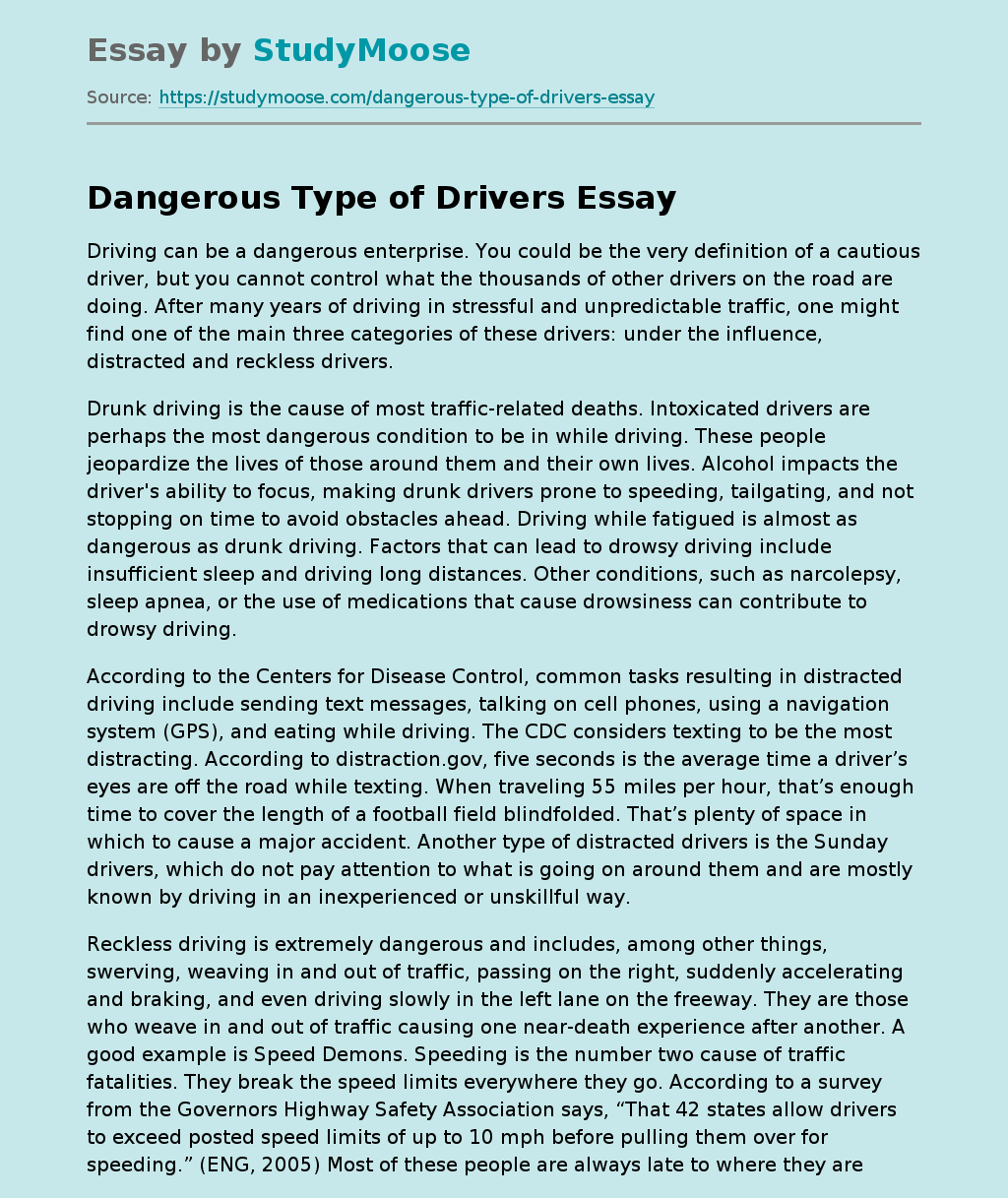