Foreshadowing – through the use of devices (see below) or narrative; Friel often hints at what comes later in the play, sometimes sneaky – in the first dialogue for example, Chris says “When are we going to get a decent mirror to see ourselves in? ” – this could be interpreted as Friel showing that the women are blind to the world around them, to their own inner trouble, and just how close their family is to the blink of collapse. It is a good line for Friel to highlight that at this moment in time, everything is as it should be and nothing has crumbled yet, but it will, and the sisters cannot foretell it.

Don't use plagiarized sources. Get your custom essay on
“ ‘Dancing at Lughnasa’, dramatic techniques and devices ”
Get custom paper
NEW! smart matching with writer

Use of symbolic devices such as the radio (the music foreshadows events in the play, hints at backstory, usually provides a sense of what the women feel inside but cannot express on the outside, used to reference context and ultimately link the women from their microcosm in Ballybeg to the wider world) or the kites (representing escape as a pair, possibly Jack and Gerry, or, when one considers the tortured faces, a foreshadowing of Rose and Agnes’s doomed leave.

Stage Directions – Friel’s stage directions are highly detailed and this shows that to Friel, every little character and stage detail is important, (takes the opening tableau for example. ) Each aunt has their own, very particular on stage personality, but these are certainly not 2D characters when Friel still leaves some questions unanswered to the audience – e. g; What is going on between Gerry and Agnes?

Why is it that Friel wants Agnes to fly up in a passion, ‘on the point of tears’ when Kate is badmouthing Gerry, but the situation between them is never explored in more detail? It makes the false memory concept all the more interesting, as the audience can forget that this is what Michael is supposed to remember as ‘more real than incident’ and ‘both actual and illusory’.

* The Unseen Boy – In ‘Dancing at Lughnasa’, the narrator is the adult Michael, and Friel chooses also to have the adult Michael reading the ‘boy’s lines, and the aunts must never address the boy.

This is a surreal concept, but both helps the audience remember that the whole play is Michael’s memory; “When I cast my mind back”… and also foreshadows Michael’s absence and escape later on in the play, or as a boy, his lack of understanding of the situation. Alternatively, it again highlights the surreal concept that Michael can remember things that may or may not have happened as he is not present in those scenes.

The False Memory – “But there is one memory of that Lughnasa time that visits me most often; and what fascinates me about that memory is that it owes nothing to fact…” The play is largely focused on Michael’s relationship with the memories of his past, as his interspersed blocks of narration illustrate, but there is the question raised that, in fact, did most of the play, where Michael isn’t present, even happen?

It is all supposed to be from his memory, so how can he remember something which isn’t true? The ending sets this question further in the audience’s minds when Michael talks about a memory that truly does have no factual ground at all, and you can see elements of this seeping in throughout the play itself, (such as blasts of thirties music or referencing to historical context) and you can see it played out as if peppered with bits of memory that didn’t necessarily happen at those times or in that order.

It does have a dream-like quality for these reasons, and only when we wake up do we realise something was strange – I believe this is the effect Friel intended to create for the audience. With memory, we often remember what stands out to us, not necessarily in the right order, but what Michael makes plain at the end is that his version of events is both real and imagined at the same time, and his memories become more true to feelings as they go further from the actual order of events. 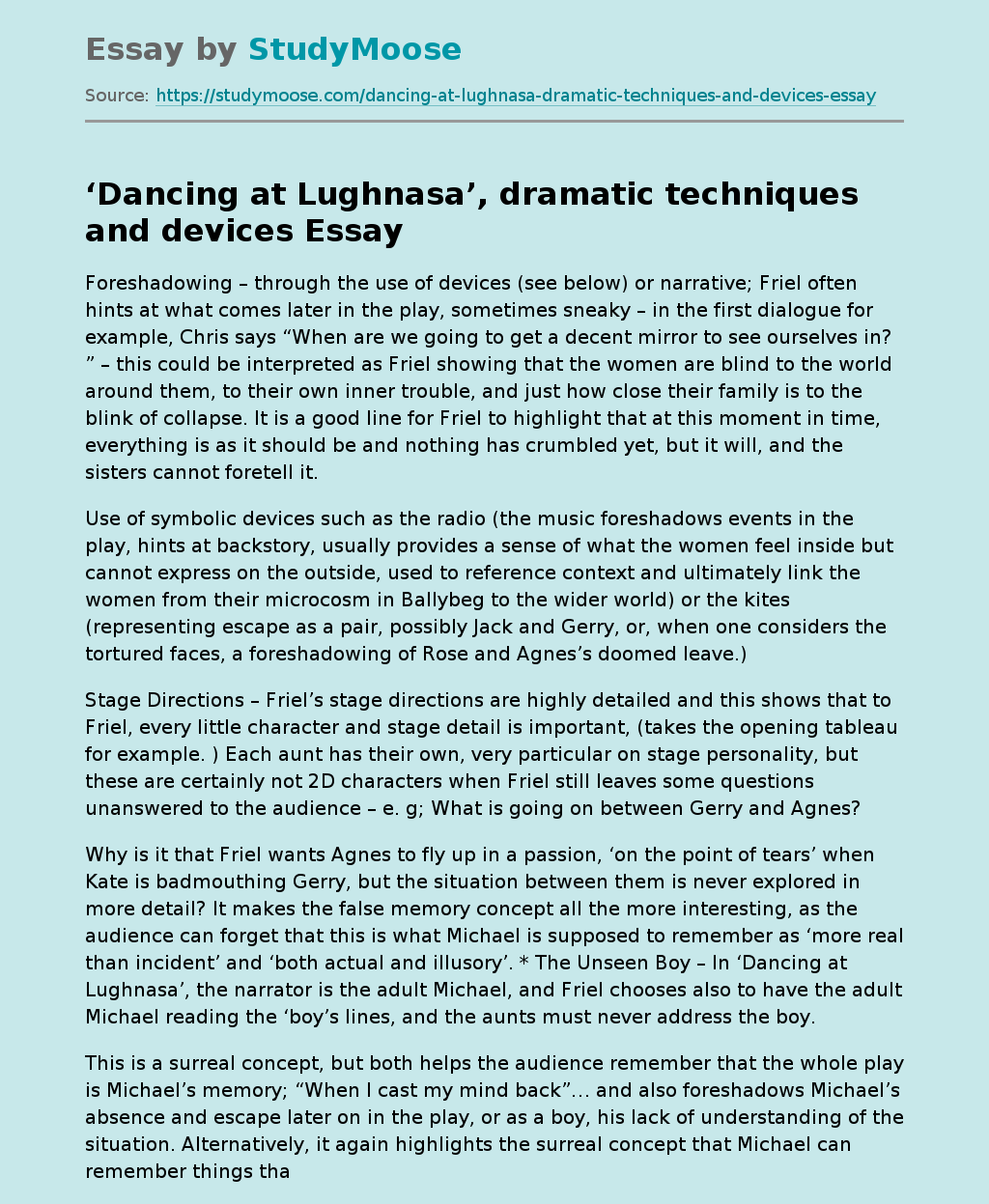