Alvin Ailey’s renowned choreography, Cry, has become an outstanding success as he represents the hardships of black women that have endured years of slavery and hardship.

Don't use plagiarized sources. Get your custom essay on
“ Dance Composition Basics ”
Get custom paper
NEW! smart matching with writer

The piece is a solo performance by Judith Jamison, created for “all black women everywhere – especially our mothers”[1], and has impacted audiences worldwide as he takes them on a touching journey of desolate misery, violent oppression and prideful joy. Ailey uses a variety of dance techniques and elements of dance to portray the suffering of slavery in the African society, including core motifs, costume, music, space, time and dynamics.

The motifs presented are manipulated with these elements of dance to create phrases and portray the intent of the work, distinguishing the changes in mood and tone throughout the sections. Ailey has used various manipulations of motif to present his perception of the African American women who have endured years of slavery. Divided into three sections, the piece introduces the dancer in white costuming as she holds the main motif of the phrase, the white shawl.

The dancer begins holding the shawl above her head with her arms outstretched, and brings it forward in front of her in a slow and sustained manner as the music begins to play.

Holding it carefully across her body, the shawl can be seen as representative of her life and her values, and her use of slow and sustained dynamics symbolises the worth of the scarf. As she places the white fabric carefully downstage centre, she throws both sides of the scarf in opposite directions and swipes her hand over the scarf gently on a sagittal plane across her body, repeating the movement on either sides. The swiping movements across her body are manipulated through the dance are manipulated as the movement is performed faster and with increased torso generated movement. The arm movements are also changed in direction as she reaches her arms above her and on a frontal plane. The arm movements in context can be viewed as a pleading for help and escape from the suffering of slavery. The motif of the scarf or shawl is consistent as she expresses her exasperation behind the scarf, dancing centre stage and across its length. This suggests she is confined by her own body as she lives a life of slavery because of her ethnic background.

The phrase continues as she picks up the scarf off the floor and falls to her knees, using the scarf to wipe the floor in a quick and staccato dynamic. This movement reflects her daily routine of hard work and oppression, and the use of sharp dynamics suggests her exasperation and need to escape from her confinement. The repetition of throwing either side of the scarf in opposite directions is repeated, and now followed by the lifting of the scarf in a vigorous and erratic manner. The repetition of this movement followed by the reaching suggests a new stage in her life as she proceeds to wrap the scarf around her body, lifting her torso and head in the process as she projects to the audience. The projection signifies pride within herself and her heritage, as the scarf is representative of her life and her values. Ailey furthermore underlines the pride of her heritage as she wraps the scarf around her head, as if to ‘wear’ her dignity and honour. The motif of the scarf throughout this phrase has been manipulated to represent different things, such as her value of life, her struggles with slavery and her pride and honour of her heritage. Ailey uses repetition of movement and abstraction to portray her journey, using slow and sustained movements to represent the worth of the scarf as she is careful and wary as she holds in it front of her, and quick, vigorous movements to symbolise the exasperation and struggle of being a slave.

The movement representation of African American women’s struggles can be contrasted to the first phrase of Section Three, in which Ailey uses movement to symbolise the ecstatic joy of overcoming oppression. The phrase begins with the dancer in a deep plie with back and head hunched over. From this position, the dancer proceeds to lift herself by performing a full-body roll up. Once she is standing tall and projecting to the audience with her head and torso lifted, the R&B song; ‘Right On. Be Free’ begins to play, immediately introducing a sense of freedom and liberty. The dancers’ dynamics reflect the beat of the music, moving her hips and torso in a fast and jerky manner. This release of energy symbolises the joy of overcoming the oppression of slavery, and is used throughout the phrase in different manipulations. The first manipulation of the strong release of energy in the hips and torso is seen as the dancer throws her arms and legs in the air in different directions. This symbolises the boiling sensation of joy and happiness has overcome the dancer entirely and is now moving freely without limitations. The pathways used in this phrase are unsystematic as she moves around the stage randomly and without any sense of order, although her use of levels is mostly high and projected above her as if to praise and cheer in her newfound freedom.

The second manipulation of the torso generated movements can be seen in the circular leaps and turns across the stage. This, in conjunction with the continuous torso generated movements reinforces the liberty of movement as she excitedly turns and pirouettes around the stage. The repetition of the torso generated movements and reaching of the arms above her highlights the will to endure the years of slavery in order to achieve freedom, and the success in that particular endeavour. The dancer is once again dancing behind the scarf laid out in front of her, in which before symbolised the confinement of her own body, but with the contrasting music and overall tone of this phrase through her use of dynamics, it is now symbolising the acceptance of her turbulent history and the pride she has with overcoming it. This phrase is important as Ailey uses it to communicate the meaning it had within the African-American women and how the slavery has impacted them emotionally, using fast, jerky dynamics in contrast with the slow and sustained burden and heaviness of the slavery. In conclusion, Alvin Ailey’s Cry successfully represents the hardships and struggles of the African-American slaves through his use of dance techniques and elements of dance, as he manipulates motif and dynamics to symbolise the journey of slavery and connect emotionally with his audiences.

Ailey uses a variety of manipulations including changes in levels, the use of abstraction, the use of costume (the scarf) and dynamics such as a contrast in slow and sustained movement with fast and jerky release of energy. Through comparing and contrasting two different movement phrases, we are able to see the struggles and fights for freedom in the journey of black women who have endured years of slavery and oppression. 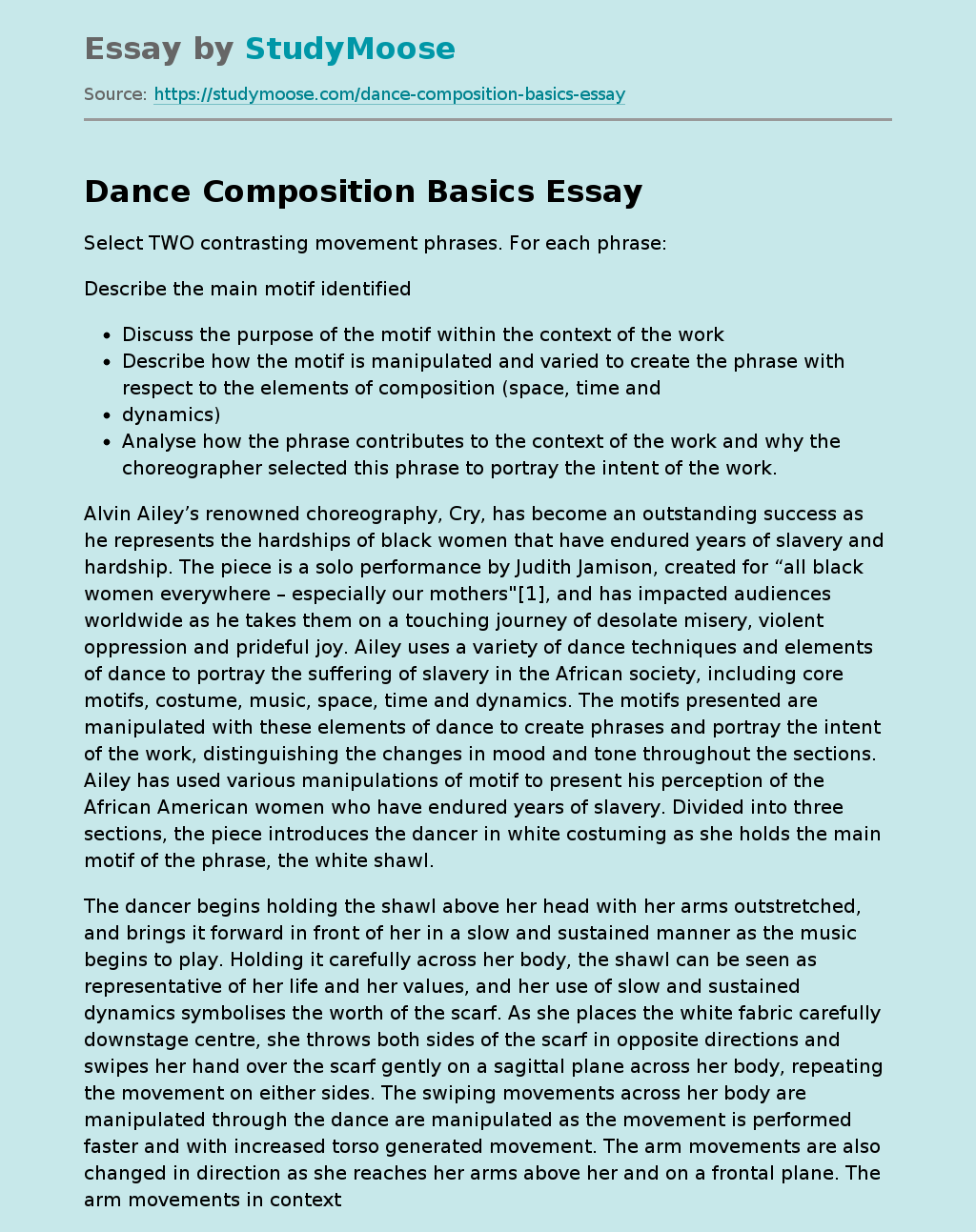