When you take everything into detail, you will notice that the artist, Anthony Van Dyck, painted Icarus (left) very pale. While Daedalus, Icarus’ father, was painted with a darker complexion. The background resembles the color gray, whereas in the story Daedalus and Icarus are surrounded by brick walls, with a lone window that will soon become their escape route. I took into account that Anthony Van Dyck dressed Daedalus in a toga, whereas Icarus is trying to cover himself with what seems to be a blanket that resembles the color of his father’s toga.

The wings seem to be more life-like then described in the story. In the story it states that Daedalus made the wings from wax and feathers, and that is what led to the death of Icarus. To conclude, Anthony Van Kyck used pale colors that seem to bring to mind death.

As I said before, Anthony van Dyck used pale colors to paint and this seems very smart because it seems that there is a hint of sadness.

With Icarus’ coloring it seems as if he is already dead and the blanket is the burial shroud that the ancient Greeks were either buried in or burned in. Like I said before, the background is gray and unlike the story, it doesn’t show a brick wall with a lone window. This once more brings to mind that it is to foreshadow the tragic end of Icarus. Daedalus seems to have been painted with a darker complexion than his son Icarus which tells you that Daedalus will stay alive and well.

If you take into account what the characters are doing in the painting you will notice that while Daedalus is trying to explain how to use the wings, Icarus is daydreaming about flying. This seems to be the reason for his later on demise. Sadly this paintings shows nothing of Icarus’ actual demise, but Anthony Van Dyck does a wonderful job of showing the creation of the wings and the reason of Icarus’ downfall.

The morals of Daedalus and Icarus were listening to superiors, and fear in god(s). The reason for ,listening to superiors, being incorporated with the story is because if Icarus had listened to his father than he would have never flown to his doom. This is shown in the painting where Daedalus seems to be explaining something to Icarus, but Icarus looks to the distance as if already imagining his upcoming flight. In the book Daedalus explains to Icarus that if he flies too low the ocean spray will cover his wings and make him too heavy to fly. If he flies to high then the sun’s heat will melt the wax and cause him to fall into the ocean, where the strong waves will drown him. Icarus, despite his father’s warning flies high believing he could go higher then the gods themselves and then plummets to his death because the sun’s heat melted the wax. The reason this has to do with fearing the gods is because since he believed he could achieve something that gods could angered them. In a way the gods did repay Icarus with misfortune, because Apollo is the sun god and it was his heat the melted the wax and sent Icarus to his watery grave. 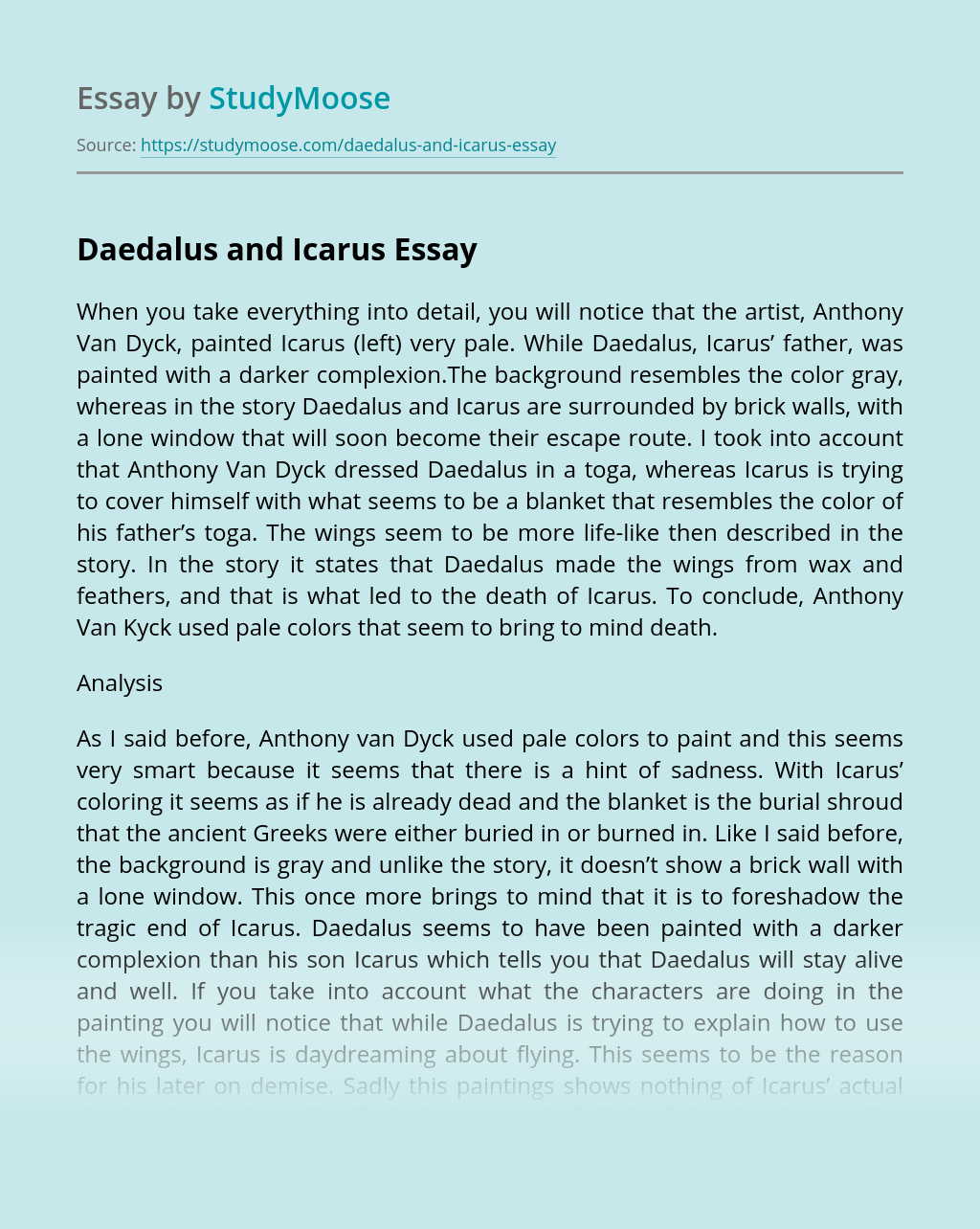 Rate this post The reclining female nude has actually been a recurring image in the history of European art. Each artist through time approaches the subject in a various, personalized way. An earlier example of the reclining naked is Giorgione’s “Sleeping Venus,” created around 1510(see fig. 1). His naked is painted using the clair obscur...

"Watson and the Shark" by John Singleton

Get Essay
Baroque and Impressionism

Rate this post Baroque art refers to the style that would be found in Europe and North and South America during the 17th and 18th century. The Catholic Church heavily influenced their art, as well as the Protestant rising up during this time. There was an emphasis on unity and harmony in all of the...

Rate this post In the painting Street Scene, Pink Sky, Paris, there are several elements that make the painting a unique piece of art reflecting the contemporary feeling of the expressionistic and post impressionistic movements of the early twentieth century. James Wilson Morrice expresses these movements completely in this painting, which is a masterwork of...

Madonna of the Meadows

Rate this post Mark Rothko is one of the important figures in the generation of painters. His work still draws attention to many people around the world. Born in Dvinsk, Russia (in what is now Latvia), Marcus Rothkovich was the fourth child of Jacob Rothkovich, a well to do pharmacist and his wife Anna Rothkovich....

Rate this post “I never knew of but one artist, and this is Tom Eakins, who could resist the temptation to see what they think ought to be rather than what is. ” – Walt Whitman Thomas Eakins, was one the most important painters of American Art History. He also was an photographer, sculptor, and...