Consult your textbook and trustworthy Internet sites to answer the following questions: 1. Which organs are affected by cystic fibrosis? What are the disease symptoms? Organs that are affected by cystic fibrosis include the lungs, pancreas, liver, sweat glands, reproductive organs, nose and sinuses. The symptoms of cystic fibrosis include coughing with mucus coming up, wheezing, breathlessness, decrease in ability to exercise, lung infections, inflamed nasal passages, stuffy nose, bad growth, intestinal blockage, severe constipation and greasy foul smelling stool.

2. Draw a pedigree showing the family history for CF in Sarah’s and Michael’s families.

Turn in your highest-quality paper
Get a qualified writer to help you with
“ Cystic Fibrosis Case Study ”
Get high-quality paper
NEW! AI matching with writer

3. Construct a Punnett square to demonstrate why Sarah concluded that she and Michael could not have an affected child (assuming that she does not carry a CF mutation).

Since Sarah jumped to the conclusion that she did not carry any recessive alleles for CF she thought that her and Michael’s baby wouldn’t have CF. So when you cross what she thought she had CC with Michael’s carrier genotype Cc you will have a baby with a 50% chance of being normal and 50% of being a carrier, but would not have CF. The cross between Cc x CC is shown below.

4. If Sarah were a carrier, what would be the chance that she and Michael would have an affected child? Show the Punnett square.

5. Look closely at the section on “Allelic Variants.” Is the delta-F508 mutation the only known alteration of the CFTR gene? No delta-F508 mutation is only one of many alteration of the CFTR gene. For example other alterations are 6. As you look at the list of Allelic Variants (starting with .001), how does the information in brackets (e.g., [CFTR, PHE508DEL]) describe each mutation? This information describes what amino acid is located where the mutation was located.

8. For each mutation (allelic variant) listed below, explain how the mutation would affect the production of (1) the mRNA and (2) the protein encoded by the CFTR gene. As an example, the first case is completed for you.
• .0001 CYSTIC FIBROSIS [CFTR, PHE508DEL]

The 508th triplet codon, which normally codes for phenylalanine, is deleted. Consequently, the CFTR mRNA is 3 nucleotides shorter than normal, and the CFTR protein is one amino acid shorter, missing its 508th unit.
• .0003 CYSTIC FIBROSIS [CFTR, GLN493TER]

There was a G to T change in nucleotide 1609 in exon ten. The effect of this nucleotide change mutation was a premature stop codon created at position 493.
• .0004 CYSTIC FIBROSIS [CFTR, ASP110HIS]

A C to G change in the nucleotide sequence in the fourth exon caused the mutation. The result of this mutation was a change from an aspartic acid residue to a histidine one.
• .0019 CYSTIC FIBROSIS [CFTR, 2-BP INS, 2566AT]

This mutation was from an insertion of two nucleotides. AT was inserted right after nucleotide 2566 on exon 13. This resulted overall in a frame shift mutation.
• .0008 CYSTIC FIBROSIS [CFTR, IVS10, G-A, -1]

This was a splice mutation that changed nucleotide-1 in intron number ten from G to A. As a result a splice site was destroyed.
• .0064 CYSTIC FIBROSIS [CFTR, IVS12, G-A, +1]
A G to A switch in nucleotides at the position 1 donor site caused skipping over exon 12
. • .0123 CYSTIC FIBROSIS [CFTR, 21-KB DEL]
This is a large mutation. This mutation deletes 21,080 bp ranging from exon 1 to exon 3. This resulted in deletion of exon 2 and exon 3. This large deletion also caused a premature termination signal in exon 4. 9. Sarah wondered how all these different mutations can cause the same disease. As the genetic counselor, how would you explain this to Sarah and Michael? All these different mutation can cause the same disease because they all occur on the CFTR gene. Even if one amino acid is changed on the CFTR there is going to be a possibility of cystic fibrosis occurring. Also different mutations can cause different severities and traits of cystic fibrosis.
Part IV: The Test

There are 40 mutations that can be detected by this test, but two were removed because one of the mutations was decided to be a polymorphism and the other was too rare to test for. 12. What criteria did researchers use when determining which mutations to include in the Tag-It test? Researchers used a Luminex bead system which develops reagents for multiplex molecular analyze. By using this bead system, the researchers were able to tell that this analysis showed that it detected the 25 mutations on the original reagent. These 25 mutations were then looked at by researchers. Two of the mutations were decided to be thrown off the original list.

14. As the genetic counselor, explain to Sarah and Michael why you said “not exactly” when Sarah asked if it was safe to conceive a child. There are more mutations on the gene than you were screened for. We didn’t test the ones that are so rare, because the possibility of you having them is very low. There is a chance that you could be a carrier, but it is very unlikely. So there is a chance that your child could have CF because Michael is a carrier and we aren’t for sure you’re not a carrier, but it isn’t very likely that your child will have CF. 22. (Zack)

If I was in this situation, I would chose to adopt a child. The reason is there is a risk of having a baby with CF, and I wouldn’t want to take that small chance. 22. (Krickett) It seems to me that Sarah and Michael really want to have a child of their own. So, if I was them I would choose to get pregnant and continue with the pregnancy no matter what. Since there is not really a huge chance of their child getting CF then I would go ahead and see what the outcome would be when having the child. 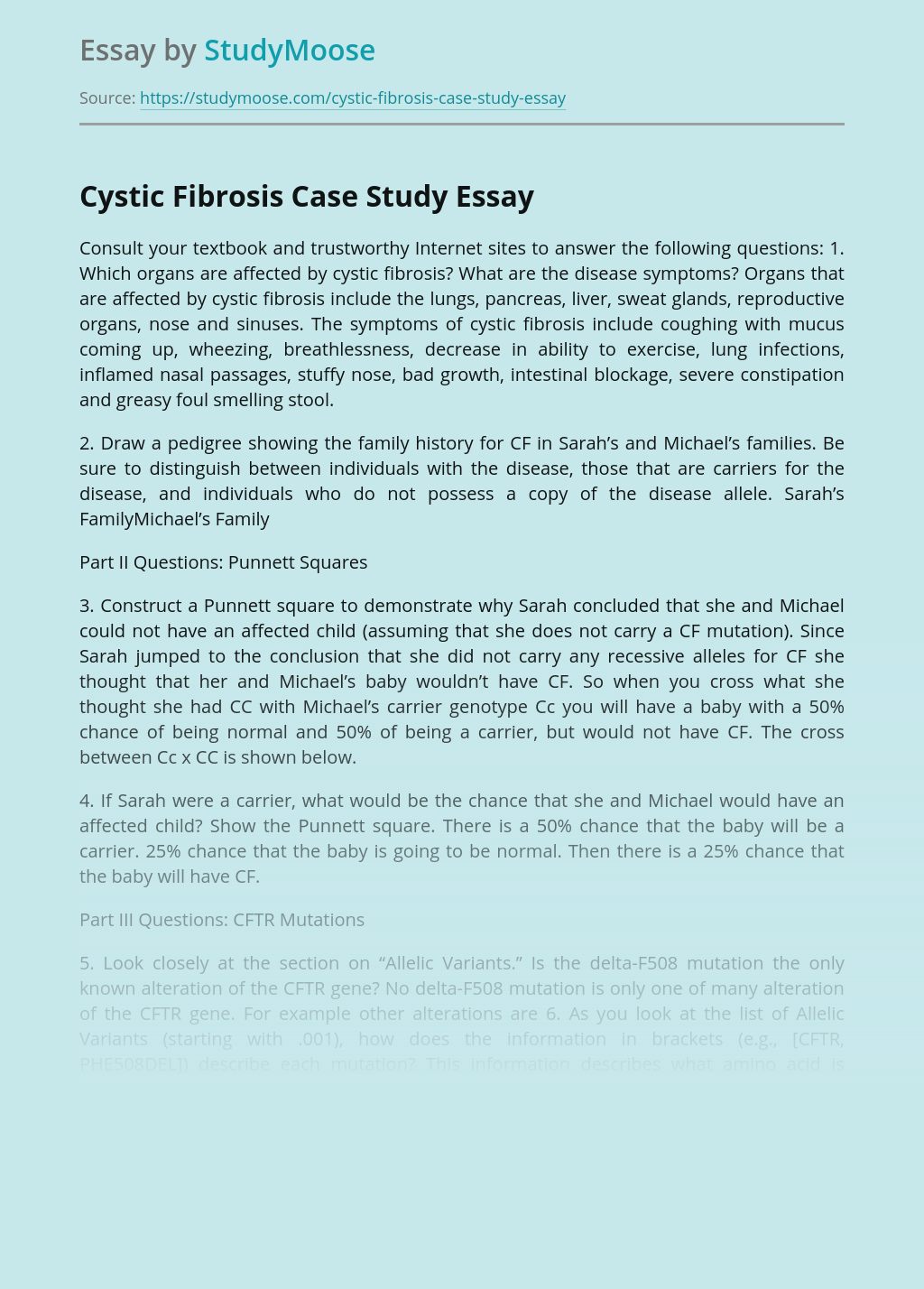 Turn in your highest-quality paper
Get a qualified writer to help you with
“ Cystic Fibrosis Case Study ”
Get high-quality paper
Helping students since 2015
Stay Safe, Stay Original