Before we get into the major cyber terrorism threats that we all have to deal with I wanted to first define what cyber terrorism is. According to the U. S. Federal Bureau of Investigation, cyber terrorism is any premeditated, politically motivated attack against information, computer systems, computer programs, and data which results in violence against non-combatant targets by sub-national groups or clandestine agents Unlike an annoying virus or computer attack that results in denial of service, a cyber terrorist attack could lead to physical violence or extreme financial harm.

Don't use plagiarized sources. Get your custom essay on
“ Cyber Threats ”
Get custom paper
NEW! smart matching with writer

According to the U. S. Commission of Critical Infrastructure Protection, possible cyber terrorism targets include the banking industry, military installations, power plants, air traffic control centers, and water systems. Cyber terrorism is often referred to as electronic terrorism or information war. Based on recent reports and the information presented to congress, America has a long way to go before security threats are adequately addressed. Almost half of 2,131 U. S. ompanies polled had no formal security policies in place, and most relied primarily on user passwords and multiple logons for protection.

Only 49% of U. S. companies had plans to raise user awareness of policies and procedures in the next 12 month. Unbelievably only half of 150 companies surveyed by InformationWeek Research one week after the terrorist attacks said that they plan to reassess the security of their facilities in light of those events. We need more people to be doing more creative thinking about computer security, than those who are trying to attack us.

First, “It is easy to envision a coordinated attack by terrorists, using a conventional or small-scale chemical device, with cyber attacks against law enforcement communications, emergency medical facilities, and other systems critical to a response. ” Second, “it is conceivable that terrorists could mount a cyber attack gainst power or water facilities or industrial plants – for example, a commercial chemical plant that produces a highly toxic substance – to produce casualties in the hundreds of thousands. ” The report adds that “the most likely perpetrators of cyber-attacks on critical infrastructures are terrorists and criminal groups rather than nation-states. ” Denning, 2003 So, what can be done proactively to prevent cyber terrorism and cyber crime attacks? The first and easiest thing for you to do is harden and secure your systems by establishing secure configurations.

Next you can prepare for intrusions by getting ready for detection and response. You also need to make sure you detect intrusions quickly when they do occur. You also need to respond to intrusions quickly to ensure you minimize the damage to your systems. Lastly you need to improve your security to help protect against future attacks. There are thousands of ways to help protect against cyber terrorism threats but I think the following are the simplest and most effective ways to start, Make sure all accounts have passwords and the passwords should be unusual, difficult to guess.

Be sure to change the network configuration when defects become known. Constantly check with venders for upgrades and patches that can be installed to help strengthen your defenses. You can also choose to audit systems and check logs to help in detecting and tracing an intruder. 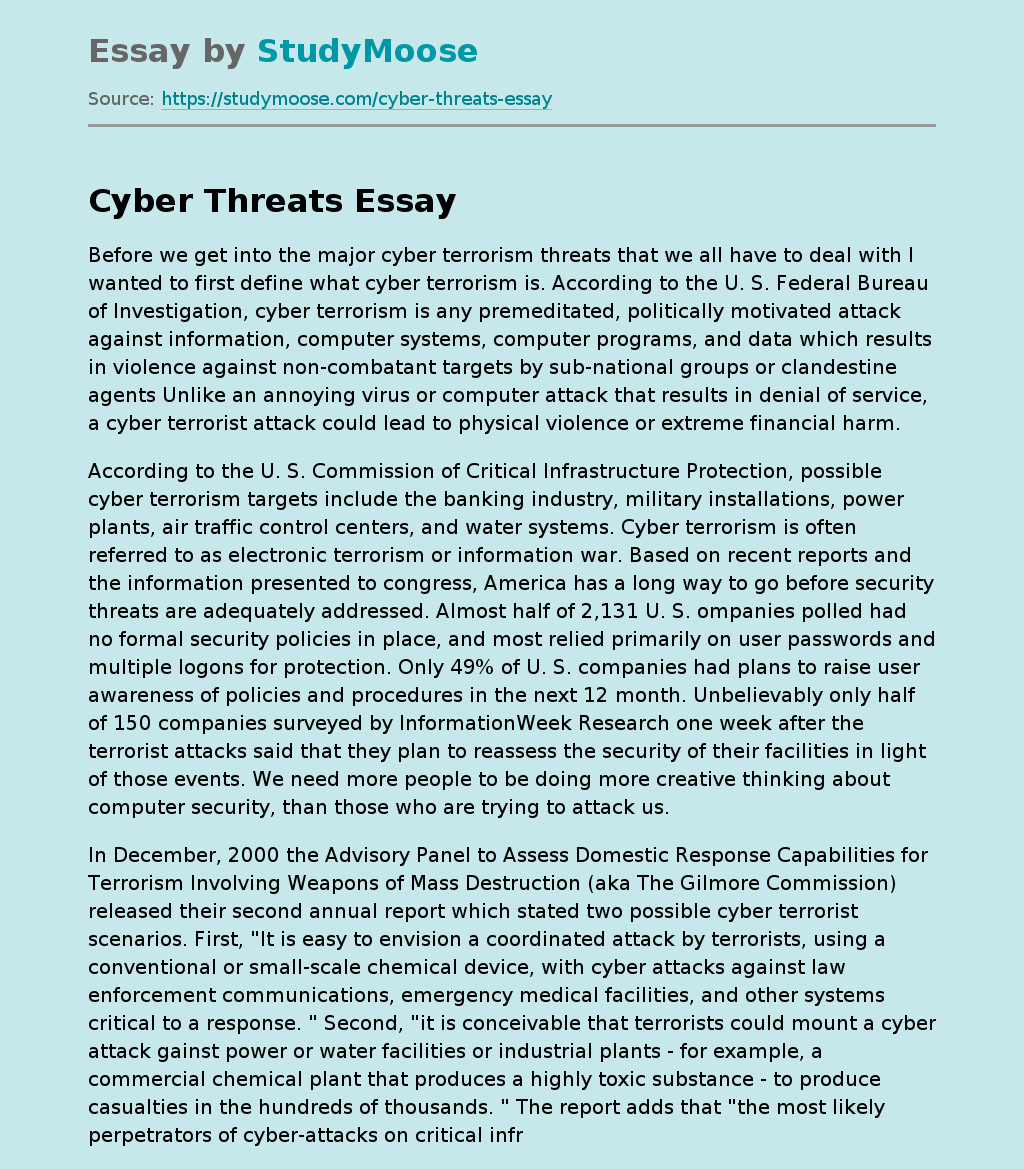