Can anyone who uses a computer be a victim to cybercrime? Yes, anyone who uses a computer has a chance of being a victim of cybercrime. Cybercrime has become a big issue in today’s society. Cybercrime is defined as crimes committed on the internet using a computer as either a tool or a targeted victim(Razali). Cybercrime can be committed by many people like computer geeks looking for bragging rights to businesses trying to gain an upper hand in the marketplace by hacking competitor websites, Rings of criminals wanting to steal your personal information and sell it on black markets, or spies and terrorists looking to rob our nation of vital information or to launch cyber strikes(Computer Intrusions).

Don't use plagiarized sources.
Get Your Custom Essay on Cyber Crime Research Paper Just from $13,9/Page

Cybercrime can be used many ways.The two main cause of cybercrime are identity theft and internet stalking. Cybercrime is very bad and and can hurt many people physically and mentally, people need to be more aware of the ways to get around cybercrime.

Identity theft is one of the main cause of cybercrime. Identity theft, also know as ID theft is a crime in which a criminal obtains key pieces of personal information, such as social security numbers or driver’s license numbers, to pose as someone else(Razali).

People will rummage through rubbish for personal information(dumpster diving), Retrieve personal data from redundant IT equipment and storage media including PCs,servers,PDAs, mobile phones, USB memory sticks and hard drives that have been disposed of carelessly. They are many more ways to also do this. Identity theft is bad because it can cause many people harm. The victims of identity theft can suffer from adverse consequences if they are held responsible for the perpetrators actions(Wikipedia). They could be sent to jail, prison or if it is really that bad they could die over identity theft. If you were associated in takeover identity theft, than the imposter just used stolen information to gain access to the persons existing accounts(Razali). If you were associated in true name identity theft then the imposter used personal information to open new accounts( Razali). The imposter might open a new credit card account, phone account, etc.

Some may however say that Identity theft is good, and they would be right. Identity theft is good for the government, police and FBI. They could use identity theft to catch a imposter causing a lot of harm. They could use it to take down another country that is doing ours harm. They could even make themselves look like a identity theft to see what other are planning. This could help stop it and save many people lives, money, homes, families and mainly their identities. Cyberstalking in the second biggest cause of internet crime. Cyberstalking is the use of internet or other electronic means to stalk or harass an individual, a group, or an organization(Wikipedia).

A number of key factors are in cyberstalking: False accusations, Attempts to gather information about victim, monitoring their targets online activities, encouraging others to harass the victim, false victimization, attacks on data and equipment, ordering goods and services, and arranging to meet. It is so easy to accomplish cyberstalking with all of the social media sites today like Facebook, Twitter, Myspace, etc. There are many types of cyberstalking. There is Stalking by strangers which means the cyberstalker could be a stranger or someone who has had a former/present relationship with the victim. There is Gender based stalking which is harassment and stalking based on the victims gender. 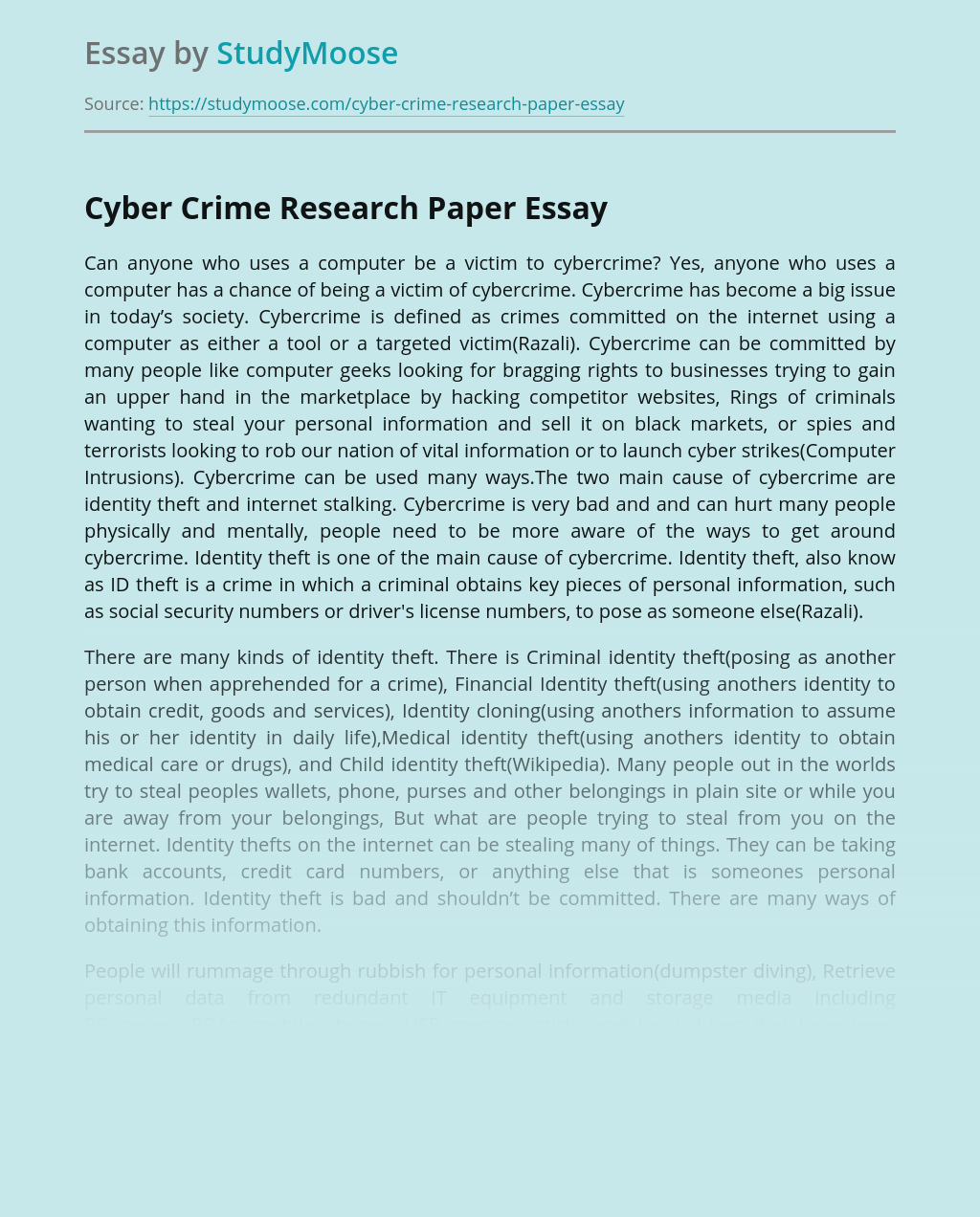 Most are articles written by different intellectual scholars in the criminal justice field all weighing in on what they believe the theory of “Deterrence” is and how it relates to the ability to deflect and or inhibit crime during war time, peace time and stately situations. In particular I found one article to be an...

If you do not follow the Wrongdoer Justice System carefully and what they represent it is simple to puzzle many departments within our states. The media and lots of members of the general public frequently commit this error when it concerns what Probation and Parole mean and their purposes. I myself utilize to incorrect these...

Get Essay
The Effects of Truancy on High School Students

1.1 Statement of Problem Truancy is defined as an unexcused absence. It is a common problem facing nearly all high schools across the nation (Baker, Sigmon, & Nugent 2001 p. Don't use plagiarized sources. Get Your Custom Essay on Cyber Crime Research Paper Just from $13,9/Page Get custom paper 1). High school truants contribute to...

Numerous study have found widespread racial bias in US criminal justice system. A new report issued by a coalition of civil rights organizations calls the “massively and pervasively biased” treatment on blacks and Hispanics by the US police and courts the major civil rights problem of the twenty-first century entitled “Justice on Trial : Racial...