This report has been prepared to analyze the current costing method at Competition Bikes, Inc. (CBI) and provide a recommendation for improvement. To support this analysis, the differences between traditional based costing and activity based costing will be examined, along with the benefits and drawbacks for each method. A cost-volume-profit evaluation with break-even analysis for both sales units and sales dollars for the CarbonLite and Titanium bike lines will also be provided. The main differences between activity-based costing and the traditional costing: Traditional costing includes both direct and indirect components.

Don't use plagiarized sources. Get your custom essay on
“ CVP Report and Costing Method for Competition Bikes, Inc. ”
Get custom paper
NEW! smart matching with writer

Indirect costs (overhead) are grouped together. There’s only one cost driver (such as direct labor hours) used to calculate costs regardless of what they are. Activity-based costing breaks down the overhead costs into activity cost pools. All overhead costs are then allocated into these activity cost pools. This method of costing does require more time to compute the cost to the activity yet it earns that money back plus dividends by having a more accurate forecast of the true costs that are associated with each activity.

In addition to a better understanding of costs, implementation of activity-based costing can drive improved financial results in the long run.

By looking at each product and what drives its specific costs, management can have a much more detailed sense of the true costs involved in producing each product. They can then compare the activity-based costs with the costing system they have been using to discover what products they may be overpricing, or underpricing for sale in the market.

They can also spot potential money wasting activities in their manufacturing process, and work to make those activities more efficient. If management has a better understanding of costs, they can present a stronger business case to get future capital projects funded. The downside to activity-based costing is that it requires a substantial commitment of personnel and financial resources up front. Management must be willing to examine their operations rigorously and the data that is gathered may be difficult to accept, particularly by those who are believe the current costing system is just fine and are resistant to change.

Traditional costing, on the other hand, is much easier to calculate than activity-based costing, and this makes manager’s jobs easier. However, traditional costing is so generally calculated that it may be hiding inefficiencies in the supply chain. Products may be overpriced or underpriced, and this can negatively impact the company’s bottom line in the long run.

By moving to the activity-based cost system, CBI could pinpoint if they have been overpricing items, losing market share to competitors. On the flip side, if they underprice an item, they are likely losing money as the price may be lower than what it costs to produce the bike. They would lose potential revenue to further fund research and development to improve the product for the future. If prices are significantly lower than those of the competition, customers may even hesitate to purchase the product, as they could wonder why the bike is priced so much lower than all the others in the market and have a perception that sub-par materials or manufacturing processes have been used. Since these bikes are a specialty product built to order, customers are generally not as price sensitive as shoppers looking for ready-made bikes.

By switching to the activity based costing (ABC) method, CBI is also taking advantage of the in-depth knowledge of costs that will result in savings for the company. In the overhead analysis, six manufacturing overhead items and their cost drivers are identified, with a comparison provided between ABC costing, and Traditional costing assuming 900 units produced for the Titanium line, and 500 units produced for the Carbonlite line. The cost driver for manufacturing overhead using the traditional method is not identified, but the totals are given in the Competition Bikes spreadsheet and are reflected below. Traditional costing method

It’s important to note that the manufacturing overhead totals are identical when calculated using both traditional and ABC methods. This is because it’s not a difference in overhead, but instead a change in where the overhead is allocated. In the case of CBI, the allocation is quite different between methods.

For the Carbonlite line, the total manufacturing overhead cost with ABC costing is $50,605 higher than with traditional costing. CBI had underestimated manufacturing overhead for the Carbonlite line by 18% using traditional costing. Looking at unit costs, the traditional method per unit cost is $1,359, while the ABC unit cost is $1,460. The unit cost calculated using ABC costing was higher than CBI had realized; they are likely underpricing this bike, losing out on potential revenues. A review of competitors’ prices may be in order, to evaluate what the market will bear, as well as an analysis of the impact of raising prices and how that affects sales. Once they have this data, CBI management can make an informed decision whether or not to adjust the Carbonlite sales price, and by how much.

Analysis:
Cost-volume-profit (CVP) analysis is a tool that managers and businesses often use to estimate future levels of operational activity needed to avoid financial losses, to break even, and to generate a profit. This analysis also helps to target future revenues. CVP analysis can also be used to estimate production levels needed to generate revenues sufficient to recoup capital expenditures such as operational expansion. CVP analysis examines changes in profits in response to changes in sales volumes, costs and prices. The basic CVP equation is sales minus variable costs = contribution margin. Sales revenues per unit for the Titanium product are set at $900. The variable cost per unit (costs that vary directly with volume) for the Titanium product is $679. Based on these numbers, the resulting contribution margin (sales revenue minus variable cost) per unit is $900 – $679 = $221. Contribution margin is the amount of profit left after variable costs are subtracted; therefore they can be considered the ‘contribution’ to profit for each unit sold.

To summarize, CBI would need to sell 1415 units of Titanium and 786 units of Carbonlite, generating sales revenues of $2,448,570 to break-even (revenues and costs are equal). A2b. Cost-volume-profit and break-even point evaluation: Variable and fixed cost increase scenarios Suppose management needed to increase the cost of direct materials by 10% as well as add $50,000 in fixed costs to the production facility. What effect would this have on the break-even point?

Because the equations are based on the contribution margin as well as the WACM, an increase in the cost of direct materials (variable costs) by 10% will have a significant impact. Let’s first examine how cost-volume-profit and break-even point would be impacted if management needed to increase direct materials cost by 10%. I will analyze the $50,000 fixed cost increase separately.

The contribution margins for both product lines decreased. Titanium decreased by 13%, and of particular note is the whopping 60% reduction in contribution margin for Carbonlite. This makes sense given that Carbonline has a higher variable cost and lower volume, so a percentage increase in variable cost has a greater impact. This product is even more expensive to produce in this scenario, and generating very low profits for the company at this point.

For this scenario, I assumed that variable costs remained unchanged from the current scenario (no 10% increase in variable costs) and that fixed cost for the production facility increased from $400,000 to $450,000.

With the sales mix proportion of 9 units of Titanium for every 5 units produced of Carbonlite, the WACM per unit is calculated as 221 (.643) + 111 (.357) = $181.71. CVS Summary: Since variable costs did not change in this scenario, the contribution margin per unit and weighted average contribution margin/unit are at the same level as the original example. 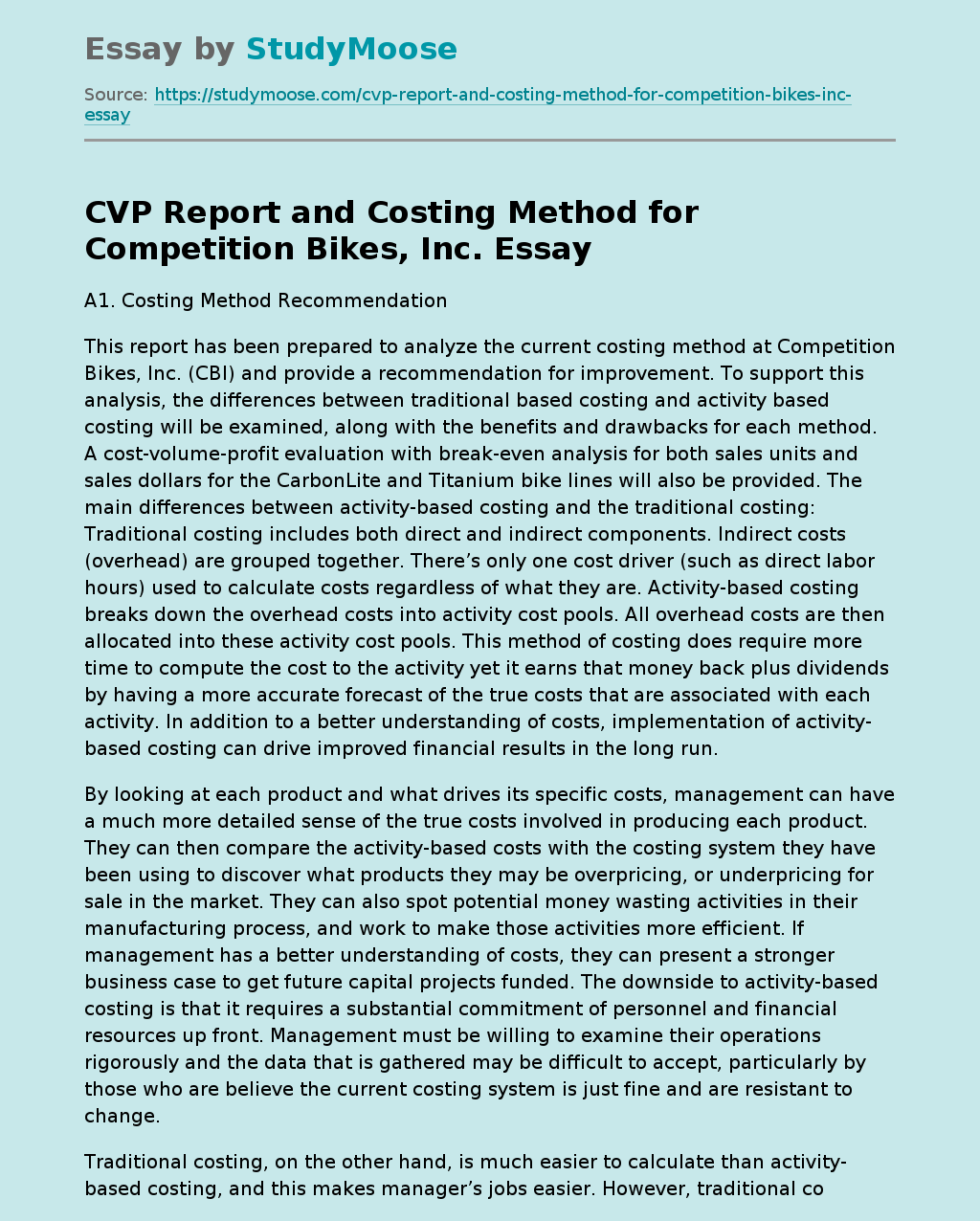