An alpaca (Vicugna pacos) is a domesticated species of South American camelid. It resembles a small llama in appearance. Alpacas are kept in herds that graze on the level heights of the Andes of southern Peru, northern Bolivia, Ecuador, and northern Chile at an altitude of 3,500 m (11,500 ft) to 5,000 m (16,000 ft) above sea level, throughout the year. Alpacas are considerably smaller than llamas, and unlike llamas, they were not bred to be beasts of burden, but were bred specifically for their fiber.

Don't use plagiarized sources. Get your custom essay on
“ Cute Animal-Alpaca ”
Get custom paper
NEW! smart matching with writer

Alpaca fiber is used for making knitted and woven items, similar to wool. These items include blankets, sweaters, hats, gloves, scarves, a wide variety of textiles and ponchos in South America, and sweaters, socks, coats and bedding in other parts of the world.

The fiber comes in more than 52 natural colors as classified in Peru, 12 as classified in Australia and 16 as classified in the United States. In the textile industry, “alpaca” primarily refers to the hair of Peruvian alpacas, but more broadly it refers to a style of fabric originally made from alpaca hair, but now often made from similar fibers, such as mohair, Icelandic sheep wool, or even high-quality English wool.

In trade, distinctions are made between alpacas and the several styles of mohair and luster. An adult alpaca generally is between 81 and 99 cm in height at the withers. They usually weigh between 48 and 84 kg (106 and 185 lbs).

Alpacas have been domesticated for thousands of years. The Moche people of northern Peru often used alpaca images in their art.

[4] There are no known wild alpacas, though its closest living relative, the vicuña (also native to South America), are believed to be the wild ancestor of the alpaca. The alpaca is larger than the vicuña, but smaller than the other camelid species. Along with camels and llamas, alpacas are classified as camelids. Of the various camelid species, the alpaca and vicuña are the most valuable fiber-bearing animals: the alpaca because of the quality and quantity of its fiber, and the vicuña because of the softness, fineness and quality of its coat.

Alpacas are too small to be used as pack animals. Instead, they are bred exclusively for their fiber and meat. Alpaca meat was once considered a delicacy by Andean inhabitants. Because of the high price commanded by alpaca on the growing North American alpaca market, illegal alpaca smuggling has become a growing problem. Alpacas and llamas can successfully cross-breed. The resulting offspring are called huarizo, which are valued for their unique fleece and gentle dispositions.

History of the scientific name

The relationship between alpacas and vicuñas was disputed for many years. In the 18th and 19th centuries, the four South American lamoid species were assigned scientific names. At that time, the alpaca was assumed to be descended from the llama, ignoring similarities in size, fleece and dentition between the alpaca and the vicuña. Classification was complicated by the fact that all four species of South American camelid can interbreed and produce fertile offspring. The advent of DNA technology made a more accurate classification possible. In 2001, the alpaca genus classification changed from Lama pacos to Vicugna pacos, following the presentation of a paper on work by Dr. Jane Wheeler et al. on alpaca DNA to the Royal Society showing the alpaca is descended from the vicuña, not the guanaco.

Alpacas are social herd animals that live in family groups consisting of a territorial alpha male, females and their young. Alpacas warn the herd about intruders by making sharp, noisy inhalations that sound like a high-pitched bray. The herd may attack smaller predators with their front feet, and can spit and kick.

Not all alpacas spit, but all are capable of doing so. “Spit” is somewhat euphemistic; occasionally the projectile contains only air and a little saliva, although alpacas commonly bring up acidic stomach contents (generally a green, grassy mix) and project it onto their chosen targets. Spitting is mostly reserved for other alpacas, but an alpaca will occasionally spit at a human. For alpacas, spitting results in what is called “sour mouth”. Sour mouth is characterized by a loose-hanging lower lip and a gaping mouth. This is caused by the stomach acids and unpleasant taste of the contents as they pass out of the mouth.

Alpacas use a communal dung pile, where they do not graze. This behaviour tends to limit the spread of internal parasites. Generally, males have much tidier, and fewer dung piles than females, which tend to stand in a line and all go at once. One female approaches the dung pile and begins to urinate and/or defecate, and the rest of the herd often follows. Because of their preference for using a dung pile, some alpacas have been successfully house-trained

Alpacas make a variety of sounds. When they are in danger, they make a high-pitched, shrieking whine. Some breeds are known to make a “wark” noise when excited. Strange dogs—and even cats—can trigger this reaction. To signal friendly or submissive behavior, alpacas “cluck,” or “click” a sound possibly generated by suction on the soft palate, or possibly in the nasal cavity. Individuals vary, but most alpacas generally make a humming sound. Hums are often comfort noises, letting the other alpacas know they are present and content. The humming can take on many inflections and meanings. When males fight, they scream a warbling, bird-like cry, presumably intended to terrify the opponent.

Alpaca fleece is the natural fiber harvested from an alpaca. It is light or heavy in weight, depending on how it is spun. It is a soft, durable, luxurious and silky natural fiber. While similar to sheep’s wool, it is warmer, not prickly, and has no lanolin, which makes it hypoallergenic. Alpaca is naturally water-repellent and difficult to ignite.[3] Huacaya, an alpaca that grows soft spongy fiber, has natural crimp, thus making a naturally elastic yarn well-suited for knitting. Suri has far less crimp and thus is a better fit for woven goods.

The designer Armani has used Suri alpaca to fashion men’s and women’s suits. Alpaca fleece is made into various products, from very simple and inexpensive garments made by the aboriginal communities to sophisticated, industrially made and expensive products such as suits. In the United States, groups of smaller alpaca breeders have banded together to create “fiber co-ops,” to make the manufacture of alpaca fiber products less expensive. The preparing, carding, spinning, weaving and finishing process of alpaca is very similar to the process used for wool.

The price for American alpacas can range from US$100 for a castrated male (gelding) to US$500,000 for the highest of champions in the world, depending on breeding history, sex, and color. According to an academic study, though, the higher prices sought for alpaca breeding stock are largely speculative and not supported by market fundamentals, given the low inherent returns per head from the main end product, alpaca fiber, and prices into the $100s per head rather than $10,000s would be required for a commercially viable fiber production herd. Breeding stock prices in Australia have fallen from a$10,000–30,000 head in 1997 to an average of A$3,000–4,000 today.

It is possible to raise up to 25 alpacas per hectare (10 alpacas per acre). as they have a designated area for waste products and keep their eating area away from their waste area, but this ratio differs from country to country and is highly dependent on the quality of pasture available (in Australia it is generally only possible to run one to three animals per acre due to drought). Fiber quality is the primary variant in the price achieved for alpaca wool; in Australia, it is common to classify the fiber by the thickness of the individual hairs and by the amount of vegetable matter contained in the supplied shearing.

Alpacas need to eat 1-2% of body weight per day, so about two 60 lb (27 kg) bales of grass hay per month per animal. When formulating a proper diet for alpacas, water and hay analysis should be performed to determine the proper vitamin and mineral supplementation program. Two options are to provide free choice salt/mineral powder, or feed a specially formulated ration. Indigenous to the highest regions of the Andes, this harsh environment has created an extremely hardy animal, so only minimal housing and predator fencing are needed. The alpaca’s three-chambered stomachs allow for extremely efficient digestion.

There are no viable seeds in the manure, because alpacas prefer to only eat tender plant leaves, and will not consume thick plant stems; therefore, alpaca manure does not need composting to enrich pastures or ornamental landscaping. Nail and teeth trimming is needed every six to 12 months, along with annual shearing. Similar to ruminants, such as cattle and sheep, alpacas have only lower teeth at the front of their mouths; therefore, they do not pull grass up by the roots. Rotating pastures is still important, though, as alpacas have a tendency to regraze an area repeatedly. Alpacas are fiber-producing animals; they do not need to be slaughtered to reap their product, and their fiber is a renewable resource that grows yearly. 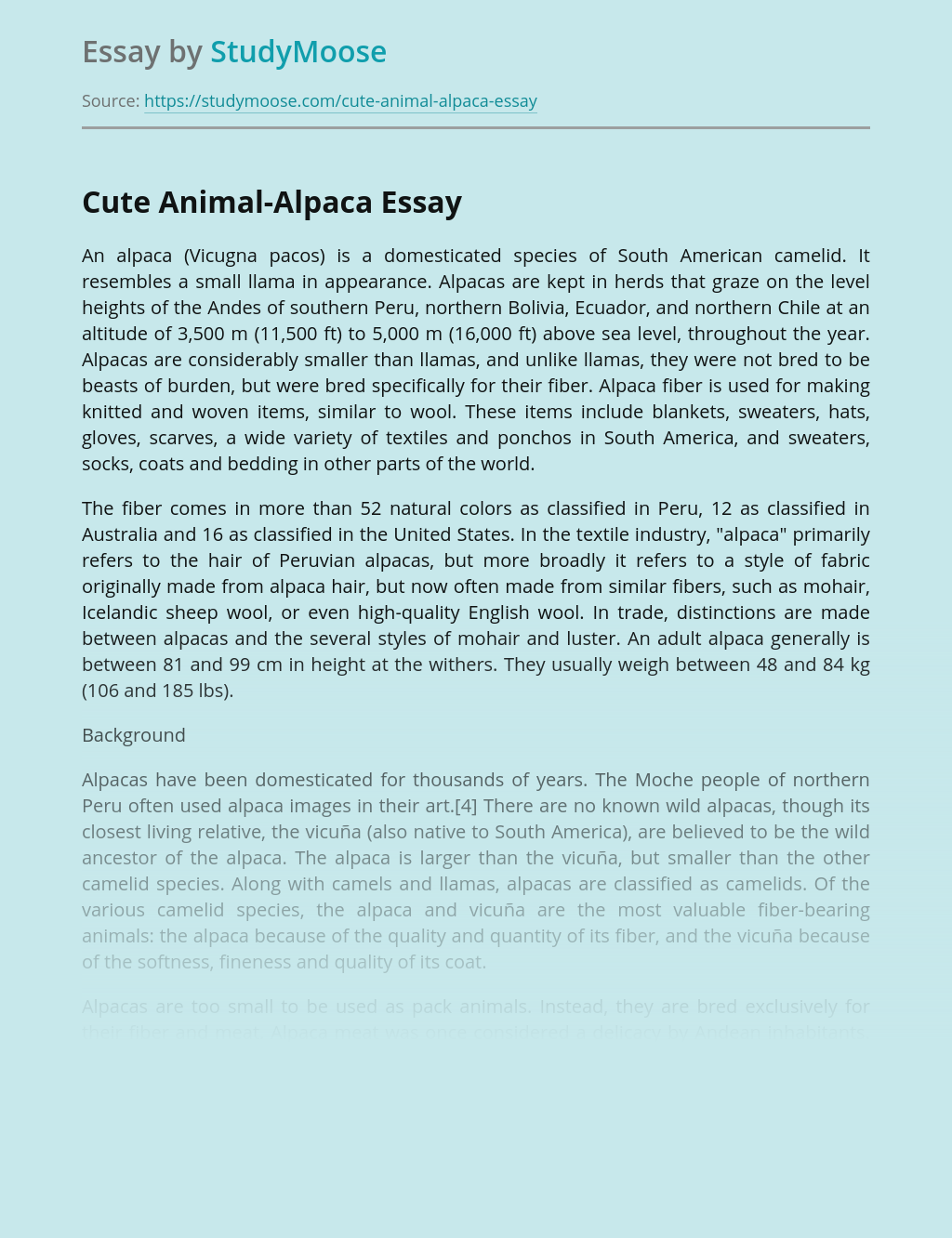